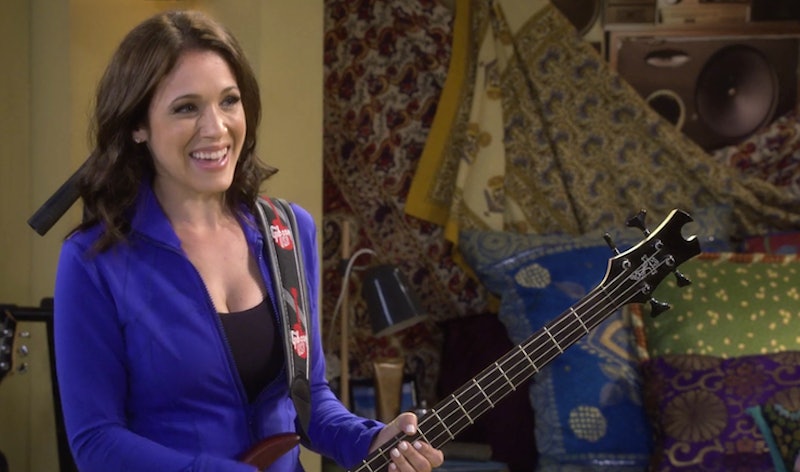 There are SPOILERS ahead for Fuller House Season 2. The long-awaited return of Gia, played by Marla Sokoloff, finally happened in the show's second season. The former rebellious teen character appeared in the Netflix sitcom all grown up as a mom — and she tried to lure adult Stephanie into trying her (new) vice. Sokoloff guest-starred in one Season 2 episode, but will Gia return for Fuller House Season 3? The series hasn't been renewed for a third season just yet, but in an interview with Bustle, the actor says she is definitely open to coming back to the series again for a possible Season 3.

"I would love to," she tells me when asked about the possibility. "I would be more than happy to. I don't have any expectations about it. I was super grateful just for that experience I just had. Whatever they want to do, I'm here."

The original '90s sitcom featured Gia as the rebellious teen who offered Stephanie cigarettes in the school bathroom — and who would later become best friends with the middle Tanner sibling. And Sokoloff recalls that her first appearance on Full House — which was filmed when she was 12 years old — was played for the audience at the taping of the Fuller House episode. "We were getting our hair and makeup done while watching it," she says. "It was so strange and it was also very emotional, because I was just a little kid and I had no idea what was going on in the world." View a YouTube clip from that 1993 episode below.

Fast forward to 2016: In the Fuller House episode "Girl Talk," Stephanie mentions that she's Facebook friends with Gia, who is now a mom and is an avid walker for a number of charities, and the middle Tanner sibling invites her old friend to join the revival of their old band Girl Talk. At first, Gia seems like she's left her famous cigarettes and rebellious ways behind her — until she pulls out a vape pen. Gia offers it to Stephanie to try, totally mirroring the cigarette scene from the original series.

And Sokoloff, who is now a mom herself, wholeheartedly approved of how Gia turned out in the episode. "Before I got the script, I thought in my own head: 'Where is Gia today? What would she be doing with her life?'" she says. "And I prayed that inside, she would still be innately Gia. So it couldn't have been better. The ending and her pulling out her vape pen — I was cheering as I read the script."

Gia may use her vape pen now, but her cigarettes have seemed to become her legacy. Sokoloff says fans asked her about Gia's cigarettes for years after Full House aired and Gia's new vice was a challenge to learn. "I think she had to go with the times. Vape pens are in," Sokoloff says. "I had to have the prop guy show me how to smoke a vape pen ... I practiced a lot."

So while Gia's cigarettes may be behind her, perhaps the character could potentially have a future on Fuller House Season 3 — vape pen and all.

More like this
The First Trailer For 'That '90s Show' Includes So Many Nods To The Original Series
By Jack Irvin, Alyssa Lapid and Grace Wehniainen
The 'Dead To Me' Creator Says Her Series Finale Idea “Felt Very True To The Show”
By Brad Witter
Jenna Ortega Wanted To Redo The 'Wednesday' Dance Scene For A Controversial Reason
By Grace Wehniainen
The ‘Emily In Paris’ Season 3 Trailer Teases Major Career & Love Crossroads For Emily
By Bustle Staff
Get Even More From Bustle — Sign Up For The Newsletter