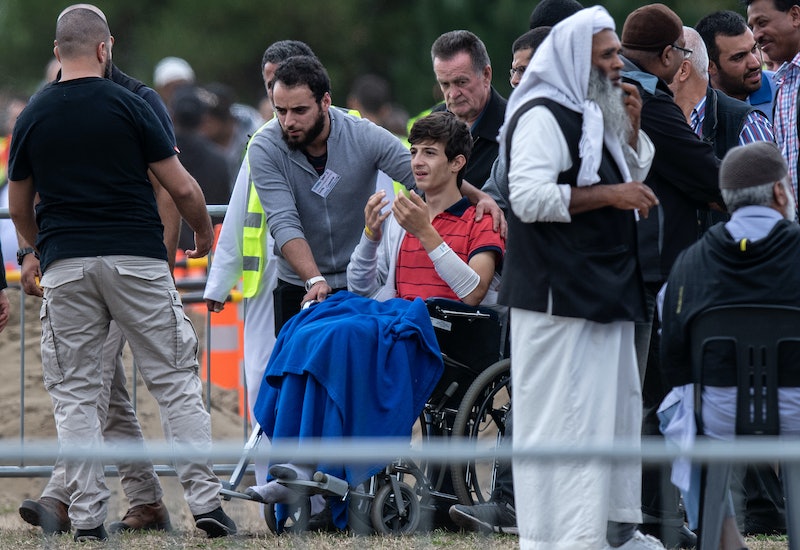 Five days after a terrorist attack at two mosques in Christchurch killed dozens, the community began to bury the victims on Wednesday. The first funeral for New Zealand mosque shooting victims was for two Syrian refugees. Khalid Mustafa, 44, and Hamza Mustafa, 15, were a father and son who had looked for sanctuary in the country after fleeing the war in Syria.

The Mustafas lived in Jordan for six years after leaving Syria and only arrived in New Zealand seven months ago, according to the London-based paper The Times. On Wednesday, mourners carried their bodies to Christchurch's Memorial Park Cemetery, where they were buried.

Hamza's 13-year-old brother, Zaed, survived the attack with serious injuries and is currently using a wheelchair. He attended the funeral with his mother. "I do not want to be here alone," he told mourners at the ceremony, per The Sydney Morning Herald.

One man has been charged with carrying out the attack, which took place on Friday and targeted two mosques in the coastal city of Christchurch. The suspect posted a white nationalist manifesto online beforehand, in which he called President Donald Trump "a symbol of renewed white identity and common purpose." He also live-streamed part of the shooting on Facebook.

The death toll for the attack has risen to 50, and the tragedy led to calls for tighter gun control in New Zealand. Prime Minister Jacinda Ardern has spearheaded that charge, with her cabinet reportedly agreeing to implement some reforms, per NPR.

Khalid's wife, Salwa, spoke to Radio New Zealand about her family's journey to the country. She said they were told that New Zealand was "the safest country in the world, the most wonderful country you can go," according to the Associated Press. "But it wasn't."

Their son Hamza had been attending Cashmere High School before he was killed. A 14-year-old Cashmere student, Sayyad Milne, was also murdered in the attack, as was former pupil Tariq Omar, per HuffPost. As the school was in mourning, Prime Minister Ardern paid a visit and urged students to focus their attention on the victims of the attack, as opposed to the suspected shooter.

"I cannot tell you how gutting it is," Ardern said Wednesday, referring to the Mustafa family, according to HuffPost. "A family came here for safety and they should have been safe here."

Mourners who attended the funeral told the AP that Zaed, whose leg and arm are both wounded, was determined to participate in the ceremony despite his injuries. "We tried to not shake his hand, and not touch his hand or his foot but he refused, he wanted to shake everybody's hand, he wanted to show everyone that he appreciated them," visitor Jamil El-Biza said. "And that's amazing."

More burials will take place as the week proceeds, though not all 50 victims have been identified yet. HuffPost reports that Arden has said New Zealand will broadcast the Islamic call to prayer nationwide this Friday, as well as hold a two-minute period of silence.