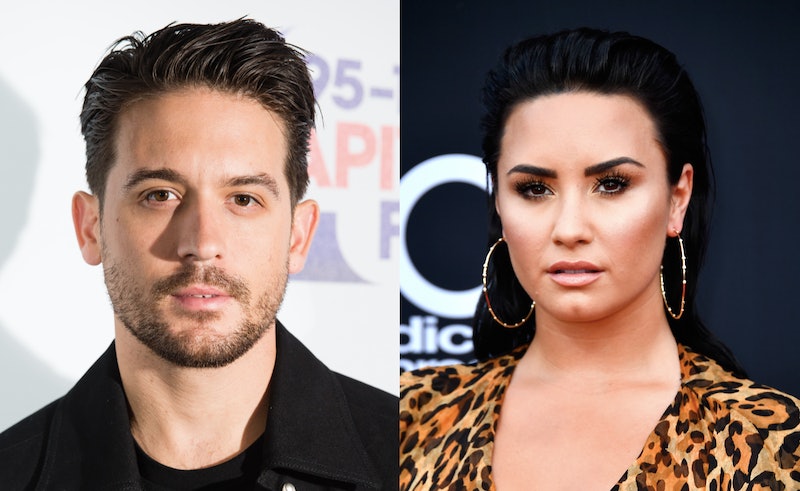 At the 2018 ESPY Awards held Wednesday in Los Angeles, G-Eazy commented on the Demi Lovato dating rumors that first began circulating on July 16 after the two were reportedly spotted holding hands. Us Weekly first reported the news, but as pointed out by Cosmopolitan, the report about Lovato and G-Eazy has since been removed. Whatever the case, G-Eazy is setting the record straight once and for all.

While chatting with Entertainment Tonight on the red carpet at the ESPYs, the rapper said, "No, she's just a friend." He didn't elaborate or comment any further, but his brief response can't get any clearer. It doesn't appear Lovato has ever publicly commented on the dating rumors. (Bustle reached out to Lovato's rep for comment, but did not receive an immediate response.)

According to Teen Vogue, initial reports claimed G-Eazy and Lovato hung out at a Hollywood club on July 14 and were later seen holding hands. The picture, which you can see here courtesy of Metro, shows a woman and a man holding hands, but their faces aren't shown. There's also another image provided by Metro apparently showing Lovato exiting the club. However, it remains unclear if it's actually them. (Bustle also reached out to Lovato's rep about these photos, but did not receive an immediate response.)

The reported sighting of the musicians came two weeks after Halsey confirmed her split with G-Eazy after they dated for a year. As previously reported, she wrote on her Instagram Story on July 3, "I normally keep this kind of thing private but provided our public nature I feel the need to inform my fans. G-Eazy and I are taking some time apart." She continued, "I’m eager to continue the upcoming passage of time dedicating myself to my art and my career, and the duration of my tour. I wish him the best. Thanks for respecting our privacy at this time."

G-Eazy also opened up to ET about his public breakup with the "Bad At Love" singer. While discussing his dating life being a topic of interest, he said, "It's just one of those things that comes with the territory. You trade in your anonymity in exchange for some of your success in the public eye." He added, "You have to remember the blessings and remember how grateful you are to be here in the first place and understand some of that is just what comes with the territory."

Neither of them have directly spoken about their split since Halsey's announcement in early July, but according to Us Weekly, at her July 14 concert in New Jersey Halsey talked about being single. "I learned recently it's OK to be alone," she told concert-goers. "Being alone is enough. The second lesson I learned is don’t sleep with your ex." Also, during Halsey's July 6 performance at Common Ground Music Festival in Lansing, Michigan, E! News reported she broke down in tears while singing the following lyrics from "Sorry": "Someone will love you / But someone isn’t me."

According to a source, who spoke with Us Weekly in July about Halsey and G-Eazy, "They are still very much in love and are optimistic about their paths inevitably crossing again in the future. They believe if it’s meant to be, it will be." The source claimed, "In the meantime, they are just focused on growing as artists, as people, and are doing their best to set a positive example for their loved ones and fans."

At this point, the only thing G-Eazy and Lovato seem to have in common besides being in the music industry is their hair color. The rapper showed up to the ESPYs with a new blonde look and Us Weekly reported Lovato teased a new blonder 'do on her Instagram Story on July 18.