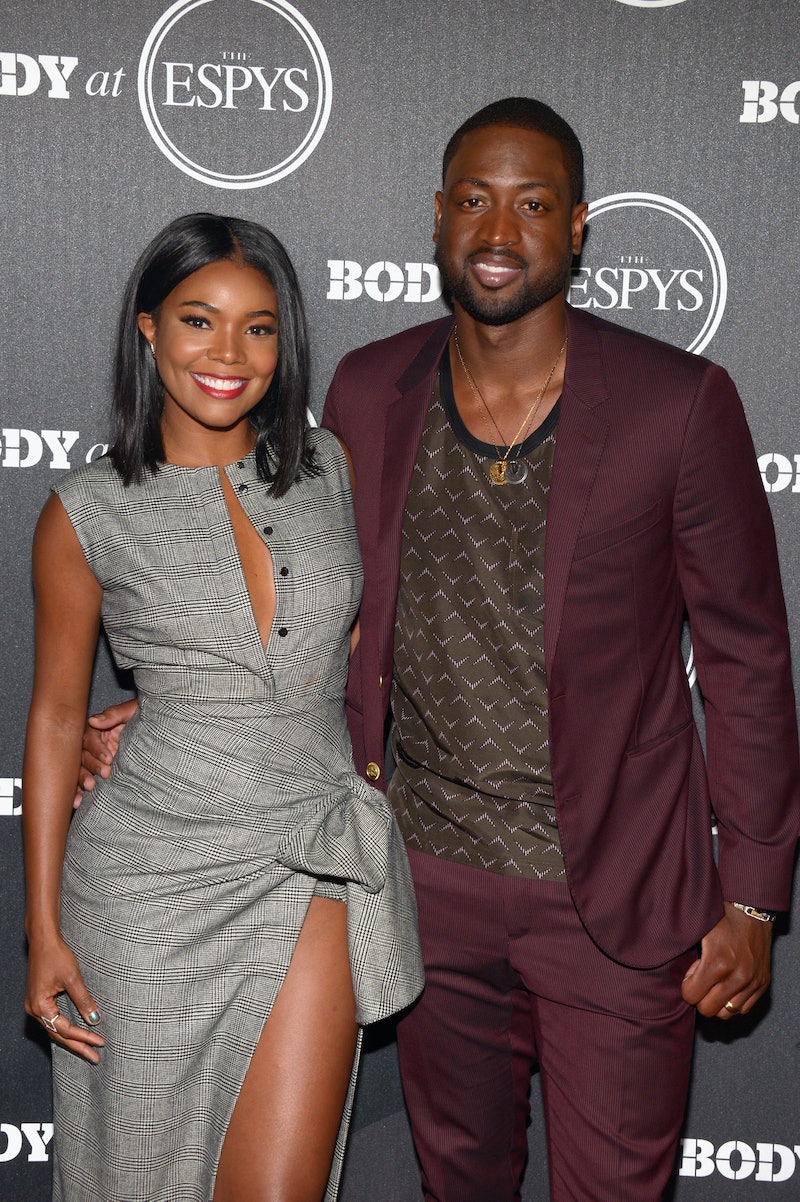 One week after announcing they welcomed their first child together, Gabrielle Union and Dwyane Wade revealed their baby's name, as E! News reported. To share the news, the basketball player unveiled some very meaningful new ink he recently got.

On Nov. 15, Wade posted a throwback to the time that he got a couple of new tattoos showing off his newborn daughter's name. He wrote in the caption for the Instagram snap:

"#TBT Goes back to that one night in China when i decided to get my daughters name tattooed on me. Kaavia James Union Wade! #paternityleave."

That's definitely a fun way to announce your child's name. And by the way, Kaavia James does have a really great ring to it.

As mentioned, this name reveal comes one week after Union and Wade surprised everyone with the news that they had welcomed their first child together via surrogate on Nov. 7. While this is the Being Mary Jane actor's first child, it is the athlete's fourth. According to E! News, he shares sons Zaire and Zion from his past relationship with Siohvaughn Funches and a son named Xavier from a different relationship. Union and Wade are also raising his nephew, Dahveon Morris, together.

On Nov. 8, the couple posted near identical captions and photos as they showcased their daughter for the first time. Although, at that time, they didn't release any details about their little one's name.

In their Instagram posts highlighting their baby news, they began their captions by posting some of the lyrics to Bill Withers' song "Lovely Day." They wrote:

Their posts continued with more details about little Kaavia:

Ever since they announced this amazing news, Union and Wade have been open about sharing even more photos of the new addition to the family. They've also been quite open about how they're handling being parents to a newborn. In her Instagram Story on Nov. 11 (via Us Weekly), the actor reportedly gave a very honest update to her fans, saying, "So perhaps I haven’t showered or brushed my teeth or slept. But I’m in heaven. I stink but I’m happy."

Based on all of their recent posts and updates, it really does seem as though Union and Wade are truly enjoying spending every moment they can with their daughter, Kaavia James Union Wade.

More like this
RHOP’s Robyn Dixon Explained Why Juan Paid For Another Woman's Hotel Room
By Brad Witter
How Andrea Riseborough Got Nominated — & Almost Disqualified For An Oscar
By Jake Viswanath
Twitter Is Shook As Tom Brady Holds Back Tears Announcing His 2nd Retirement
By Marina Watts
Who Is "Daddy" Pedro Pascal Dating? People Are Thirsting Over The 'Last Of Us' Star
By Alyssa Lapid
Get Even More From Bustle — Sign Up For The Newsletter
From hair trends to relationship advice, our daily newsletter has everything you need to sound like a person who’s on TikTok, even if you aren’t.