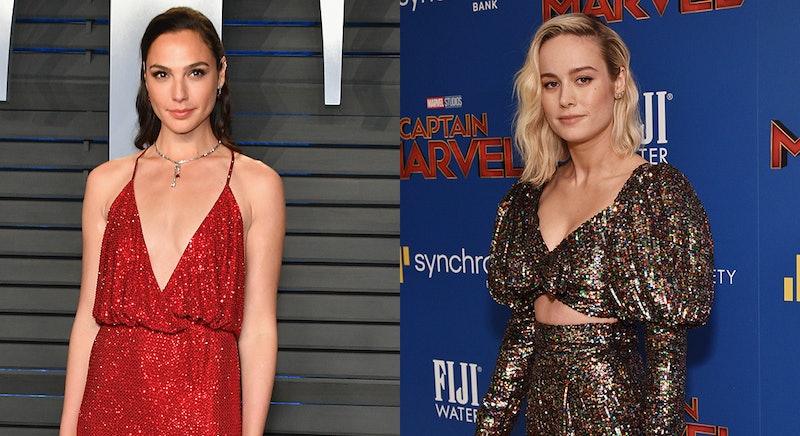 The highly-anticipated debut of Captain Marvel arrived in theaters this past weekend and, sadly, it didn't take long for people to begin pitting the character and movie against Wonder Woman — the most recent female-led superhero film prior to Captain Marvel's arrival. As the chatter made its rounds on the internet, Wonder Woman star Gal Gadot shared a sweet message for Brie Larson, completely changing the narrative for those who felt that two women would not be able to exist the same space.

On Tuesday, March 12, Gadot took to Instagram Stories to post an illustration by Maxy Artwork which showcased she and Larson's characters arm-in-arm, according to Buzzfeed. Tagging Larson in the photo, the outlet notes that Gadot wrote, "I'm so happy for you sister! Congrats."

Her message, no doubt, serves as a reminder to people that they should not compare and contrast, but instead, feel empowered by the fact that another female-led superhero film has found its way to the big screen. That said, it's certainly refreshing to see Gadot show solidarity between she and Larson since they're now both two of the biggest superheroes in the film industry. Gadot is currently gearing up to reprise her role in the forthcoming Wonder Woman 2 film, while Larson's Captain Marvel completely dominated box offices during its opening weekend. According to The Wrap, Captain Marvel saved a sluggish 2019 box office with a "$153 million opening from 4,310 screens," giving it the third place ranking in best March opening weekends of all time.

Gadot's feelings of support for Captain Marvel appear to have been mirrored throughout the entire DC universe. Prior to the film's release, Wonder Woman director Patty Jenkins shared her well-wishes via social media. Sharing an illustration of Wonder Woman and Captain Marvel by John Yandall, Jenkins wrote, "Congratulations team Captain Marvel! Can't wait to see it and our whole WW crew wish you a great weekend."

It all feels so empowering as the movement to support and encourage women continues to push forward. Both Gadot and Larson have played tremendous roles in making sure the love for women in Hollywood, and beyond, continues to go around.

"Happy International Women's Day to every type of woman — however you choose to define yourself, and all the ways you choose not to," she wrote. "Let that star shine! I see you!"

Gadot, also a feminist champion, has remained dedicated to using her platform to promote the empowerment of women. In August 2017, she told Rolling Stone:

"People always ask me, 'Are you a feminist?' And I find the question surprising, because I think, 'Yes, of course. Every woman, every man, everyone should be a feminist. Because whoever is not a feminist is a sexist.'"

Both on and off screen, Gal Gadot and Brie Larson continue to fight for the rights of women everywhere, proving that superheroes don't always wear capes.