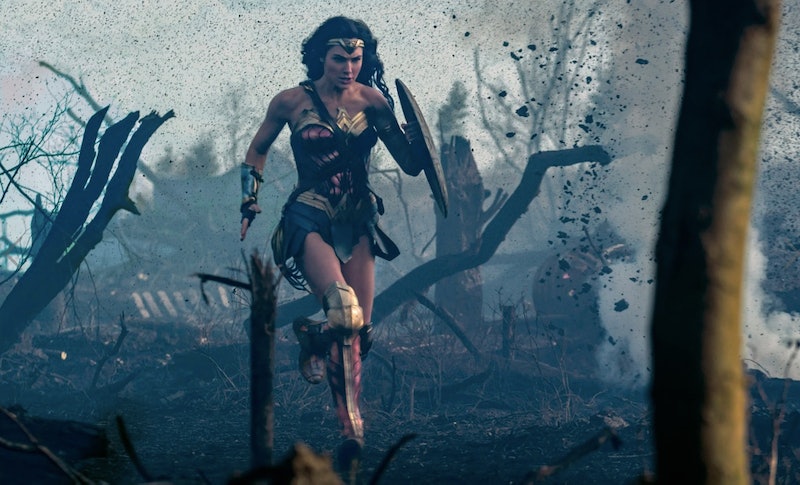 That's a wrap! On Dec. 23, Gal Gadot posted a heartfelt Instagram post celebrating the end of filming of Wonder Woman 2, even though it won't come out until June 5, 2020. In her Instagram post about wrapping on Wonder Woman 1984, Gadot not only gushed about shooting the upcoming DC film, but she also revealed some new information about the follow-up to 2017's superhero smash hit. "We shot in 4 very different locations in 3 countries," the actor who plays Wonder Woman wrote. That means that the 1980s-set Wonder Woman 2 could span across the globe in even bigger ways than the first movie.

Of those four different locations, only one is known for sure as of now, as director Patty Jenkins previously told Entertainment Weekly that she planned to set the new movie in the U.S. "She’s Wonder Woman. She’s got to come to America. It’s time," Jenkins said.

Spoiler alert. Last summer, Wonder Woman 2 made headlines when fans spotted the movie's stars filming the sequel around the streets of Washington D.C. Shockingly, those stars included Chris Pine's Wonder Woman character, Steve Trevor, who had died at the end of the first Wonder Woman. Fans' photos also caught shots of Kristen Wiig, who will play the villain called Cheetah in 1984.

The two other countries that might appear in Wonder Woman 1984 are yet to be revealed, but the film's IMDb lists filming locations in Spain and England, and a few blogs like Cosmic Book News state that Wonder Woman 2 filmed in Spain in September. Since nobody involved in the film has confirmed that 1984 filmed in Spain, though, those rumors remain as hearsay.

Regardless of where the filming of the new Wonder Woman took place, Gadot's post to mark its wrap reveals that the production involved a remarkable number of people. "I'm so soooo proud of the almost 1000 crew members who came to set every day, giving everything they have into our movie," Gadot said. With such a gigantic crew, it's no wonder that Gadot felt like celebrating the film's conclusion. The superhero star wrote, "As much as the first time shooting Wonder Woman was amazing, this time was even more unique and special," before continuing to gush about Jenkins' work as the director of the film.

Now, fans just have to wait about a year and-a-half before they finally get to see the return of Gadot as Diana Prince, Godkiller of the Amazon — okay that's actually a really long time. But this long wait time probably means you can expect mind-blowing special effects that Hollywood's so keen on creating these days. And you'll have extra time to come up with theories as to how Steve Trevor ends up in in the 1984, looking exactly as he did in the late 1910s-set first Wonder Woman, too.

After 2017's Wonder Woman brought audiences to the island Themyscira, Paris, London, and Belgium, it seems like the sequel has even more globe-trotting in store. Based on Gadot's Instagram post, it sounds like Wonder Woman 2 could even be bigger and better than the first DCEU breakout film, so it will definitely be worth the wait.