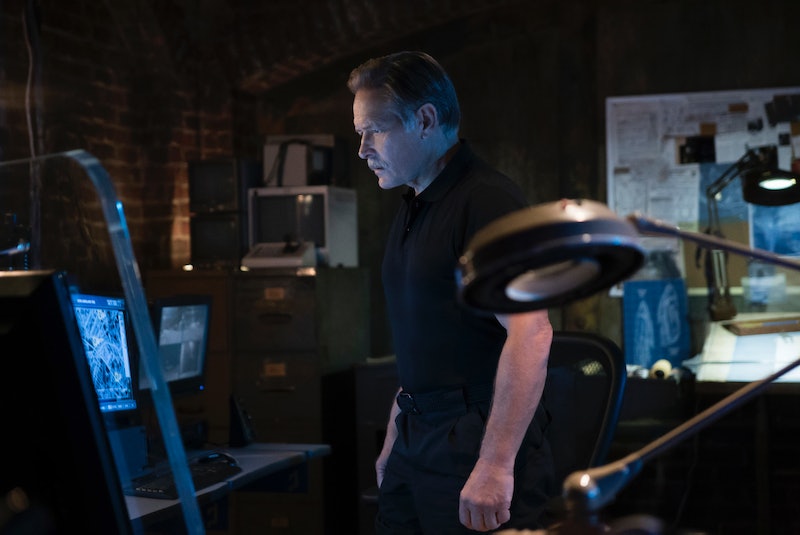 Spoilers ahead for Black Lightning Season 2, Episode 5. The first family of Freeland is shaken when they discover that after a horrific accident involving a heavily weaponized enemy this week, Gambi is likely dead. Now, they have to process the emotional weight of losing a trusted family friend and vital resource on top of their fights against street violence and the A.S.A.

In the Nov. 13 episode, Gambi is driving home when two SUVs pull up beside him at a red light. One man starts firing a machine gun, but Gambi’s bullet proof windows shield him from sudden death. As a car chase ensues, Gambi's technologically advanced truck reminds him of his dwindling structural integrity, which causes him to intentionally make a sharp right turn to avoid more gunfire.

Sadly, the vehicle goes out of control, flips on its side, and bursts into flames. Several witnesses watch in disbelief as the unidentified men drive off. It remains to be seen who these men are, but they are probably A.S.A. agents or Tobias Whale, who has been tying up loose ends from his criminal past lately.

Detective Henderson knows Gambi is Jefferson's father figure, so he breaks the news to him and Anissa in person. Henderson asks if Gambi is “one of them” (a metahuman) because he can’t imagine why someone with military weapons would attack a local tailor. Of course, Jefferson doesn’t inform him about Gambi’s former life as an A.S.A. agent nor his connection to Black Lightning and Thunder because that would further complicate things. Henderson tells them to let him handle the investigation, offering his sympathies as he leaves.

Anissa is prepared for revenge, but Jefferson says they need to sit tight for now because Gambi always has a back up plan. He refuses to take action until he sees Gambi's body, which is an understandable reaction because he's in shock and not ready to accept the truth. Anissa leaves so she can break the news to Jennifer, who is devastated by the loss.

The scene between Jennifer and Anissa really emphasized their love for Uncle Gambi, who has played an instrumental part in their upbringing long before they knew about his past or Black Lightning. He protected them when A.S.A. agents tried to kill their family and was a guiding force for Anissa as she transitioned towards becoming a superhero. He's basically the Alfred to Bruce Wayne's Batman, so it is a major loss.

Jefferson begins to act out of character as he starts to process the murder. Lynn tries to cheer him up by giving him Gambi’s pocket watch, but he lashes out at her and gets into a drunken fight at a local bar. Thankfully, Henderson shows up to de-escalate the situation and allows Jefferson to vent about the pressures of being a pillar in the community.

Jefferson eventually goes to Gambi’s shop and opens the pocket watch, which is revealed to be a present from Jefferson with a childhood picture of the pair. Anissa watches silently as he breaks down in tears before embracing him with a hug. She tells her father that Gambi said raising him and guiding him toward becoming Black Lightning was the best decision he has ever made.

Gambi’s death is going to be a major driving force for Thunder and Black Lightning as they seek justice. A hero is only as good as their support system and he played a key role in providing them the technological infrastructure and wisdom to stay ahead of the game. And, it might be the final push that Jennifer needs to embrace her destiny as a hero.

But, there’s always the slim possibility that Gambi could be alive. The attack on his truck was very similar to Nick Fury's in Captain America: The Winter Soldier where Nick was able to escape through a Mouse Hole to avoid death. Perhaps Gambi has similar technology in the DC universe that somehow helped him get out of this sticky situation. He may have wrecked the truck at that specific spot on purpose to get to a secret hiding place as a part of an established escape plan. It would be nearly impossible for him not to be detected by witnesses, but anything can happen on a superhero show.

There is also the slim chance that Gambi could be a meta-human himself, which would be a departure from his comic book roots. Per Comic Vine, Gambi was a reformed mob hitman turned tailor who killed Jefferson’s father Alvin Pierce before becoming a human ally to Black Lightning. He later sacrificed himself to save Black Lightning after they were kidnapped by Tobias Whale and Syonide, who recently died on the TV show.

Most series take liberties with their comic material, so a meta-human Gambi is possible. And, according to IMBD, actor James Remar is expected to appear in future episodes this season. But, these glimpses of Gambi may be in the form of videos to Jefferson or in flashback material. Right now, all signs are pointing to him being a casualty of this Green Light war.

Is Gambi really dead or a master of faking his death? How will Black Lightning and Thunder find the truth about his hitmen? And, is Tobias somehow involved in this murder? All will be revealed as Black Lightning Season 2 continues to unfold.