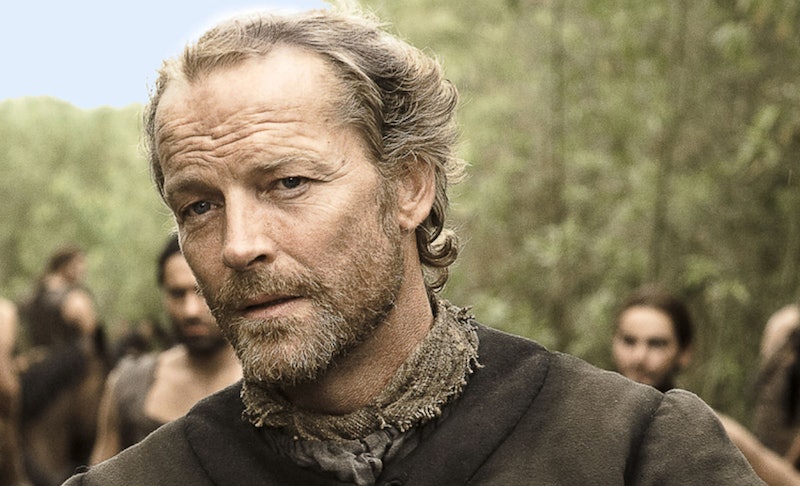 The best thing about one year ending is a fresh start, days getting longer, and of course — a new season of Game Of Thrones. Yes, that pedlar of incest and violence is back baby. Well not quite yet, but the first half of the final ever season (tears) kicks off in April. I am not sure if any show has ever garnered quite so many fan theories, from the possible to the outrageous — with all of them actually being entirely plausible. So understandably, according to one star, the Game Of Thrones producers are "absolutely paranoid" about spoilers. Well producer babes, I completely feel you.

Not since every time a new Harry Potter book came out, has the storyline of a piece of work been so intensely guarded. And y'all you can understand why. I actually shudder to think how much money has been ploughed into this. How many pizzas have been ordered for writers. How many runners have cried. How many production assistants have had near nervous breakdowns while sorting out taxis. Shudder.

Iain Glen, who plays Ser Jorah Mormont, spoke to Variety, explaining how intense the secrecy is on the show, when he spoke with Nihal Arthanayake on BBC Radio 5 Live.

"They’re absolutely paranoid now about anyone finding out anything about the series and spoiling it".

Giddiup Ser Jorah! Please, pray tell more. Y'all they weren't even allowed have actual scripts. But the future is now, so they had iPads.

"We weren’t allowed a written word on a page. Everything was accessed through iPads with different security you had to get through to access it, which caused a problem for the actors, I have to say. But we found a way, either on phones or with iPads…for it to be available on set".

Hmmm I wonder how many of them got distracted by Instagram when they were supposed to be running lines? Well, I am sure they had production staff paid specifically to give them a little slap on the hand when that happened. OK just kidding, but the security must have been so insanely tight on the show.

This comes after actual months of speculation. I mean let's be real, this is the kind of show where people get completely hooked, and with this one ever time. One particular actor from the show, Nikolaj Coster-Waldau, who plays Jaime Lannister spoke to the Huffington Post about spoilers. He hit the nail on the head when he said that keeping your mouth shut is the easiest choice.

"There are so many theories out there that you comment on once and then it takes on its own life".

And what about other shows that have been accidentally spoiled? Well Rebecca Mader, who played Zelena, accidentally spoiled the series finale of Once Upon a Time ahead of the show airing. And guys, it was completely by mistake according to her. Like she hadn't even read the script. Speaking to Entertainment Weekly, she said a question she answered at a convention, on what ending she would like to see, revealed the ending the writer had actually settled on without her even realising it. "Then I read the script, I’m like, ‘They’re going to think I knew this,'" she said afterwards.

Spoilers from your favourite show are like meeting your hero, or learning the secret to an illusion. You will almost definitely be left disappointed and take away any real enjoyment or magic from the experience. So don't open that box Pandy, the end of Game Of Thrones is in there.