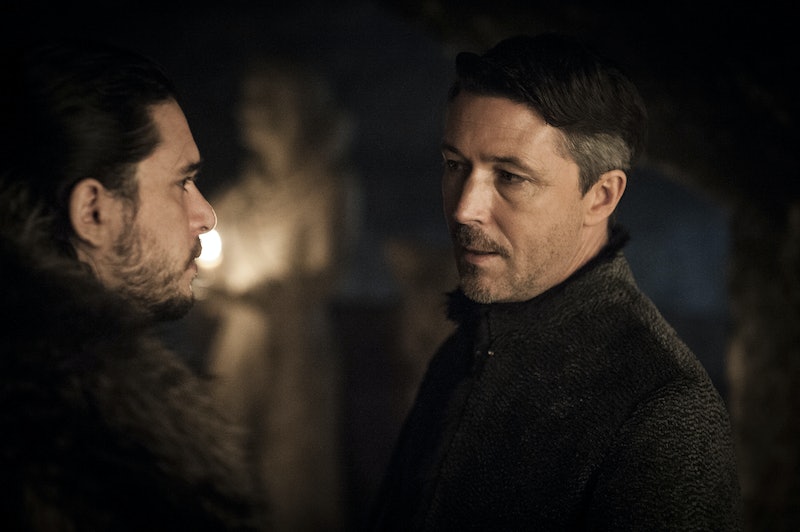 After seven seasons of war, loss, and pain, it's impossible not to wish for good things to happen to Jon Snow, Daenerys, Sansa, and the rest of the people left standing in Westeros. But in a new interview with Entertainment Tonight, Aidan Gillen shared that Game of Thrones shouldn't have a happy ending, no matter how much he and the fans may want one. He's right, of course, it wouldn't be true to the show's spirit for all of the storylines to end happily. The man who played Littlefinger knows better than most that Westeros can be a cruel place, and there's no guarantees that all will turn out well by the end of Season 8.

Since Littlefinger died at the end of Season 7, Gillen told ET that he doesn't have any insider information about the final season. Unlike the castmembers who made it to Season 8, he doesn't know how the story will end, but based on his time on the show, he's got a good idea of how it should end. "I always thought it'd be nice for it to have a happy ending," Gillen said during his interview. "But I can't imagine that would be appropriate."

Game of Thrones has never shied away from the brutality of war or life in a medieval-style fantasy world. The sheer amount of characters who have died over the course of the series is proof of that, and with a war against the Night King coming to Westeros, it would be weird if Season 8 wasn't a bit bleak. As for the show's ending, the best fans can hope for is something bittersweet.

Or, as Gillen hopes, "something unexpected." The show has gone to great lengths to set up an ending where either Daenerys or Jon ascends to the throne in the aftermath of the war with the Night King. But is that too expected to work? For at least one of the actors, it's more important that the show's final season tells a story that those involved in are proud of than one that satisfies every member of the audience.

In a 2017 interview with The Hollywood Reporter, Isaac Hempstead Wright said:

"As long as we can reconcile with ourselves that we're happy with how it ends, it won't matter what anyone else thinks, really. As long as we feel we've done the story justice, and have done justice to George's universe and David and Dan's vision, then that's really all we can hope for. It won't go the way some people want. It will be too happy for some people, or too sad, or too whatever. That's the nature of an ending."

Hempstead Wright's wise words are good to keep in mind as the final season premiere draws closer. There's no guarantee that fans will get a happy ending, or even one they'll like, but it does sound like the show will end on its own terms. And that's an achievement in and of itself.

For now, all fans can do is wait patiently, like Gillen, to see how this amazing journey through Westeros comes to a close.