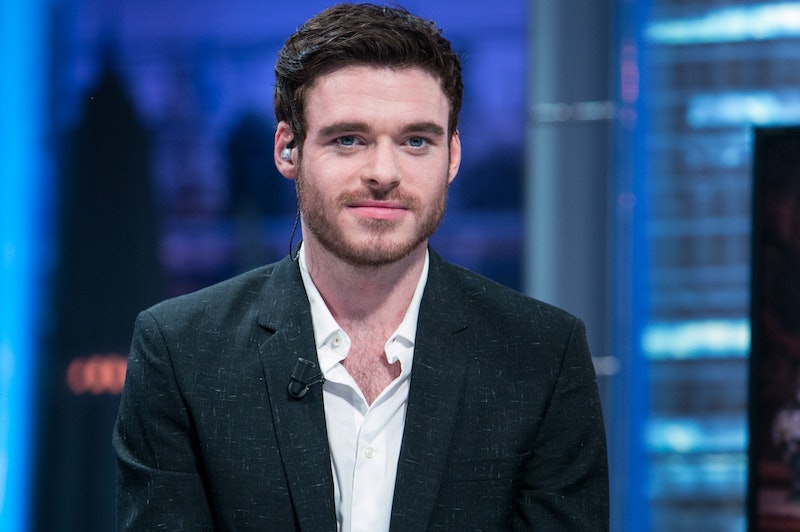 With the final season of Game of Thrones approaching, it's understandable that some fans of the show are, well, utterly freaking out. There's nothing really that anyone can say to help make the HBO show's impending finale any less definitive, but at least fans can find comfort in knowing that the actors from GoT could each return to your TV screens later on. In fact, it's already happening, because the actor who played Robb Stark, Richard Madden, has a new show coming to Netflix. It turns out that there is life after Westeros, even if you happen to die there. Deadline broke the news about Madden's new starring role on a show called Bodyguard on Tuesday morning, and it sounds like something fans won't want to miss when it hits Netflix on Oct. 24.

Bodyguard, like The Great British Bake Off, originally came out in the U.K. before Netflix picked up the BBC show, and — like GBBO — Madden's new show has done spectacularly with BBC One's viewers. As Deadline reports, the show premiered a few weeks ago to 10.4 million viewers, which makes it the best-performing launch of any new dramatic TV show across all UK channels over the past 10 years. Those are pretty incredible stats, especially considering that BBC One premiered Benedict Cumberbatch's Sherlock to 7.5 million viewers in 2010, according to The Telegraph.

Don't worry, no one's making audiences choose between Madden and Cumberbatch — that wouldn't be fair — because it's 2018, and everyone should have both. Thanks to Netflix, that'll soon be possible for U.S. viewers who couldn't watch the BBC One show, even on the station's website. But thanks to Netflix, fans should get ready to see Robb Stark in a totally different role, well, sort of.

While the actor who played the "King in the North" on GoT plays a much more modern character on Bodyguard, his character David Budd (Madden) still has a history with war. While Robb lost his life in the infamous Red Wedding episode, David Budd made it out of a war as a hero, but he struggles to transition into his new role as a glorified bodyguard.

The BBC show tells the fictional story of David's tumultuous conversion from war hero to the Specialist Protection Officer for the Royalty and Specialist Branch (RasP) of London’s Metropolitan Police Service. Not only does David's new position force him to change his approach to combat and defense, but it also forces him to get close with the Home Secretary he's assigned to protect — and the two don't necessarily gel. The Home Secretary is named Julia Montague (Keeley Hawes), and her ambition and political beliefs force David to test his dedication to the job.

Bodyguard's exciting clash between ideologies paired with its action sequences and mysteries that arise during tense political times have helped the show continue to grow in popularity among the U.K. Fans of the hit series frequently take to Twitter to discuss their excitement over cliffhangers and mysteries. So, it's sure to make for some great Netflix marathon watching.

Just make sure that you don't check the Bodyguard conversation happening online before the show hits Netflix, because you don't want to ruin any spoilers. Long live the King in the North.

More like this
Here’s Everything Coming To & Leaving Netflix In August
By Jake Viswanath
Does 'Locke & Key’s Ending Mean There Could Be A Season 4?
By Sophia Moore
Netflix Just Rebooted A Classic ‘90s High School Drama
By Maxine Harrison
'The Sandman’s Ending Is A Departure From Neil Gaiman’s Comic Book Series
By Kadin Burnett
Get Even More From Bustle — Sign Up For The Newsletter