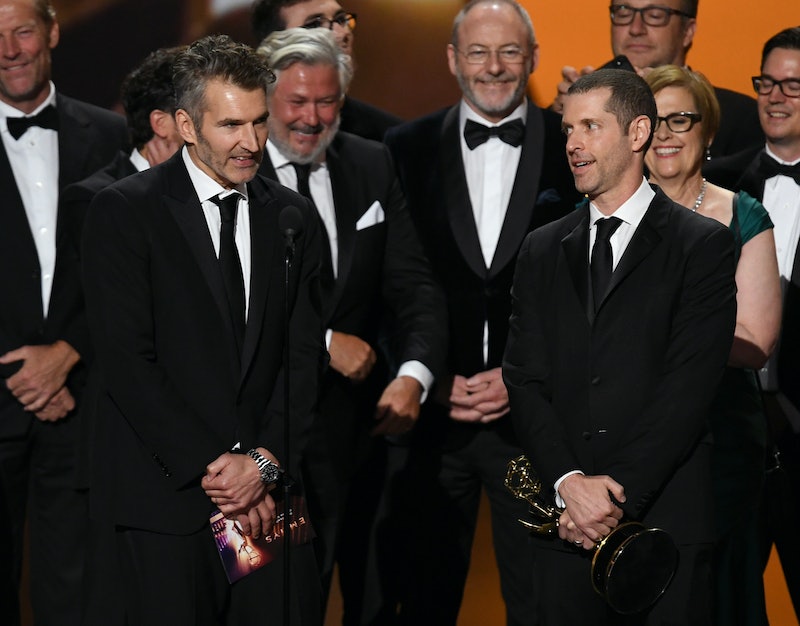 It's been said time and again since May, but it's worth repeating: the last season of Game of Thrones didn't satisfy a lot of fans, especially when it came to who ended up on the Iron Throne. But at the 2019 Emmys on Sunday, Sept. 22, the Game of Thrones creators defended making Bran King of Westeros, and revealed that it was their plan all along.

On Sunday night, after the HBO show won Outstanding Drama Series at the 71st annual Emmy Awards, co-creators and showrunners David Benioff and D.B. Weiss were asked in the press room how much of the ending developed over time and what was always pre-destined from the beginning. "It honestly just depends on specifics," Benioff said. "Like it was always going to be Bran as the king at the end."

Isaac Hempstead Wright stated something similar to this after the final episode premiered back in May. He told HBO's Making of Game of Thrones blog that his character's ending came all the way from the top. "[Creators] David [Benioff] and Dan [Weiss] told me there were two things [author] George R.R. Martin had planned for Bran, and that was the Hodor revelation, and that he would be king," he said. "So that’s pretty special to be directly involved in something that is part of George’s vision. It was a really nice way to wrap it up."

Later in the press room at the Emmys, as reported by Variety, D&D, as they're affectionately known, also answered to the major backlash the final season received. “It’s not really up for us to decide what people feel about it. We hope that they watch it and like it in the future. There’s no way to tell,” Weiss said. “The landscape of television changes so quickly; it’s changing right now as we’re standing here. It’s so gratifying to have reached this many people. We hope the people who are a little bit too young will grow up to watch it as well.” This is the first time the showrunners have really talked about the finale and controversy surrounding the season, which culminated in a fan petition demanding HBO remake Season 8 of GoT "with competent writers."

As for what the Mother of Dragons thought about all the fiery feedback the show go in its final moments, she took a much more positive outlook when asked about it at the Emmys. “You know what? It was profoundly flattering is what it was because when someone cares that much that they’re ready to make such a noise about how they believe the characters should’ve been finished and how the story should’ve gone," Emilia Clarke said of the fans' passionate responses to the finale in an interview with Variety on the Emmy Red Carpet. "That’s just enormously flattering. That just shows how much everybody loved it.”

Of course, it was hard for her to read Daenerys' tragic ending at first. In an interview with Entertainment Weekly in May, Clarke admitted that she had to take a walk to clear her head after reading the script, asking everyone she knew for validation on Dany's previous goodness. But, in regards to Daenerys' death, Clarke felt "very taken care of as a character in that sense," because that's the ending she had suspected anyway. And, of course, Clark stood by her Khaleesi 100 percent in the end. "I stand by Daenerys. I stand by her! I can’t not," she told EW.

Whether you're Emilia "Glass Half Full" Clarke or a more pessimistic, Bronn type, there's no denying that Game of Thrones definitely went out with a bang at their last Emmys.