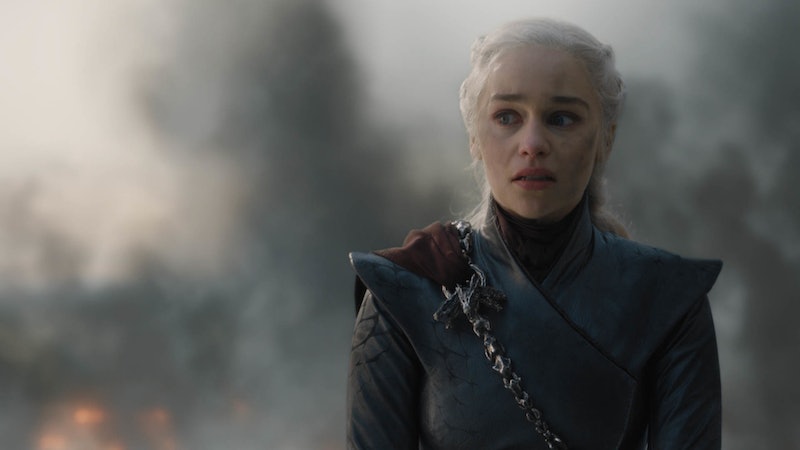 The final episode of Game of Thrones hasn't even aired yet, but some fans are already hoping to get a brand new take on the show's final season. Game of Thrones fans are petitioning HBO to remake Season 8 "with competent writers," and as of publication, there are already over 385,000 people who have thrown their support behind it.

Spoilers for Game of Thrones Season 8 ahead. Backlash to the fantasy saga began swirling shortly after the penultimate episode, "The Bells," aired on May 12, which showcased Daenerys (Emilia Clarke) following in the footsteps of her father, the "Mad King" Aerys, and torching all of King's Landing, murdering plenty of women and children in the process. While the debate about whether or not Dany's turn towards tyranny made any sense, considering the way the show has portrayed her as the "breaker of chains" over the course of its run, rages on, most fans agree that her sudden "madness" was poorly written and terribly foreshadowed.

Dany's turn — plus Jaime's (Nikolaj Coster-Waldau) decision to leave Winterfell and return to King's Landing in order to die with Cersei (Lena Headey) — seems to have inspired Thrones fan Dylan D. to request that HBO remake the final season of the show, without creators David Benioff and D.B. Weiss in charge. "Remake Game of Thrones Season 8 with competent writers," the fan titled the Change.org petition, which quickly garnered a great deal of support and publicity online.

"David Benioff and D.B. Weiss have proven themselves to be woefully incompetent writers when they have no source material (i.e. the books) to fall back on," Dylan D. wrote on their petition. Beginning in Season 6, the events of Game of Thrones had outpaced the storylines from George R. R. Martin's books, though both Benioff and Weiss maintained that they were working towards the author's intended ending for the saga on the show. "If you know the ending, then you can lay the groundwork for it. And so we want to know how everything ends," Benioff told Vanity Fair in 2014. "We want to be able to set things up. So we just sat down with him and literally went through every character."

"This series deserves a final season that makes sense," the petition's mission statement reads. "Subvert my expectations and make it happen, HBO!" Considering Season 8 of Game of Thrones cost HBO more than $90 million to make, according to the Daily Beast, it seems unlikely that the network would be willing to drop that kind of money all over again, to appease a particularly vocal contingent of the show's audience.

Though the show's shortened final season — which will run 6 episodes instead of the 10 that made up the first six installments of Thrones — means that there is less room for the writers to slowly build to the eventual finale, the decision to condense Seasons 7 and 8 was made by Benioff and Weiss. And despite knowing where all of the characters were intended to end up, even Martin wasn't able to help them lay all of the groundwork for those developments, telling VF in 2014, "I can give them the broad strokes of what I intend to write, but the details aren’t there yet."

Even if the details were all there for Benioff and Weiss to work with while writing the final Thrones season, there's no guarantee that fans would still be happy with the way the show wrapped up. After all, it's not unheard of for beloved TV shows to disappoint their viewers with their final episodes — just look at the reaction to the Dexter or How I Met Your Mother series finales.

In fact, star Maisie Williams warned Game of Thrones fans back in January that the final season of the show would be divisive among fans. "I don't think anyone is going to be satisfied [when it ends]," she told Sky News at the time. "I don't think anyone wants it to end but I'm really proud of this final season." Her onscreen brother, Isaac Hempstead-Wright, echoed those sentiments to the Hollywood Reporter in December 2017, saying, "It won't go the way some people want. It will be too happy for some people, or too sad, or too whatever. That's the nature of an ending."

Clearly, the creative team behind Game of Thrones is determined to have the show go out on its own terms, no matter how fans feel about it. And while it's likely that the finale will disappoint many viewers when it airs on May 19, at least fans can take comfort in the fact that Martin still has two books left in the saga, in order to continue the story in his own way.

More like this
'The Sandman’s Ending Is A Departure From Neil Gaiman’s Comic Book Series
By Kadin Burnett
The 'PLL: Original Sin' Creators Say A’s Identity Will Be “Very Clear” By The Season Finale
By Alyssa Lapid
Gabby & Rachel Reveal How That 'Bachelorette' Rose Ceremony Twist Happened
By Grace Wehniainen
Everything To Know About 'RHOC' Season 17
By Brad Witter and Sophia Moore
Get Even More From Bustle — Sign Up For The Newsletter