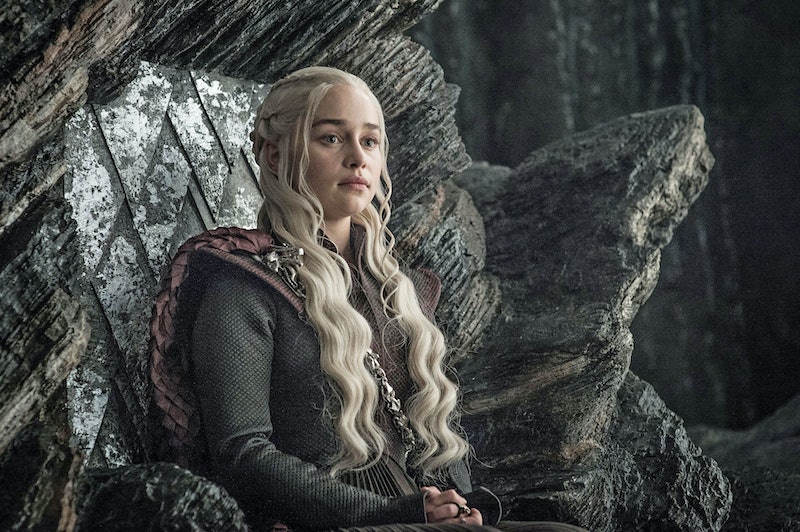 While it is true the great mystery of Jon Snow's parentage has been cleared up, there are still a lot of unanswered questions swirling around in the Game of Thrones universe. For starters, where are the remaining direwolves, Nymeria and Ghost? Which Lannister brother will be responsible for Cersei's prophesied death? Which king or queen will end up on the iron throne when it's all over? And, perhaps most importantly of all, when will the last two books in the A Song of Ice and Fire series be published? It might be while until we get to the bottom of any of those mysteries, but thanks to a recent interview with author and creator George R.R. Martin, we finally know the truth about the political message of Game of Thrones.

During a cover shoot for the upcoming Oct. 21 Greats issue of T Magazine, the famous A Game of Thrones author answered a handful of questions from New York Times employees. "Fantasy's reigning king" opened up about what modern political leaders could learn from Westeros, how it feels to be the creator of such a wildly popular series, which real-life historical figures and events inspired his writing, and more.

When Times columnist Farhad Manjoo asked Martin about his show's connection to climate change, Martin confirmed that "in a very broad sense — there’s a certain parallel there."

"And the people in Westeros are fighting their individual battles over power and status and wealth. And those are so distracting them that they’re ignoring the threat of “winter is coming,” which has the potential to destroy all of them and to destroy their world. And there is a great parallel there to, I think, what I see this planet doing here, where we’re fighting our own battles. We’re fighting over issues, important issues, mind you — foreign policy, domestic policy, civil rights, social responsibility, social justice. All of these things are important. But while we’re tearing ourselves apart over this and expending so much energy, there exists this threat of climate change, which, to my mind, is conclusively proved by most of the data and 99.9 percent of the scientific community. And it really has the potential to destroy our world. And we’re ignoring that while we worry about the next election and issues that people are concerned about, like jobs. Jobs are a very important issue, of course. All of these things are important issues. But none of them are important if, like, we’re dead and our cities are under the ocean. So really, climate change should be the number one priority for any politician who is capable of looking past the next election. But unfortunately, there are only a handful of those. We spend 10 times as much energy and thought and debate in the media discussing whether or not N.F.L. players should stand for the national anthem than this threat that’s going to destroy our world."

So, there you have it, straight from the creator's mouth: Game of Thrones can be seen as a metaphor for the dangers of global warming. As it turns out "Winter is coming" is more than just a catchy phrase. It is something of a political statement.

While Martin passed on the opportunity to name the real-world celebrities that were most like his characters, he did revealed the character he believed was most like Donald Trump: Joffrey. "They have the same level of emotional maturity," Martin explained. "And Joffrey likes to remind everyone that he’s king. And he thinks that gives him the ability to do anything. And we’re not an absolute monarchy, like Westeros is. We’re a constitutional republic. And yet, Trump doesn’t seem to know what that means. He thinks the presidency gives him the power to do anything."

I don't know about you, but thanks to these revelations, I will never be able to look at Game of Thrones or the A Song of Ice and Fire series the same ever again.

More like this
16 Novels That Paint A Realistic Portrait Of Abortion
By K.W. Colyard
At 14, Jenny Han Wrote Rom-Coms About Her Friends & Fan Mail To Leo DiCaprio
By Alyssa Lapid
Emilia Clarke Shares More Details About The New 'Game Of Thrones' Series
By Maxine Harrison
Twitter’s Reaction To HBO’s ‘Game Of Thrones’ Jon Snow Spinoff Idea Is Chaotic
By Stephanie Topacio Long
Get Even More From Bustle — Sign Up For The Newsletter