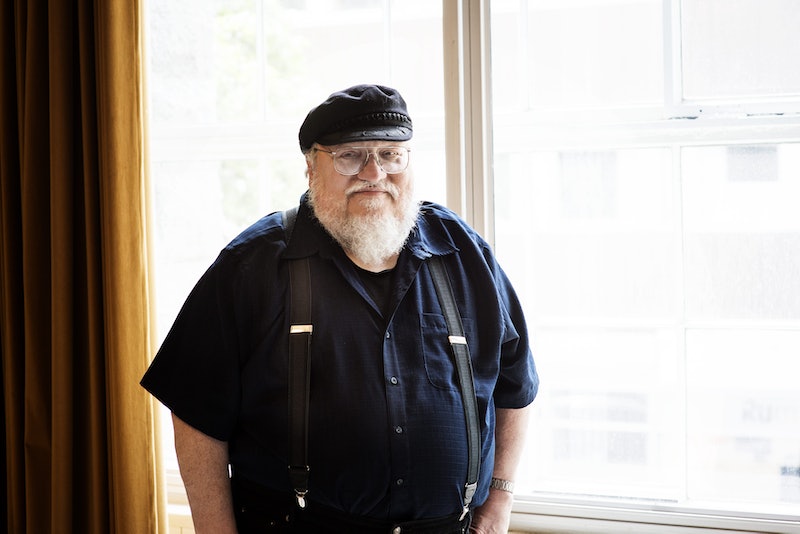 If you're a hardcore Game of Thrones fan, you've probably devoured the books that inspired the series several times. You knew that Jon Snow was going to be killed way before everyone else did. And you've been wondering what would happen next. Well, with author George R. R. Martin finally getting down to work on the final two books, details revealing what the next Game of Thrones book is about have finally emerged.

The 70-year-old began writing the A Song of Ice and Fire series in 1993, releasing the fifth book, A Dance with Dragons, in 2011. That was the same year the TV series premiered. Although Martin doesn't rule over the HBO show, he does have both writer and executive producer credits for every single episode that's been released so far.

And that, coupled with the news that several spin-off shows are being produced means the author has been pretty busy for the past few years. Because of this, the acclaimed TV series was forced to overtake his storyline, showing the revival of Snow, the reign of Daenerys, and the fearsome battle between humans and the White Walkers. Many may now be wondering what the point of reading the last two books is — but Martin has a couple of tricks up his sleeve.

Opening up to The Hollywood Reporter about the sixth book, The Winds of Winter, he explained that it is "very complex". Martin appears to have signified that his tale will go in a different direction to the current "Daenerys will win" scenario. Any fans of the books will already know that several characters killed off in the series are very much alive inside the pages.

A Dance with Dragons finished off with the murder of Jon Snow. So did the Season 5 finale. But as Digital Spy reports, Martin explained on his blog that The Winds of Winter will "be different [to the show] in some ways, but will parallel in others. At this point, there are probably a dozen characters who are dead on the show but alive in the books, so it would be impossible for the two to remain the same."

Gasp. Does that mean Snow may not come back to life after all? In Martin's world, anything goes. Several huge storylines have already been left out of the show. There's the tale of Lady Stoneheart; a revengeful woman who takes over Beric Dondarrion's crew and turns out to be a back-from-the-dead Catelyn Stark. Remember her?

And who can forget the fact that the books reveal Aegon Targaryen — the nephew of Daenerys who was thought to have been murdered as a baby — to have been alive and looked after by Varys all these years, ready to take his rightful place on the throne at any given moment? This is very confusing when you remember that, in the series, Snow is supposed to be Aegon. The TV series has also introduced some new characters like the terrifying Night King. It's not clear whether he will make an appearance in the forthcoming books.

Martin has teased the content of The Winds of Winter, releasing several chapters from the book. Keeping with the style of the previous books, each is written from the perspective of a different character. (Most of them can be read by downloading the A World of Ice and Fire app.) So what do they show?

Well, as Vulture reports, Arya Stark is still in training to be a Faceless Man, Theon Greyjoy is currently being held prisoner at Stannis Baratheon's camp (yes, he's still alive), and Tyrion Lannister is a slave but looks set to escape after a surprise appearance from the Ironborn. Oh, and Sansa Stark is posing as Alayne; the illegitimate child of Lord Petyr Baelish. If anyone deserves to meet the same gory fate as their TV counterpart, it's that man.

There's also a couple of chapters written from the viewpoint of Arianne Martell. She has been left out of the series and is the eldest daughter of Doran, the Prince of Dorne. Arianne takes on the role of the Sand Snakes and tries to overthrow her father but is caught. Her dad then explains that he is in fact not weak but has been hatching a plan to overthrow the Lannisters and put the Targaryen family back in power.

He sends his son Quentyn to team up with Daenerys but, unfortunately, he is killed by dragon fire. Then when news of the mysterious Aegon reaches them, Arianne and Doran must decide whether to back this new contender in the war. Ultimately, it seems like there may be a showdown between Daenerys and her long lost nephew.

It looks like The Winds of Winter won't be released until next year as Martin has been busy writing a book detailing the history of the Targaryens and their dragons. Fire and Blood, which will be out in November, is set 300 years before Game of Thrones, and is pretty hefty at 989 pages long. According to The Express, The Winds of Winter is set to be 1,500 pages long so at least fans will have plenty to keep themselves occupied with.

An ever more likely prospect is that the series and book will end in two completely different ways. While some aren't a fan of this wayward method, at least you'll get two tales for the price of one.