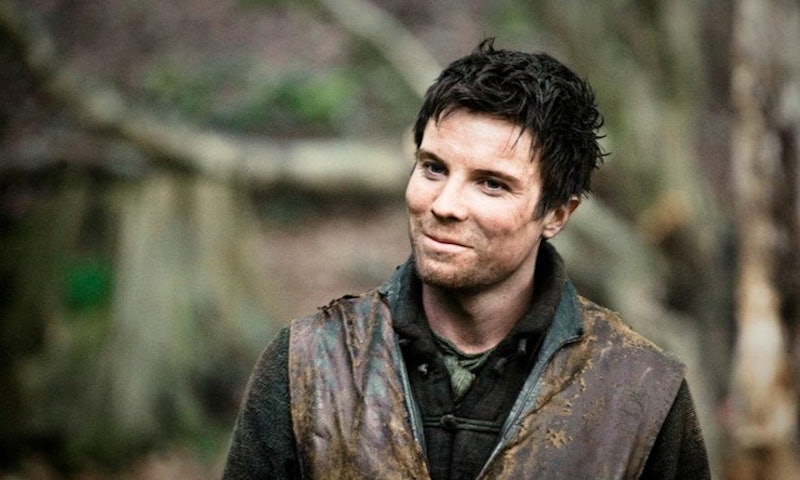 Game of Thrones brought back fan favorite Gendry after four seasons and the jokes that flowed in with him were well worth the wait. Fans have been waiting for Gendry to either return in all his glory, or just to show up dead somewhere for, like, 30 episodes now. Knowing now that he rowed himself to safety, and that we also got to see him wield Warhammer, is a tiny beam of light in the otherwise bleak world of Westeros at the moment. Not only that, but Davos actually made a rowing joke to Gendry, which meant that Game of Thrones officially broke the fourth wall.

You may remember the blacksmith's apprentice was assaulted with leeches by Melisandre way back in Season 3 after being sold to her by the Brotherhood Without Banners. He just so happens to be Robert Baratheon's last surviving bastard, so he has that sweet, sweet king's blood flowing through his veins. Luckily, Davos saved him before Melisandre had him sacrificed for Stannis, and Davos sent him away in a row boat in the dead of night. But that was the last fans saw of young Gendry until now. It was a popular joke for fans to make that Gendry was just rowing, rowing, rowing ever since Season 3 — and it appears GoT knew of that meme too.

When Gendry reappeared Sunday night, fans took to Twitter to share some top-notch memes about his rowing prowess, as well as Davos' acknowledgment of the joke when he said, "thought you might still be rowing."

People Were Here For Those Rowing Muscles

Some Fans Were Concerned That Gendry Was Just Immediately Rowing Again

Don't get back in a boat!

Some Were Comforted By A Continuously Rowing Gendry

Ah, everything is back to normal.

Some Fans Noticed He Had Changed A Bit

Some Were Impressed That He Had Improved His Rowing Time

Well, welcome back Gendry. Most of us fans are happy to see you and your jacked rowing arms back on Game of Thrones.