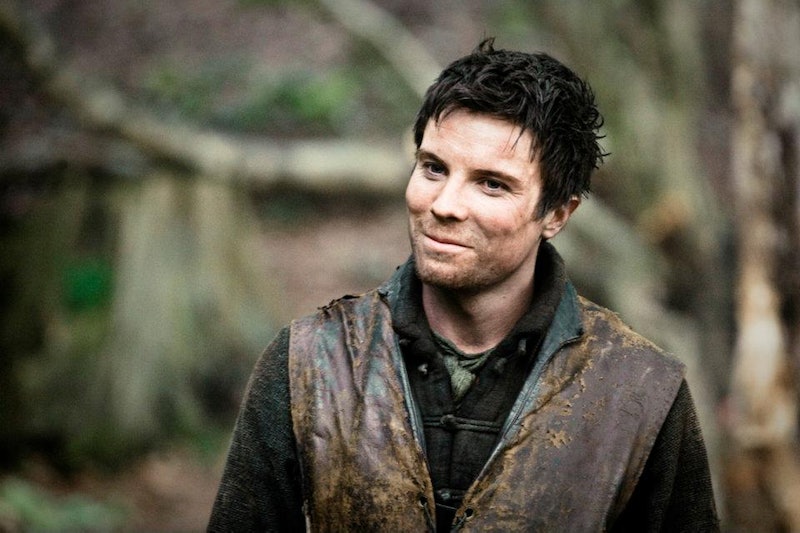 For years, Game of Thrones fans have wondered what happened to the one of the show’s most mysterious characters: Gendry, the bastard son of King Robert Baratheon who rowed away from Dragonstone on a boat in Season 3 and never came back. Well, (major spoiler alert), it seems like this season will officially welcome him back, and there’s never been a better time than now. He might be a bastard who disappeared for four years, but thanks to Westeros’ complicated political structure, it’s entirely possible that Gendry could claim Game of Thrones' Iron Throne for himself.

According to Winter Is Coming, Gendry was spotted on set for Season 7 filming (complete with a warhammer, Robert Baratheon’s weapon of choice), and will probably find himself at the mercy of Daenerys Targaryen in Dragonstone. As Bustle writer Jefferson Grubbs recently suggested, he could secure a place in King’s Landing by offering to marry Daenerys, uniting Targaryen supporters and Baratheon supporters together under a common family. It sounds like a pretty politically savvy move, but I honestly suspect that Daenerys won’t go for it; she still harbors a lot of resentment towards Robert Baratheon for usurping her father’s throne, and although she might take pity on his bastard son, she’d likely never produce his heirs, even if their children took the Targaryen name instead.

Instead, I think the smartest way for Gendy to attain power is to do what Stannis did: present himself as the true king based on his half-Baratheon heritage. At the time Stannis was treated as a usurper because his brother Robert technically had heirs in Joffrey, Tommen, and Myrcella. Now they’re all dead (as well as Stannis and his other brother, Renly), and only their mother Cersei remains. Odds are good that many in Westeros are ready to see her lose power; after all, she has no royal blood herself, and she’s super unpopular. Jaime said it best in the Game Of Thrones season premiere when he called her “queen of three kingdoms, at best.”

But who could Gendry ally himself with to secure his position? There isn’t that much left of the Baratheon army thanks to their defeat at the hands of Ramsay Snow in Season 5, meaning Gendry will need some other benefactor to assist him. Problem is, almost all the seven great houses are occupied with other allegiances. The Martells are officially Ride or Die for Daenerys; the Greyjoys seem pretty interested in winning Cersei’s favor, based on Euron’s recent visit; as far as anyone knows the Tully's lands are being controlled by the Lannisters after Edmure Tully’s capture at the Red Wedding; the Starks are clearly doing their own thing (but might need to ally with Daenerys to secure dragonglass), and Baelish is probably going to follow the Starks for as long as he can to remain close to Sansa.

That leaves just the Tyrells, who are currently the Lannister’s greatest enemies and have the strongest resources necessary to launch an attack against them. As Tomnen’s wife, Margarey Tyrell technically married into the Baratheons before she and her brother Loras were killed (although like Cersei, she was only a Queen Consort and never took her husband’s name), so it would stand to reason that her grandmother Olenna might use Gendry as a rallying point to challenge the Lannisters’ rule. Plus, it’s well known that Cersei deeply hated Robert, and her son Joffrey even tried to have all of his bastards killed. Olenna is just petty enough that she would take that into account and deliberately champion a Baratheon bastard just to mess with Cersei.

However, there’s still a giant elephant in the room: Gendry’s baseborn status, which precludes him from inheriting the land or titles of his father. In Westeros tradition, only a monarch can legitimize a bastard, which is why Stannis offered to make Jon Snow a Stark a few seasons ago; it was his sole bargaining chip in ensuring that Snow supported his claim. Aside from Cersei, only Daenerys could offer something similar to Gendry — but again, despite his presence at Dragonstone, I really don’t think that’s likely. Why legitimize someone who could snatch the Iron Throne out from under you?

But! Jon Snow’s current status as the King in the North complicates all of that. Even though he is no longer a member of the Night’s Watch and their “I shall take no lands” rule doesn’t apply to him anymore, he’s still a bastard and technically can’t be the lord of a Great House; instead, Winterfell should go to Sansa (or Bran, I guess, but he’s been presumed dead for a while) And yet, there is he ruling without any complaints, because desperate times and all that. So Gendry could argue the same should apply to him, and considering how many people in Westeros hate Cersei and fear the Targaryens, he might get away with it. Once you’re king, you can just legitimize yourself, right?

In any event, while the allies of the Targaryens and the Lannisters clash against one another for dominance and the Starks do their own thing up North, the Tyrells might just be able to sneak Gendry in there to grab the throne out from under everyone’s noses. You’ve got to admit, stranger and more shocking things have happened in Game Of Thrones.