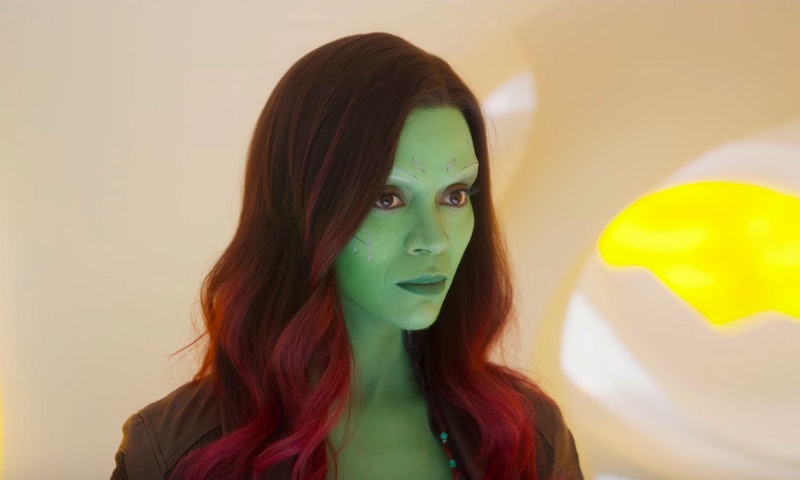 Major spoilers for Avengers: Infinity War ahead. Most Marvel Cinematic Universe fans are going into Infinity War expecting some major character deaths. But many of the theories surrounding who lives and dies in Infinity War revolve around major Avengers characters like Iron Man and Captain America. But what about the more supporting characters of Infinity War that are joining the Avengers team from other movies, like Spider-Man, Black Panther favorites Okoye and Shuri, or the Guardians of the Galaxy? They're in just as much trouble, and unfortunately, one beloved green-skinned Guardian meets a pretty gruesome fate. Yes, Gamora dies in Infinity War, killed by Thanos so that he can get a hold of the Soul Stone. But is Gamora really dead? The end of the movie suggests that her death just might not be final.

Infinity War highlights the tumultuous relationship Gamora has with her adoptive father, the evil titan Thanos. Thanos' main scheme is to fuse all of the known infinity stones, power, space, reality, time, mind, and soul, into one all-powerful infinity gauntlet and use it to wipe out half of the living beings in the galaxy with the snap of his fingers. We see Thanos' "half must die" theory in action during a flashback on Gamora's home planet. Her people are struggling and starving, so Thanos believes that by killing half he can save the other half, calling it mercy. But he takes a particular interest in a young Gamora, whose innocence seems to rekindle some kind of empathy inside of him. After all, Gamora and Nebula were both "adopted" (more like captured) and raised by Thanos, but have a seriously agitated relationship with the guy.

But Thanos figures out that Gamora knows where the Soul Stone is. In order to get her to reveal its location, Thanos tortures her sister, Nebula, and it becomes so horrific that Gamora gives in despite her previously rocky relationship with her sis. Gamora tells Thanos that the Soul Stone is being held on the planet Vormir, and the two visit together, where they approach a smokey, rocky cliff featuring two large towers. Upon their arrival, they're greeted by a floating, hooded figure who reveals himself to be Red Skull from Captain America: The First Avenger. How he got to Vormir and become the keeper of the Soul Stone remains a mystery, but as it turns out all of those rumors that Red Skull appearing in Infinity War were true.

Red Skull tells Thanos that in order to acquire the Soul Stone, he has to sacrifice something he loves. Gamora laughs, believing that Thanos loves nothing, therefore won't be able to summon the Soul Stone out of the misty depths. But as it turns out, there is something he still loves in the world: his favorite daughter, Gamora. He hurls her off he cliff to her death, and the Soul Stone manifests in his hand. It's one of the movie's more shocking deaths (and there are many), and considering Gamora was such a beloved fan favorite, especially for young girls, it makes her demise all the more tragic.

But is Gamora really dead? It's not totally clear. Peter Quill and Nebula mourn her death during their big confrontation with Thanos, but Thanos actually does get away with his plan to wipe out half of the population of the universe with the snap of his fingers once he has all of the infinity stones in his gauntlet. Infinity War ends with Thanos' success, and one by one, half of the world, and half of the characters of the movie, disintegrates into dust, making for the biggest movie kill-off in MCU history.

If the series were to end right then and there, the answer of whether or not Gamora is really dead for good would probably be a yes. But considering the fact that half of the characters die at the end of Infinity War, we have to assume that the fourth Avengers movie will probably figure out a way to undo it all. Fans are already speculating that Avengers 4 will involve some kind of time travel in order to undo the events of this movie, so it's safe to say that probably no one is really dead for good. So don't give up on Gamora, or any of the supposedly dead characters, just yet, since her death came as a result of Thanos' awful actions.