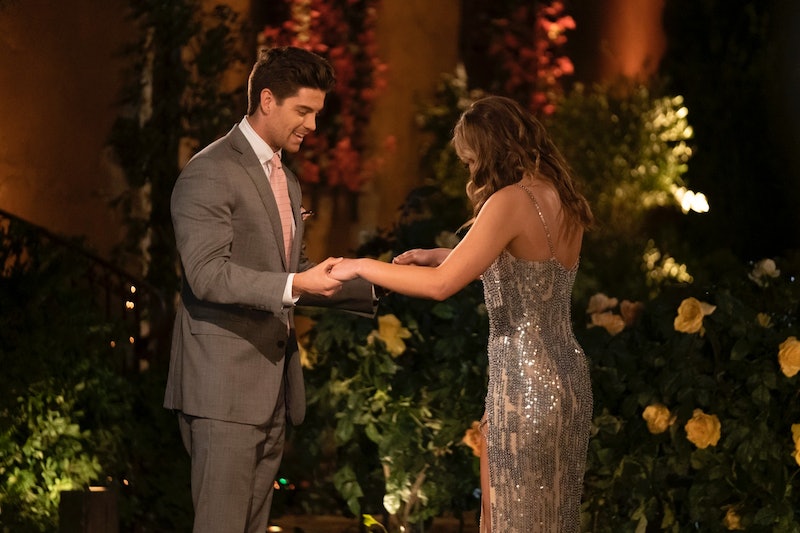 This season of The Bachelorette should be about Hannah's search for love, but over the past few episodes, it's become more about the drama created by one of her contestants: Luke P. He's quickly made a lot of enemies in the mansion, and on Monday night's episode, it got even worse. Garrett and Luke P.'s fight on The Bachelorette was just one more time that Luke was out of line.

After Hannah and Garrett went bungee jumping naked in Latvia, Luke totally lost it — he even insinuated that Hannah was cheating on him by sharing that experience with Garrett. And as if that wasn't enough, the first opportunity he had to stir up drama with Garrett about it, he took it.

In Luke's words, because Hannah is dating him, that somehow gave him the right to know what went on in her and Garrett's relationship. "If you don't want me to worry about what you and Hannah do, don't talk about it," Luke told him. Then, when the argument started going south, Luke immediately started begging Garrett not to bring up their conversation to Hannah... probably because he knew that she would not be happy about what he did.

Later, Hannah pulled Luke aside to talk to him about how upset she was about the way he'd approached her regarding her time with Garrett, and when he emerged from their very serious chat, he proceeded to start an argument with all of the other men.

They weren't taking any of what Luke was dishing out, though. Not only did Garrett fight back, but so did the other men — it's pretty obvious at this point that Luke has no chance of redeeming himself with the other men. And when it comes to Hannah, it may be too late for him to redeem himself there, too.

In fact, when Chris Harrison came in and let everyone know that there wouldn't be a rose ceremony that night because Hannah was already sure of what she wanted to do, they all immediately blamed Luke for it, and it's hard to argue with that. After the conversation that they had privately, it's clear that Hannah's frustrated with Luke's actions yet again — and it's probably safe to say that the same goes for Garrett.

Judging by previews for the rest of the season, it seems like the next Bachelorette episode will feature a massive screaming match between Garrett and Luke, just in case they hadn't caused enough tension already. If fans have learned one thing this season, it's that Luke has to have the last word, and maybe this time, he'll get it. It just might get him sent home in the process, too (which please, just let him bury his own grave).

In any event, it certainly seems like Luke's time on The Bachelorette will be up soon, despite the fact that Hannah gave him another rose this week. He's sticking around for now, but it's clear that Luke's Bachelorette days are numbered.