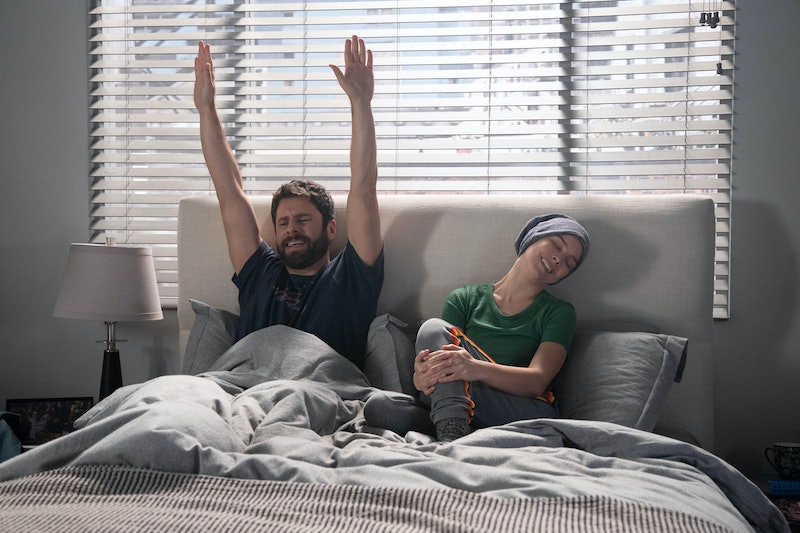 Spoilers ahead for the Season 2 midseason finale of A Million Little Things. Just when Gary's life was looking up, with his dog back home and Maggie by his side, everything came crashing down. This guy can't catch a break. In the midseason finale, Maggie found an engagement ring in a drawer and it sent her spiraling. She told Gary she still needed to learn who she was without cancer before she could fully commit. Gary said maybe he needed to learn who he was without her. Ouch. The odds that Maggie and Gary get back together on A Million Little Things aren't high right now.

There always needs to be a little drama heading into a hiatus to keep fans wanting more. This time Maggie and Gary's relationship had to take a hit for the cliffhanger. But this break up is actually something that everyone involved with the show has been hinting at all season. Fans just didn't want to believe it.

"I think we will see them struggle to figure out their dynamic, a dynamic that’s never existed before — a life without cancer," creator DJ Nash told Entertainment Weekly before the season started. His answer previewed the very conversation Maggie and Gary would have in the midseason finale.

James Roday, who plays Gary, dropped similar hints of dissolution to TV Line. "I think these two probably don’t know each other as well as they think they do," Roday said, adding that they probably also moved in too early. "The relationship was defined exclusively by keeping her alive ... And now they're having to reverse-engineer all of the steps in a relationship that got skipped."

Allison Miller, who plays Maggie, added to TV Line that post-cancer Maggie and Gary are "kind of like ... two different people now. And they are instantly in each other's space, just on top of each other in a brand new courtship. So that's a lot of pressure."

However, even though they have separated for the time being and they're trying to figure their own personal stuff out, there may be hope for reconciliation. At the end of the episode, Maggie asked Eric to help her move her stuff because she didn't want to tell any of Gary's friends what happened yet, "Just in case." Maggie seems to be holding onto some hope that this situation may quickly work itself out, especially now that she didn't get the job in England. And, yes, Gary did go home with someone from the bar, but we don't know if they'll actually sleep together. Even if they do, Gary slept with Ashley on his last break from Maggie, and they got over that.

Maybe, if as both Roday and Miller said, they just moved in too quickly, a little distance will help them. They can kind of reset the relationship from the beginning and build that foundation that is currently missing. After Colin the dog disappeared, Nash spoke to Bustle about all of Gary's trials and tribulations, and the showrunner hinted that all would be okay for Gary in the end. Not necessarily good with Maggie, but at least okay.

"All of our characters, including Gary, go through life's real challenges," Nash said. "We are following Gary and Maggie as they struggle to define their relationship post-cancer. But like with all of the characters, Gary will be reminded that life's challenges are doable with your friends at your side." He added, "Gary is definitely going through a lot this season, but with this group of friends, maybe he'll be better for it."

It just remains to be seen if Maggie will still be part of that group of friends too.