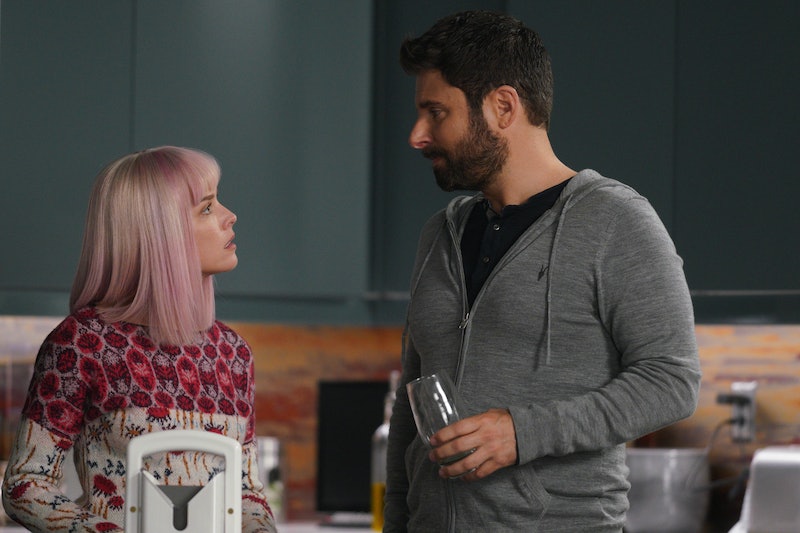 Spoilers ahead for A Million Little Things Season 2, Episode 4. Maggie may have been worried about who Eric was to her mother, but it turns out that Gary may need to worry about who Eric is to Maggie. In fact, Gary and Maggie could break up on A Million Little Things in part because of her newfound relationship with Eric. On the Oct. 17 episode, Maggie found out that Eric was not dating her mother but actually had her brother's heart. Chad had been able to donate his organs before his death, and Eric was alive because of it. At first Maggie was upset with her mom for lying about the way Chad died (she'd long believed he died instantly), but she couldn't blame Eric for anything. It turned out that he'd lost someone too — and Eric and Maggie bonded over their mutual grief and guilt.

Meanwhile, Maggie did not open up to Gary about her feelings at all. He was giving her space, but when he saw that she had been talking to Eric, Gary was obviously hurt. And it seemed like Maggie noticed that but also didn't do anything to try to reassure him. Things are not looking good for their relationship right now, and they're only going to get worse. The synopsis for the Oct. 24 episode says that "Gary feels disconnected from Maggie" and the episode photos show Maggie and Eric hanging out at his music shop, which does not bode well for Gary.

Then, for the Oct. 31 episode, the synopsis says, "Gary's growing tension with Maggie comes to a head as she accidentally lets Colin out while she's on the phone with Eric." Speaking as a dog owner, if my significant other let my dog escape, that relationship would be on thin AF ice. But while it's easy to blame Eric for the shift in Maggie and Gary's seemingly perfect relationship, that's not entirely fair. Show creator DJ Nash pointed out to Entertainment Weekly that the two were already forging new ground together and trying to figure out how they fit in a post-cancer situation.

"From the moment they met, their life was about cancer ... and what started as trying to convince Maggie to live and then fighting for her to have the ability to live is now a journey about what their life is going to be post-cancer," Nash said. "I think we will see them struggle to figure out their dynamic, a dynamic that’s never existed before — a life without cancer."

That new dynamic accentuates any flaws in their relationship. They're not focused on Maggie just living, so there's more room to examine and focus on smaller issues. James Roday, who plays Gary, told TV Line that he thinks they even rushed things by moving in together.

"I think these two probably don’t know each other as well as they think they do. How could they? The relationship was defined exclusively by keeping her alive," Roday said. "But once you beat something like that, there's a euphoria where you feel like, 'We can conquer anything because we just conquered cancer.' So yeah, they probably jumped the gun ... and now they're having to reverse-engineer all of the steps in a relationship that got skipped."

Allison Miller, who plays Maggie, added to TV Line that there's new pressures in the relationship that they have to confront. "It's kind of like they are meeting two different people now. And they are instantly in each other's space, just on top of each other in a brand new courtship. So that's a lot of pressure," Miller said.

Maggie and Gary probably would have had these relationship growing pains even without Eric, although he did escalate them more quickly. Maggie may take a liking to Eric not only because he has her brother's heart, but because he wasn't part of her cancer story. With him, she gets to just be Maggie, undefined by her illness. By contrast, her cancer will always be a big foundation of her relationship with Gary. In order for them to make it, they need to redefine their relationship without sickness being such a big part of it. Maggie and Gary have overcome a lot in their short time together, and they can probably overcome this Eric obstacle. They just need to truly figure out who they are as cancer-free individuals before they can be a cancer-free couple.