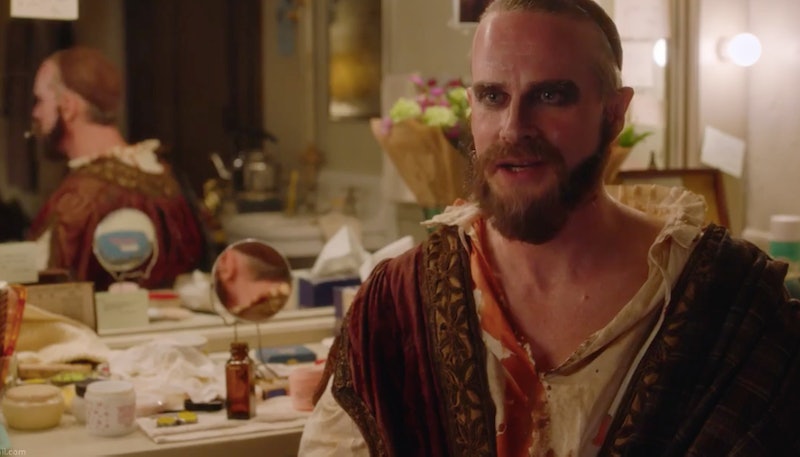 After begrudgingly agreeing to manage Sophie Lennon and expand the "Associates" half of Susie Myerson & Associates, Susie is tasked with casting Sophie in her dream role as Miss Julie on Broadway. She eventually convinces some producers to stage the production, on the condition that she recruits the biggest name in theater to play the male lead. That's where Gavin comes in.

She visits his backstage dressing room, and he's — dramatically, of course — removing his stage makeup after his performance of Macbeth (without ever saying the title aloud — it's a superstition). Elwes' British enthusiasm immediately explodes with his opening lines, and you can't help but compare his character to his satirical roles in Princess Bride and Robin Hood: Men in Tights — both parts as intense as they are funny.

Elwes brings the same balance to Gavin. "Tragedy and comedy, all is one," he says after calling Charlie Chaplin the best performer of all time. Gavin may not be based on a real person, but Elwes' could've easily watched some of Chaplin's work to prepare for this expressive role.

When Susie asks him to join the Miss Julie cast as Jean, he reminds her that he's very expensive, but cheerfully agrees to play the part as a favor. Like in Men in Tights and Princess Bride, Elwes' Maisel arc pokes fun at a classic trope. This time, he's the astute and animated thespian who takes everything a bit too seriously, which is really fun to watch him bring to life.

It's hard to call Gavin a good or bad guy in the broader scope of the show because he's almost always character acting. He seems to be there for entertainment more than anything, but who knows. If he returns in a potential Season 4, he might have more time to reveal who he is when he's not rehearsing, in his dressing room, or performing onstage.

More like this
At 28, Rosie Perez Risked Her Career To Stop Playing Stereotypes
By Gabrielle Bondi
Here’s Everything Coming To & Leaving Netflix In February
By Jake Viswanath
Pamela Anderson’s Dating & Marriage History Could Be Its Own TV Series
By Jake Viswanath
'Abbott Elementary' Fans Probably Missed This 'Parent Trap' Easter Egg
By Sam Ramsden
Get Even More From Bustle — Sign Up For The Newsletter
From hair trends to relationship advice, our daily newsletter has everything you need to sound like a person who’s on TikTok, even if you aren’t.