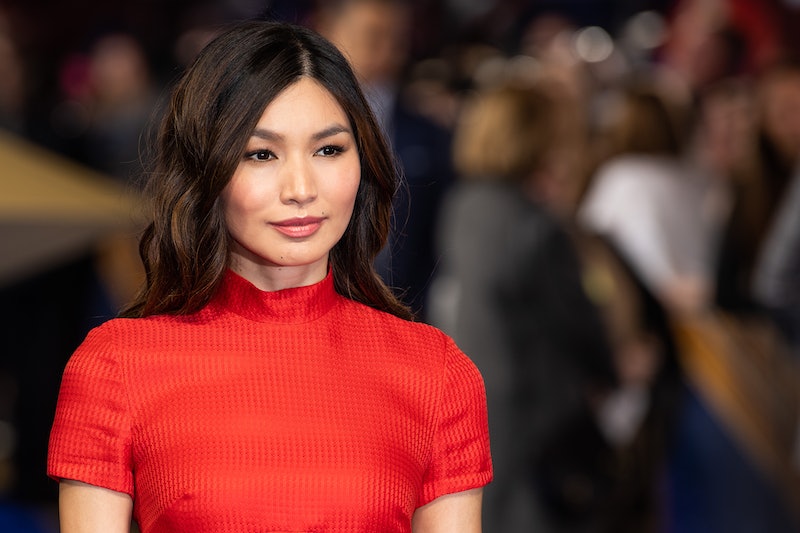 In her eleven-year acting career, Gemma Chan has played everything from blue-skinned aliens to Elizabethan aristocrats, and mixed homegrown British dramas with huge Hollywood blockbusters. Her latest project, I Am Hannah, is one of a new trio of Dominic Savage films airing on Channel 4. Each is led by a different British actor, the other two being Vicky McClure and Samantha Morton, and focuses on a different element of their characters' lives, from coercive relationships to desperate financial hardship, and the pressure on women to have children.

Like the other two I Am lead actors, Chan is carving out a fascinating career for herself. But it's not just in the acting business where her voice commands attention. As well as being outspoken on representation and inclusion within the industry, she has plenty of thoughts to share about the current state of British politics, and is committed to acting on what she believes in, not just talking about it, as her work with charity UNICEF shows.

I spoke to Chan Ahead of I Am Hannah's air date about the brilliance of British TV, her interest in exploring what others dismiss about women's experiences, and the Conservative leadership election.

Aimée Grant Cumberbatch: I've just watched your I Am film. It was fascinating. Yours focuses on a woman called Hannah. What parts of Hannah's story did you identify with?

Gemma Chan: Well I suppose I should say that Hannah's story isn't autobiographical. I haven't been through exactly what Hannah's been through. Thankfully I haven't been on the series of ghastly dates that she's been on. But in terms of the story it's definitely been inspired by conversations that I've with a lot of my female friends with my family.

Hannah's story is about a woman trying to free herself from expectation. And that expectation comes from the external. But also it's about her internal expectations of herself as well.

AGC: Watching it, I felt like parts of it felt quite suffocating. I felt like the there was a real sense of that kind of weight of expectation. Of the other people not giving her room to figure out what she wanted, which is definitely something that I've personally experienced when it comes to things like having children. What was it like to grapple with that?

GC: I was really excited to show a character that was still trying to figure out what she wanted. For some people, things are black and white, but for most of the people that I know, it's shades of grey and there is ambiguity there.

I think there's definitely an element of it, particularly for women, You know, when they hit their 30s [there's a lot of] "Gosh, Well, have you done this? Have you done that? Are you going to run out of time?" That pressure, or feeling of pressure, can build. People always feel very willing to ask and offer up their opinion of what you should be doing, rather than either minding their own business or allowing each person to discover what they want. I wanted to show what she's going through in a really non-judgmental way. I hope that anyone watching it can feel empathy for her. You may not agree with everything that she does and her opinions, necessarily. But I think we can be quite harsh on ourselves and quite judgmental about others. That's the only thing I would want people to come away with is to maybe be a little bit less judgmental.

AGC: When I read about I Am Hannah, I had preconceptions that were quite clear cut, and then to go into it and have all that ambiguity, I think it shows there's always so much going on inside other people's lives that you don't realise. It's so easy to say, "Oh, I just think this about relationships. I think this about children" but it's never really quite like that in real life.

GC: What's become more and more apparent to me is there are there are lots of different ways to live your life, different ways that people can be happy. And what's right for one person isn't necessarily right for another. We should be much more accepting of that. I don't know whether you heard about Professor Paul Dolan. He was talking about how, in his research, he found evidence that single childless women actually ranked really highly in terms of their happiness. [But he found that] people were really suspicious [of his research], or they got defensive, or they couldn't accept that that particular group of women [do] flourish.

That's not to say that it's right for every woman and that's also not to say that people in couples or in relationships aren't happy either, or [people] with children. But it shows that there are lots of different ways that people can be happy. I think we do have more choice now, but I think it's an ongoing adjustment for each of us individually and society more broadly.

AGC: What I found interesting about that research is how it reframed the notion of women who might be single and might not have children as a legitimate way of life that people might actually want to choose.

GC: I think it's interesting [with] women who haven't married or haven't had kids. In the past, they've very much been either regarded with with pity or with suspicion. It's a completely legitimate choice and, again, not necessarily right for every person. I think he said something interesting like: the reason we get defensive is because when we see that someone else has made a different choice from us, if they appear to be happy, we somehow feel that that's a personal judgment on our own choices. I think that we need to get over that defensiveness. It's not a zero sum game.

AGC: They're not in your film, but Samantha Morton and Vicky McClure are heading up their own I Am films as part of the series. How does it feel to be involved in a project where three women are in these three lead roles, telling their own individual stories, with a strong focus on them and their interiority?

AGC: It feels really exciting. I was thrilled to be involved with a project [where] each story has been developed in conjunction with each of the lead actresses. Women [are] half the human race, you know. There's so much there that's interesting that hasn't been necessarily been the focus or certainly hasn't been the main focus of projects before, whether we're talking about film or TV.

I feel really, really glad that it seems to be happening more and that people are developing these stories. I'm reading Three Women [by Lisa Tadeo], which, again, is three women at the centre. It's very much about exploring their lives and their desires. I find that really fascinating.

AGC: That's what I found interesting watching the film. It's about making space for these stories. I think sometimes you hear a lot about the extremes of women's experiences — the shocking, the graphic, or the violent. But I think it's nice for space to be made for the grey areas that you referred to.

GC: The everyday. People can be a dismissive of the everyday experiences of life from a woman's perspective. It might be seen as a small story. [But] I think it's incredibly rich and interesting to go there and to probe. As you say, we often include the extremes but it's a vast, vast spectrum of experience that's there.

AGC: This is a homegrown project with lots of British talent, but you've also worked on major Hollywood blockbusters as well, like Crazy Rich Asians and Captain Marvel. How do they compare?

GC: It's incredibly different. Captain Marvel actually was the last project I'd done before I came back to the UK and filmed I Am Hannah. And you probably can't get two much more extremes. It felt really great to come back and do something that was really intimate with a very small crew.

I'd come from another project, which was, you know, hundreds and hundreds of people, huge sets, I'd been painted blue for six hours every day. So it was was really refreshing to do something on the complete other end of the scale.

AGC: You move between lots of different kinds of roles, whether it's ordinary women, historical figures, or aliens and robots. Do you feel like that, as the industry is developing and changing, and hopefully progressing, that you're more able to carve out the career that suits as opposed to kind of going along with what traditionally might have been expected?

GC: I think, definitely things have shifted and I now have, actors in general and actors of colour, have more opportunities. It's still not easy by any means. But I think I think it's great we're now getting more of a chance to develop these stories and be part of the creative process from an earlier stage, or [even] finding the stories that we want, and then developing them and getting them to screen. It's really exciting because it's not always been that way.

AGC: I imagine you must get asked about diversity and representation in pretty much every interview, but do you feel that the traditional absence of diversity in casting means that actors of colour who do succeed often become spokespeople for diversity, whether or not they want to? And is that something that can be frustrating?

GC: I do get asked about it a lot. On the one hand, I think it's important to be moving the conversation forward. But on the other hand, it will be great when we no longer have to talk about it and it's not a thing. When it's just accepted. I hope that day isn't too far off.

AGC: You've been quite vocal about your frustrations with the current state of UK politics. And I imagine that frustration has only deepened in recent weeks [with the Conservative leadership election]. What are your thoughts and feelings on that at the moment?

GC: It's not even our choice. We don't get a say in who our next Prime Minister is. It's a very small portion of people who are Conservative Party members who get to choose. And, as we know, they are from a very limited demographic, which isn't representative necessarily of the whole country. So it doesn't feel great. I guess we just have to see in the next few months how things pan out. I'm still hopeful that things won't be a complete disaster. [But] it's incredibly frustrating. I think there are a lot of talented people out there who want to help, people who actually really need a government that's working for them. But they seem to be drowned out by more extreme voices and I'm talking about both the the Conservative and the Labour party. It's tough.