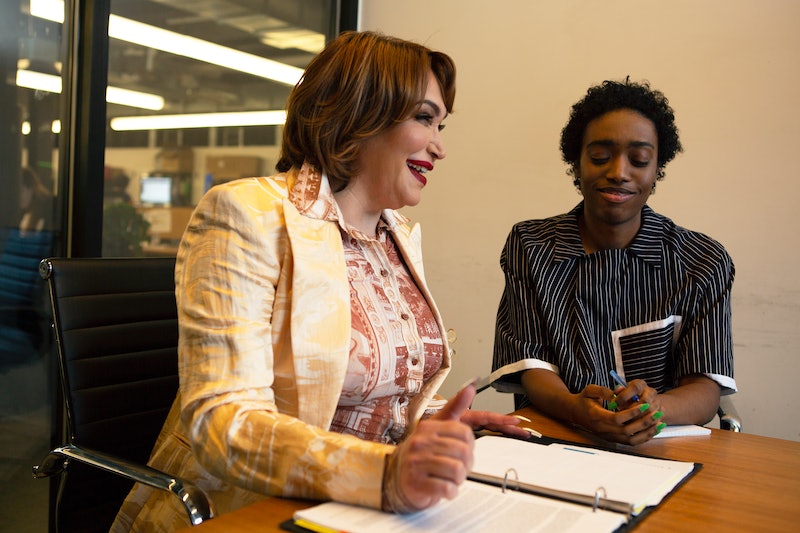 Think about words like "mankind, congressmen, or guys" — chances are, you've thought about how terms like these encourage the idea that manhood and masculinity are society's baseline. This linguistic erasure of women and femininity has long been critized by people concerned about the ways that everyday language further marginalizes gender minorities. And now, a new study agrees, concluding that using gender-neutral language reduces gender biases, The Guardian reported.

The study, published by the Proceedings of the National Academy of Sciences (PNAS), examined the differences in participants’ attitudes about gender when they were prompted to use feminine, masculine, and gender-neutral pronouns to describe a hypothetical situation. According to the results of participants’ activities, the simple linguistic act of avoiding masculine pronouns reduced people’s biases.

People using gender-neutral and feminine pronouns were more likely than those using masculine pronouns to express openness toward women and LGBTQ people. People using masculine pronouns, however, were more likely to express biased views about the capabilities and public lives of women and LGBTQ people. According to the study, “use of gender-neutral pronouns decreases the mental salience of males.” In other words, something as simple and seemingly small as a shift to using gender-neutral language decreases the idea that masculine means neutral in people’s minds.

This is perhaps unsurprising, as feminists have long argued that the assumption that being a man is a universal standard of being a human — using words like mankind to describe all of humanity, for example — is dehumanizing to people who aren’t men. By assuming who gets to define humanity by being the default word and pronoun choice, male dominance in language reinforces other forms of sexism in everyday life.

This is because language both creates and reflects society’s power dynamics. Across the globe, the use of male-centric language reflects societies’ treatment of people who aren’t men, according to a 2012 study published in the journal Sex Roles. Even the gendering of inanimate objects — calling ships “she” or a piece of exercise equipment as “this bad boy,” for example — influences people’s perceptions of the value and character of those objects. This kind of linguistic sexism is even reflected in the supposedly benign process of naming hurricanes, with hurricanes that are assigned traditional women’s names being perceived as less serious. This perception leads to lower evacuation rates and higher death rates associated with hurricanes with traditional women's names. And these linguistic power plays heavily influence real-world dynamics every day.

Sexism in workplace language is deeply reflective of broader misogynist dynamics at work: job listings in the tech industry, for example, often use masculine-associated language, according to a 2011 study published in the Journal of Personality and Social Psychology. And the study found that this isn’t a coincidence, because these same tech jobs demonstrate gender bias in hiring practices. The study also found that the job descriptions in industries that tend to hire more women — office administration and human resources, for example — do not use masculine-associated language like “leader,” “competitive,” or “dominant.”

This latest study, then, has important insight to offer for both daily life and major industry hiring practices. Introducing gender-neutral and/or women-centric language reduces casual bias, and may well get more women and other people who aren’t men hired. In your everyday life, this gender-neutral language might include using gender-inclusive pronouns to refer to people whose gender is unspecified. For example, when you know your friend went to the doctor, asking "What did they say about your blood test?" is a gender-inclusive way to not assume that the doctor is a man. And greeting an audience with a good old "everyone" or "esteemed guests" is much cooler than "ladies and gentlemen."

This kind of language has the added benefit of breaking down transphobia through language: gender-neutral language inherently includes people of all genders. So fellow non-binary people of the world, rejoice: science now says that they/them pronouns are not only valid, but instrumental in promoting social equity.

More like this
25 Inspiring Quotes From Black Women To Celebrate Black History Month
By Kyli Rodriguez-Cayro and JR Thorpe
24 History-Making Black Women You Probably Didn't Learn About In School
By Ayana Lage and JR Thorpe
Twitter Is Identifying With Sally Field & Jane Fonda’s Friendship In New Viral Video
By Jake Viswanath
These Artists Are Reimagining Black History Month To Create A Better Future
By Katie Mitchell
Get Even More From Bustle — Sign Up For The Newsletter
From hair trends to relationship advice, our daily newsletter has everything you need to sound like a person who’s on TikTok, even if you aren’t.