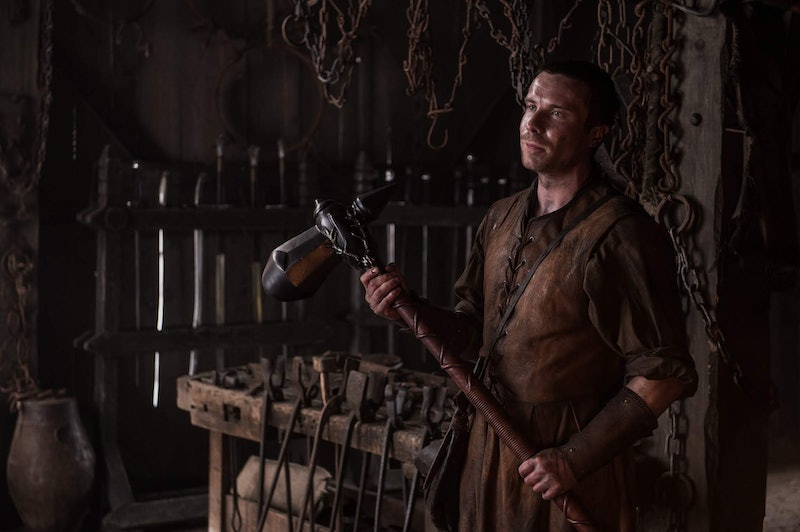 Up until now, HBO has released — maybe — 10 seconds of actual new footage for Game of Thrones' last season. It's of course been tough on fans, who just want something to hold onto until April 14 comes around. So far, there have been posters released and info given, but it wasn't until Tuesday, March 5 that fans got to feast their eyes on the first GoT trailer for the final season. There's a lot going on, but one thing people seem to love is that Gendry is in the Game of Thrones Season 8 trailer, meaning he's not only alive and well, he's in the middle of the action.

It opens up with Arya Stark running for her life in a darkened corridor, bloodied and terrified, it seems. Totally unlike the confident, tough demeanor Arya normally has. But, all your favorite heroes are facing off against something unlike what they've seen before, so it sort of makes sense. The trailer also shows that Daenerys and Jon are still on pretty good terms, and Jaime Lannister seems to be telling someone — probably Cersei — that he'll choose to fight the war against the White Walkers rather than one against humans. This stand from Jaime, since Cersei wants to backstab her promise at the council in Season 7 by advancing her fight to stay on the Iron Throne.

But it's the return of Gendry in the Season 8 trailer that has a lot of people buzzing. He's in a blink-and-you'll-miss-it moment, but he's still there nonetheless. In his few seconds onscreen, Gendry is doing what he does best, making weapons — and looking pretty good doing it. As Gendry works on his arsenal, Jon Snow can be heard offscreen saying, "They're coming. Our enemy doesn't tire, doesn't stop. Doesn't feel." This suggests that Gendry is probably working on making weapons out of Dragonglass — the only known substance that'll kill the White Walkers' army — and producing armor suitable enough to fight in the cold of the North.

As stated above, Gendry only appears in one shot in the trailer, but he definitely makes an impact. In fact, fans were quick to jump on his brief presence, immediately sensing his appearance could hold significant meaning about his role in Season 8. And what would be more significant than sitting on the Iron Throne?

Onto the theories. If you're a fan of the show, you know that Gendry is the only living son of late King Robert Baratheon. He's an illegitimate son, yes, but he's still the last man alive with Baratheon blood running through his veins, so he technically has a right to the Iron Throne. Cersei, who currently sits on it and resides in King's Landing, only has a claim to it by marriage (and then parental lineage, since her two sons sat on it before her).

Beyond the fact that Gendry has a claim to the Iron Throne, and the theory that he'll get to act on that this final season, there's more that could prove he wins that ultimate title in the end. On Feb. 28, HBO released the official Game of Thrones Season 8 posters for each character, giving each a chance to sit on the Iron Throne. All of the main characters were there, but also some others who have no hope of actually claiming the right to Westeros (like Grey Worm, Missandei, and The Hound). But Gendry, who has a real shot at it, was left out. Sure, it could be an oversight. But it could also mean that Gendry is destined for more than fans know.

With his lineage a huge advantage for him, and that super suspicious poster snub, it's looking like Gendry will play a big role this season. Daenerys and Cersei won't even know what hit them.