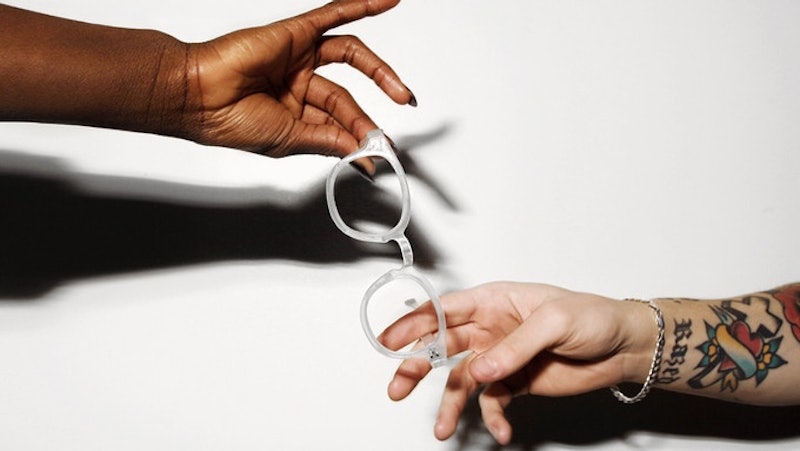 "Flint still doesn’t have clean water." Ali Rose relates this matter-of-factly over the phone, but her exasperation about what's happening in the Michigan city is apparent. Even though Flint officials say the levels of lead in the water no longer exceeds federal limits, residents still rely on bottled water. So Rose, a Detroit native, had an idea while volunteering with The Red Cross to distribute bottles of water. What if something could be made from all of the plastic bottles being used?

That idea birthed Genusee Eyewear, a company co-founded by Rose and Jack Burns that recycles plastic bottles from Flint to make eyeglasses and sunglasses. If the company reaches its Kickstarter goal, which ends Friday, May 18, it'll receive $50,000 in funding. As of Wednesday afternoon, the project was less than $7,000 away from the goal.

At the height of the water crisis, Michigan declared a state of emergency and handed out 176,000 cases of bottled water over a three-week period, MLive reported. Rose tells Bustle that Genusee — a name derived from Genesee County, where Flint is located — started as a casual conversation about how to help recycle plastic and "not really with the intention of starting a business," she says.

But once she talked to Flint residents and they expressed the need for stable employment in the area, the solution seemed obvious. Along with its mission of environmental sustainability, Genusee will manufacture its products in Flint. According to the Bureau of Labor Statistics, the city's unemployment rate is only slightly higher than the national average, but only 11 percent of residents have college degrees. "We asked the community what they wanted and what they needed," she says.

Right now, there's only one style of glasses available. The Roeper glasses will retail for $129 and come in "classic black" or "crystal fog." The lenses are anti-reflective and UV protective, according to the Kickstarter, and backers of the campaign can get a slight discount on the retail price.

Rose says she and Burns want the company to impact the city both socially and environmentally, and "be part of the long-term solution." The company's four goals include reducing local plastic waste, creating living wage jobs, encouraging a circular economy and giving back to Flint. And Genusee isn't alone. Efforts like the "Made in Flint" fashion collection also use the water bottle waste for good.

The company's launch comes in the midst of controversy about whether the water in the city is actually safe for residents. In April, Michigan governor Rick Snyder said the state government would no longer provide free bottled water to the community because the water system is stable. “I have said all along that ensuring the quality of the water in Flint and helping the people and the city move forward were a top priority for me and my team," Snyder said in a statement.

Even though Flint's water now meets federal standards, PolitiFact says the city won't be safe until all of its old pipes are replaced, which is currently planned for 2020. And the city will have to gain back the trust of the residents who feel misled. Flint officials allegedly minimized concerns about the contaminated water, according to the Washington Post, and are accused of assuring residents that the water was safe to drink even though it was foul-smelling and discolored. "I can’t imagine anyone living in that city and not using bottled water," Rose says. "Even when they say it’s clean, people don’t know and trust it."

Rose hopes that the company's sustainable mission also helps spread the word that the situation is still deserving of outrage and attention. "Flint is Everytown, USA. What happened in Flint can happen to any city built around the same time with the same infrastructure," she says.

Her dream for the company, she says, is that they will have trouble sourcing water bottles for the glasses — but with the high plastic consumption rates in the U.S., that's unlikely. If Genusee meets its Kickstarter goal, the team will hit the ground running in hopes of bringing sustainble employment to Flint. "We're not going to let this fail," Rose says.