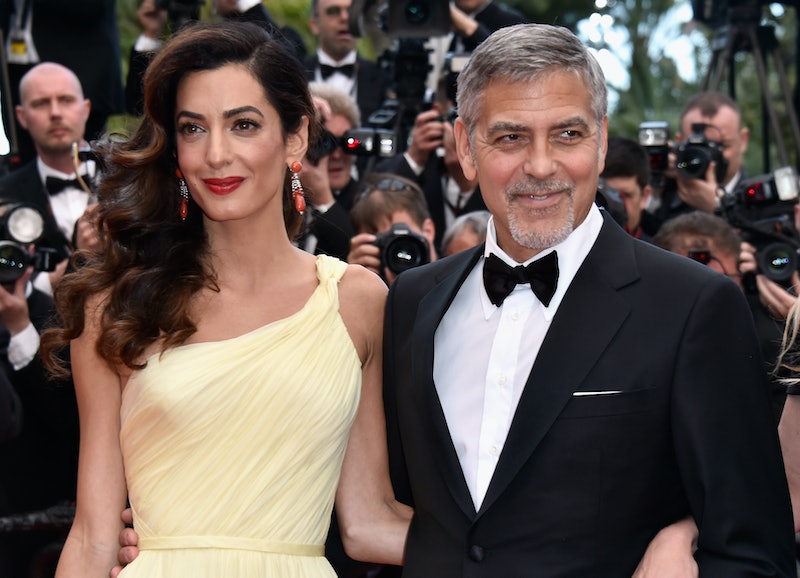 If nothing else good happens in 2017, it's totally OK, because later this year, George and Amal Clooney will be welcoming twins, their first children together. When the good news broke earlier this month, it was impossible not to be ecstatic for such an awesome couple, and now, the father-to-be is opening up about what the future holds for him and his growing family. On Sunday, George spoke out about Amal's pregnancy for the first time, and it's adorable how excited he seems about becoming a dad.

His comments came during an interview with a French news show called Recontres de Cinema following last weekend's Cesar Awards, and although Clooney is usually a man of few words when it comes to his personal life, this time, things seemed different. Actually, he was pretty open about how he feels about his wife's pregnancy — and how the people in his life reacted to the news — and it's a refreshing change from how private he usually is. Maybe this is a sign that everything we know about this guy is about to change?

Clooney told the show, via People:

"We are really happy and really excited. It's going to be an adventure. We've sort of embraced it all... with arms wide open."

Even though Clooney may be a little older than most first time dads, it sounds like he's getting more comfortable with the idea, mostly because French actor Jean-Paul Belmondo was 70 when he welcomed his first baby.

He also revealed what happened when he told his friends the news, and it resulted in a pretty funny story. "It got really quiet, and then they all started making baby crying noises. And the whole table just busted up laughing," he said. Yeah, that's a scene I really wish had been caught on camera.

I love how open Clooney is being about his impending fatherhood, and I hope it means he'll be sharing more details after the babies are born. I totally respect how private he is, but who doesn't want tons of photos of those twins? You know they're going to be absolutely gorgeous!

More like this
Britney Spears & Sam Asghari Called Out Kevin Federline’s Claims About Her Kids
By Grace Wehniainen
Nicola Walker’s IRL Husband Is No Stranger To TV Screens
By Darshita Goyal
Laura Tott From 'First Dates' Married Her Long-Term Mystery Boyfriend
By Darshita Goyal
Who Is Camila Cabello Dating? She's Getting Cozy With Lox Club CEO Austin Kevitch
By Radhika Menon
Get Even More From Bustle — Sign Up For The Newsletter