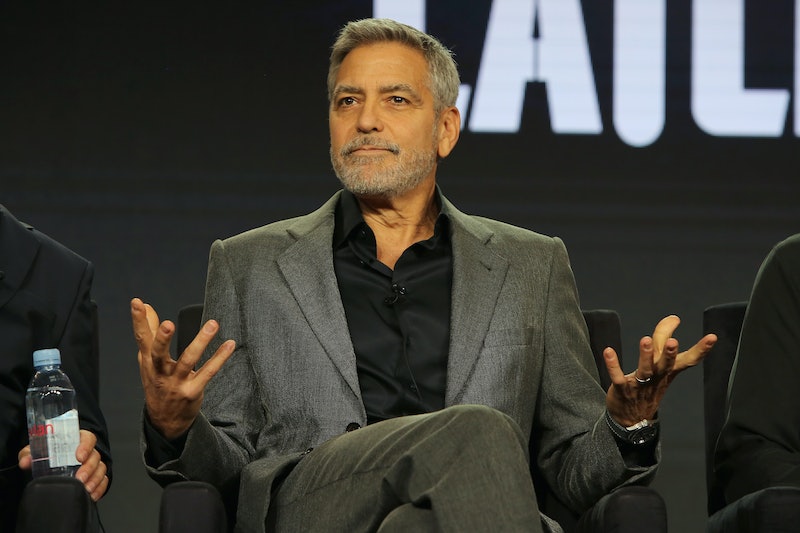 Doug Ross may have hung up his white coat and stethoscope over 19 years ago, but that doesn't necessarily mean the character is gone for good. While out promoting his new six-episode Hulu miniseries Catch-22, George Clooney revealed that he wants an ER reboot to happen, and his motivation behind it begins and ends with the other popular medical drama, Grey's Anatomy. Turns out Mr. Clooney isn't too thrilled by the fact that the Seattle-based series is now gearing up to officially beat ER's record as the longest-running medical drama and he's willing to do whatever it takes to win that honor back.

"I did know that," Clooney stated, according to E! News, when asked about Grey's surpassing ER's run during Catch-22's TV Critics' Association panel. "That's got to stop. We gotta go back and do some more," he joked. The episode that will put Grey's at the front of the pack will air later this season, so there's not a lot of time left before ER loses its crown. And while Clooney's remarks may simply be all in good fun (and a fun way to mess with our minds and hearts), upon further questioning he also didn't entirely rule the possibility out for the future.

Instead of saying an outright no, he dodged directly answering the question by posing another one himself. "Do you think that's a good idea?" he asked the outlet. "I'd play a patient now!" The actor can joke all he wants, but if past experiences have taught us anything, it's that anything other than a direct "no" leaves the possibility of a reboot wide open down the line. And the fact that Clooney has the proper motivation to get the County General Hospital gang back together again (in order to steal back their record-breaking title from Grey's), the odds may feel more likely than ever.

While further discussing ER during the TCA panel, Clooney described his time on the show as a "nutty moment" not only in the grand scheme of his career, but in the "lives of a bunch of actors, six of us, who were suddenly thrust into the stratosphere." But considering that the series lasted for a total of 15 seasons, clocking in at a total of 331 episodes, it definitely meant a lot to fans, which makes the idea of a reboot all the more intriguing. We are living in the age of reboots and revivals, after all. With the return of beloved '90s shows like Will & Grace, The Conners, and Fuller House, many would love to see some sort of ER remake added to the growing lineup.

Could Clooney's comments lead to anything really happening? Maybe not, but just knowing the option is out there and wasn't immediately shut down is enough to give us hope for the future. Perhaps after all these years, Dr. Doug Ross will scrub in for surgery once again and help us all to recapture what it was that made us fall in love with the ER in the first place.