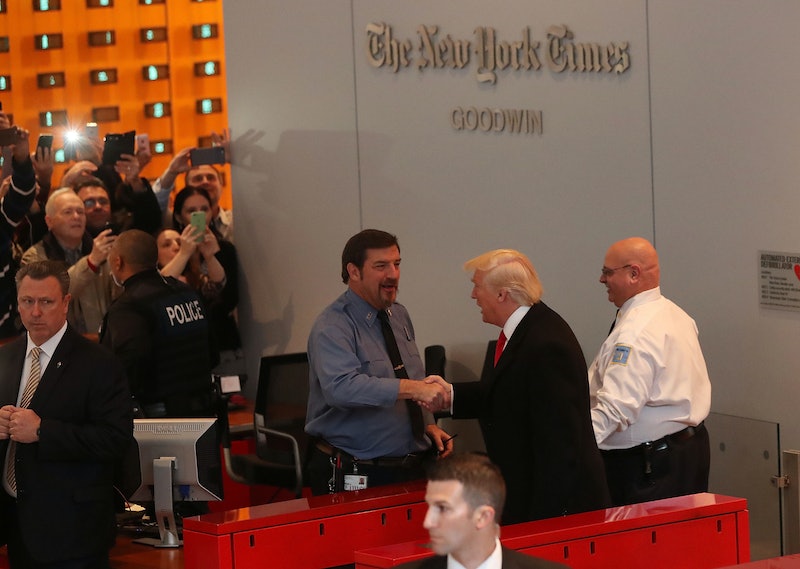 On Wednesday, Kellyanne Conway's husband George Conway asked Twitter to vote whether Trump or The New York Times is a more credible source. Conway, a D.C.-based lawyer, has long been a critic of his wife's boss, and has even written op-eds that challenge the behavior of the Trump administration. This Twitter poll hints his opinions on POTUS haven't changed. Within 24 hours, the tweet has already received over 188,000 votes.

Conway took to Twitter on Wednesday to respond to Trump's Feb. 20 tweet, which reads, "The New York Times reporting is false. They are a true ENEMY OF THE PEOPLE!"

In response, Conway released a pair of tweets, one of which included the poll. Conway wrote,

In light of this tweet, let’s pose the question ... Please vote. And then please retweet (often). Who has more credibility?

Voters could choose between "Donald Trump" and "The New York Times." They voted overwhelmingly in favor of the newspaper publication, with 93 percent of voters declaring The New York Times to be a more credible source than the president of the United States. As of Thursday evening, the tweet has been retweeted over 38,000 times.

This poll is just the most recent in a long string of criticisms Conway has made about Trump. Conway's Twitter feed is dominated by his own tweets criticizing the administration, as well as retweets of other criticisms, and a few corgi appreciation posts as well.

On Feb. 17, after Trump tweeted, "THE RIGGED AND CORRUPT MEDIA IS THE ENEMY OF THE PEOPLE!," Conway tweeted back to the president, "The Lord made Sunday a day of rest. You could at least take one day off from debasing your office."

Conway even founded the group "Checks and Balances" in November, which unites a group of attorneys who all wish to speak out against abuse of power. The group is comprised of a collection of "traditionally conservative" attorneys, according to its mission statement, and aims to "provide a voice" for conservatives who believe in the rule of law, among other things.

To The New York Times in November, Conway said, "There’s a perception out there that conservative lawyers have essentially sold their souls for judges and regulatory reform. We just want to be a voice speaking out, and to encourage others to speak out."

The political dissonance within the Conway household has certainly confused people for a while now. In an August profile of the married couple, Kellyanne said to The Washington Post, “I feel there’s a part of [my husband] that thinks I chose Donald Trump over him. Which is ridiculous. One is my work and one is my marriage.” She added of his criticism of the president, "I think it’s disrespectful. I think it disrespects his wife.”

Conway doesn't seem to ever mention his wife's role in the Trump administration when he tweets about POTUS, but he did tell The Washington Post that he regrets introducing her to Trump in 2001, back when they lived in Manhattan's World Trump Tower. As for how credible he believes the president to be — his poll speaks for itself.