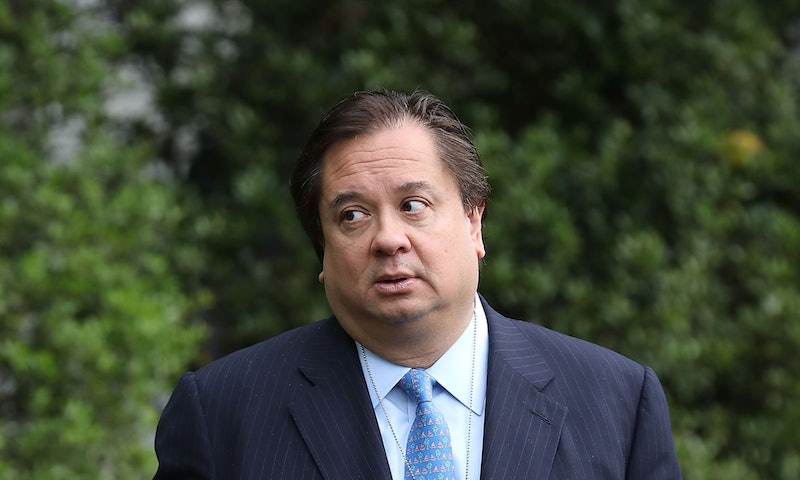 On Monday, White House senior adviser Kellyanne Conway was probably helping President Donald Trump prep for the biggest meeting of his 71 years, or at least did work to further his agenda. That same day, her husband George Conway defended Robert Mueller's Russia probe, and yes, the article totally mentioned Trump.

On June 4, Trump tweeted that investigation led by the former FBI director was unconstitutional: "The appointment of the Special Counsel is totally UNCONSTITUTIONAL! Despite that, we play the game because I, unlike the Democrats, have done nothing wrong!" (His first tweet used a misspelling of Mueller's title.)

Conway begins his piece for LawFare by mentioning this fact. He posits that Trump took this information from recent writing by legal scholar and Federalist Society founder Steven Calabresi. Regardless of the source, Conway asserts, the president's claims are ultimately still wrong. "Unfortunately for the president, these writings are no more correct than the spelling in his original tweet," Conway wrote.

In Calabresi's view (and according to Conway's analysis, the president's view as well), Mueller's entire investigation should be scrapped because it violates a particular section of the U.S. Constitution: the Appointments Clause in Article II, Section 2, Clause 2.

But as Conway goes through Calabresi's argument, he comes to a straightforward conclusion: "This assumption is just wrong—uncomplicatedly, flatly wrong."

It might be too much candor, even for a president as off-the-cuff as Trump.

Trump's primary conclusion in his brief tweet is that the Mueller probe is unconstitutional. This seems to be a rather important point to Conway, who spends part of the essay defending just that. Here's a noteworthy excerpt from Conway's essay regarding the constitutionality of Mueller's investigation:

Against this unsupported rhetoric, moreover, there is an actual public record—an extensive one—to cite and review. A record consisting of, among other things, the regulations under which Mueller was appointed; the order under which he was appointed; the correspondence and sworn testimony of the principal officer, Acting Attorney General Rod Rosenstein, who appointed Mueller; as well as an actual court decision discussing the special counsel’s authority. All these materials make clear that Special Counsel Mueller is an inferior officer, appropriately supervised and directed by Rosenstein.

In his more than 3,000 words of legal analysis, Conway concludes there is no merit to the argument against the constitutionality of the Mueller probe. He writes, “There is no serious argument that Special Counsel Mueller’s appointment under the Department of Justice’s regulations violates the Appointments Clause specifically or the separation of powers generally.”

Conway is no liberal, either. According to a profile in The Washington Post, he led the Federalist Society while at Yale Law School. And at one time, Conway helped Paula Jones, a former Arkansas state employee, to sue President Bill Clinton for sexual harassment. While he wasn't officially on the legal team or the attorney of record, Conway did a lot of unpaid but critical work for the legal team, including research and legal briefs, according to The Washington Post. A judge ultimately dismissed the lawsuit and Clinton and Jones settled outside of court.

Despite his conservative bonafides and his wife's winning campaign, Conway doesn't appear to be eager to affiliate himself with the Trump White House in any manner. Unlike Trump, Conway rarely tweets; now he really only retweets others. The subjects are varied but center on Washington, D.C. and politics.

This wasn't always the case. In March 2017, Conway posted a series of tweets that were distinctly critical of the Trump White House. He called Trump's mode of operating "absurd" in a now-deleted tweet. "So true. It's absurd," he wrote, before adding with an apparently sarcastic tone, "which is why people are banging down the doors to be his comms director." Conway eventually told CNN that he deleted the tweet for "no reason." He also un-retweeted a tweet that was critical of reports that senior officials supposedly had to sign non-disclosure agreements.