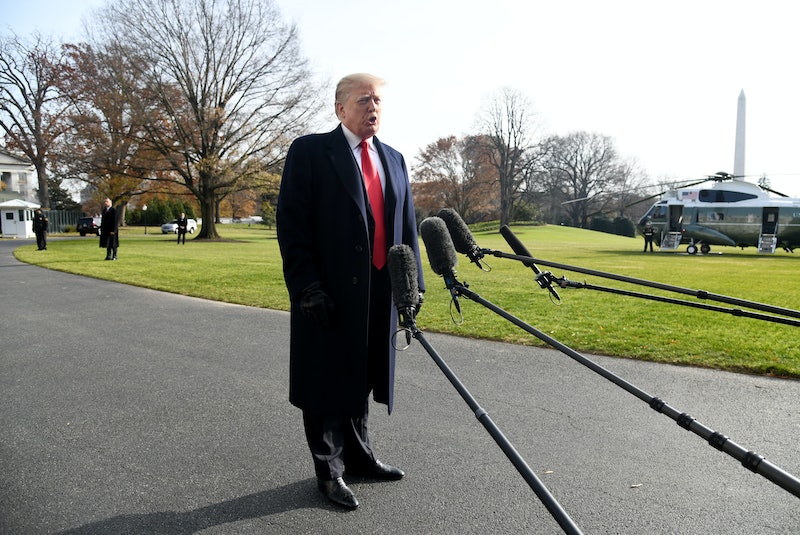 With President Donald Trump's well-documented preference for Twitter as a main means for his public communication, it's no surprise that the social media platform has provided a number of the main storylines in the Trump administration. One of the more surprising of those, though, has been the rise of White House senior advisor Kellyanne Conway's husband George as a frequent Trump critic. In his latest comment, George Conway responded to Trump's tweet about his legal situation, and Conway's fact-check doesn't look good for the president.

"'Democrats can’t find a Smocking Gun tying the Trump campaign to Russia after James Comey’s testimony. No Smocking Gun...No Collusion.' @FoxNews," Trump tweeted on Monday morning, sparking a flurry of responses jumping on his repeated misspelling of the word "smoking."

"That’s because there was NO COLLUSION," the tweet went on. Trump then continued into a second tweet:

So now the Dems go to a simple private transaction, wrongly call it a campaign contribution,... which it was not (but even if it was, it is only a CIVIL CASE, like Obama’s - but it was done correctly by a lawyer and there would not even be a fine. Lawyer’s liability if he made a mistake, not me). Cohen just trying to get his sentence reduced. WITCH HUNT!

In his response, then, Conway addressed Trump's claim that "the Dems" had somehow made up an illegal campaign contribution. In fact, as Vox explained, federal prosecutors have argued that Trump coordinated with his former lawyer and fixer, Michael Cohen, to give hush money payments to two women threatening to go public with allegations of affairs with Trump during the 2016 election. Those payments, prosecutors say, amounted to illegal and undeclared campaign contributions. In his response to the president, Conway corrected multiple claims present in Trump's tweet.

"No, the criminal campaign-finance violations were found by professional line prosecutors in a Republican-controlled United States Department of Justice," Conway wrote, re-tweeting Trump's first tweet. "It looks like a pretty good case. Kudos to them."

Importantly, the claim that the payments violated campaign finance laws didn't just come from prosecutors, as Trump seems to suggest in his tweet. Cohen actually pleaded guilty in court for having made illegal campaign payments earlier in the year, and then he added a guilty plea for having lied to Congress in late November.

Trump, in his tweet, claimed that Cohen's guilty pleas were only an attempt to "get his sentence reduced," a variation of an argument that he's used before in relation to Cohen's cooperation with the authorities. This also doesn't hold water, though, as federal prosecutors from the Southern District of New York argued in the sentencing documents that Cohen's cooperation with special counsel Robert Mueller wasn't enough to get him out of the "substantial term of imprisonment" that they requested for him.

In his rebuke of Trump's claims, Conway made it clear that the prosecutors working on Cohen's case weren't driven by partisan animus and that their case — which was strong enough for Cohen to plead guilty to multiple charges — is a solid one. At least in George Conway's mind, Trump's defense based on something he saw on Fox News isn't really standing up to what actual federal prosecutors already have to work with.