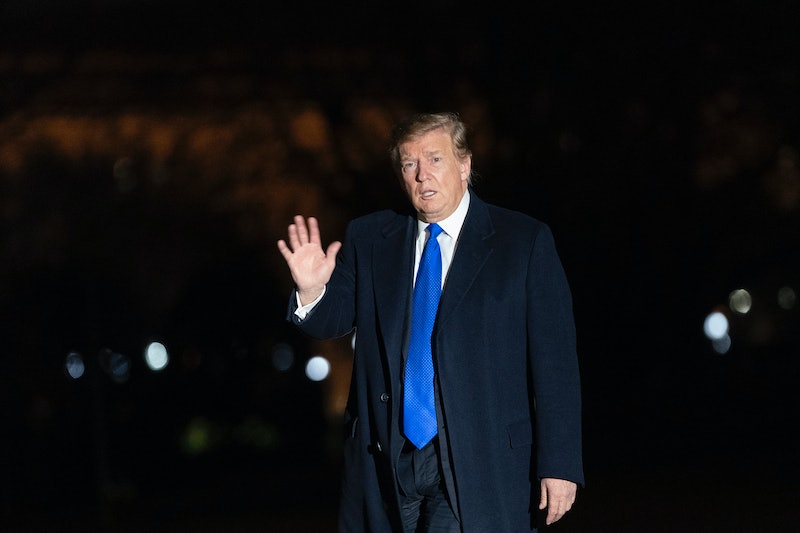 In an article that dives deep into the Trump administration's relationship with Fox News, The New Yorker mentioned the president's relationship with another cable news network, CNN — and how attacks have gone beyond yelling "fake news" to include allegedly trying to stop the Time Warner-AT&T merger. Now, in response, George Conway says President Trump's alleged offense is impeachable.

"If proven, such an attempt to use presidential authority to seek retribution for the exercise of First Amendment rights would unquestionably be grounds for impeachment," Conway posted to Twitter on Monday.

Conway is specifically talking about the allegation that President Trump told Gary Cohn, former Director of the National Economic Council, to stop the merger, perhaps because the president doesn't like the news channel's coverage.

Bustle has reached out to the White House for comment. Cohn reportedly left angrily when he was first asked. "Don’t you f*cking dare call the Justice Department. We are not going to do business that way," Cohn reportedly told Kelly.

The Justice Department did sue to block the merger but was ultimately unsuccessful. The final say came in late February when a panel from the U.S. Court of Appeals for the D.C. Circuit declined the request from the DOJ to appeal the original ruling.

The original challenge was on antitrust grounds with the Justice Department saying the combined company would have "both the incentive and the ability to raise its rivals' costs and stifle growth of innovative, next-generation entrants." The courts disagreed.

It was not the main matter considered in the decision, but CNN reported that during the appeals process AT&T did write in a brief that Trump had said as a candidate that he would move to stop the merger, something that could have influenced the DOJ, AT&T argued. Now, The New Yorker piece suggests that the influence did not end when Trump was elected.

Conway went on to post several more times on Twitter about the article and that allegation. He quoted the part verbatim where Cohn doesn't agree to complete the president's alleged request. Then he quoted others who mention what happened.

He retweeted a tweet by journalist Dara Lind who noted that even though the president ordered Cohn to intervene, he didn't. "As some of us have been saying since literally 2016, there's more to exec branch than POTUS, and lots of veto points btwn impulse and action," Lind wrote. Conway's wife Kellyanne Conway works as an adviser to the president.

Conway also retweeted a Harvard professor, Cass Sunstein, who shared more on what is impeachable. "Under the Constitution, use of presidential authority to punish political enemies is an impeachable offense," Sunstein posted. "That conclusion emerges from the ratification debates, and it can be traced to the Revolutionary War."

This is not Conway's first wry remark or critical tweet about the president. He and his wife even addressed it in an August Washington Post piece. Kellyanne called it "disrespectful" and he called it an outlet for self-expression.