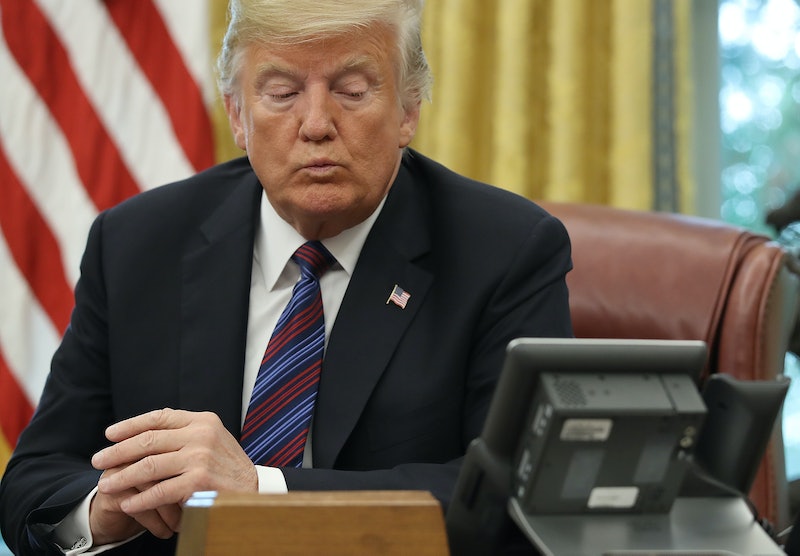 On Sunday, as he often does, Donald Trump tweeted. One attorney and op-ed writer quickly and sharply fired back. In his response, George Conway trolled Trump for not taking the day off from Twitter, even on Sunday.

"The Lord made Sunday a day of rest," Conway tweeted. "You could at least take one day off from debasing your office."

The response, which came by way of a quote-tweet, included an all-caps message that Trump sent out earlier Sunday morning. It was a familiar declaration taking aim at the media.

"THE RIGGED AND CORRUPT MEDIA IS THE ENEMY OF THE PEOPLE!" Trump wrote. He did not point to any specific event or person that may have prompted such a strong statement. However, the tweet he sent out just beforehand took a swipe at NBC News and Saturday Night Live. It was not clear whether they were supposed to relate to one another.

Conway's commentary on Trump's tweeting habits is significant in part because he is married to one of the president's most high-profile advisers — Kellyanne Conway. But even though his wife serves the president in a highly visible capacity, Conway has not shied away from levying criticism against Trump, both comically and seriously.

Several times over, Conway has penned op-eds criticizing Trump's decisions as president. (Occasionally he co-authors them with other writers.) And the president appears to take notice, at least sometimes.

In response to a November op-ed in The New York Times, wherein Conway and co-writer and fellow lawyer Neal Katyal took issue with Trump's selection for an interim attorney general, the president brushed him off. "He's just trying to get publicity for himself," Trump told reporters, according to Politico. He also referred to Conway as "Mr. Kellyanne Conway," according to the report, and said that he didn't really know him.

Neither of the Conways generally comment on the fact that one of them is making a living advocating for the president while the other has developed a reputation for criticizing him. But in an August profile published by The Washington Post, Kellyanne did broach the subject.

“I feel there’s a part of him that thinks I chose Donald Trump over him,” she said of her husband at the time. “Which is ridiculous. One is my work and one is my marriage.”

While Conway's trolling responses to Trump's online presence are not necessarily very different from those penned by any other critic, his one degree of separation from the president tends to make them noteworthy. Kellyanne made a significant name for herself when she loyally stumped for Trump on the campaign trail, where she worked as the then-candidate's campaign manager. And it seemed as though she had nothing but staying power when she was named as a presidential counselor following Trump's successful election. That her husband has so publicly taken to criticizing her boss often grabs people's attention.

The president has not yet publicly responded to Conway's most recent tweet about him. But whether or not he eventually does, it's likely that Kellyanne's husband will continue to make his opinions known.