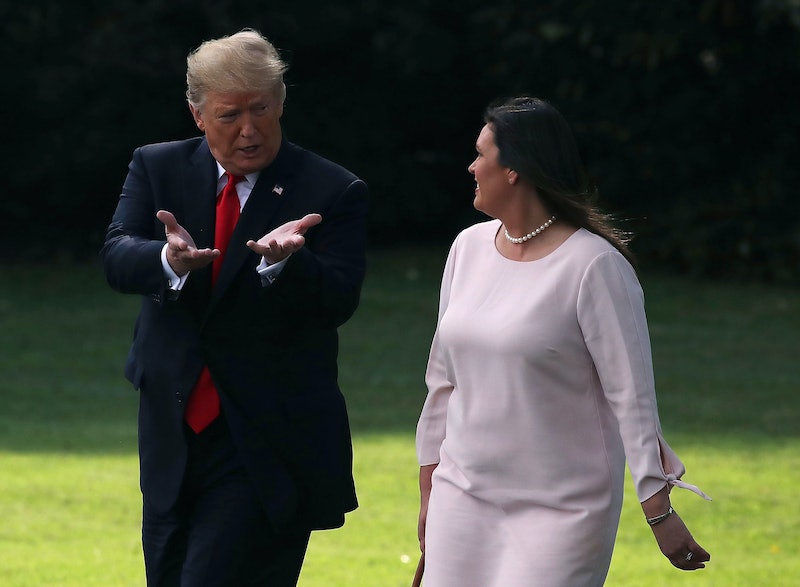 After Sanders claimed that Mueller's report "did not find any collusion and did not find any obstruction," Conway made it clear that he did not agree with this take. “While this report does not conclude that the President committed a crime, it also does not exonerate him. Pls fix. Thx.," Conway wrote.

Barr's letter to Congress indicated that Mueller found no evidence of the Trump campaign colluding with Russia during its investigation. However, the summary noted that there was less clarity regarding whether or not the president may have committed obstruction. " [The special counsel's report] did not draw a conclusion — one way or the other — as to whether the examined conduct constituted obstruction," the summary read, per Vox. In his tweet, Conway appeared to suggest that Sanders and the White House didn't accurately portray what the Attorney General said in his letter.

This isn't the first time Conway has taken Trump and members of his staff to task on social media. Just last week, Trump and Conway got into a widely publicized tiff on Twitter after Conway released a series of tweets questioning the president's mental health, CNBC reported. While Trump didn't comment directly on the content of Conway's tweets, he hit back at him multiple times. In one tweet, the president suggested that Conway is "a total loser!" In another, he wrote that Conway is a "husband from hell" who is jealous of his wife's work in his administration. As the president tweeted:

George Conway, often referred to as Mr. Kellyanne Conway by those who know him, is VERY jealous of his wife’s success & angry that I, with her help, didn’t give him the job he so desperately wanted. I barely know him but just take a look, a stone cold LOSER & husband from hell!

Notably, Conway's wife, Kellyanne, who serves as President Trump's counselor, appeared to come to the president's defense during a Politico interview about the Twitter spat between the two men on March 20, saying that Trump has the right to defend himself against criticisms. “He [Trump] left it alone for months out of respect for me,” Kellyanne told Politico. “But you think he shouldn’t respond when somebody, a non-medical professional accuses him of having a mental disorder? You think he should just take that sitting down?”

Kellyanne also noted to the outlet that the president was "obviously defending" her and emphasized that the dispute between Trump and Conway wasn't affecting her career. “Why would it affect my job? Hasn’t everybody tried to push me out already and here I am, stronger than ever,” she asserted to the outlet. “You're looking at it the wrong way.”

Overall, it's clear that, despite his wife's senior role in Trump's administration, Conway doesn't hesitate to call out the president and his staffers if he deems it necessary. As news about the contents of the special counsel's report continues to unfold, it will be interesting to see whether Conway offers further commentary on the matter.