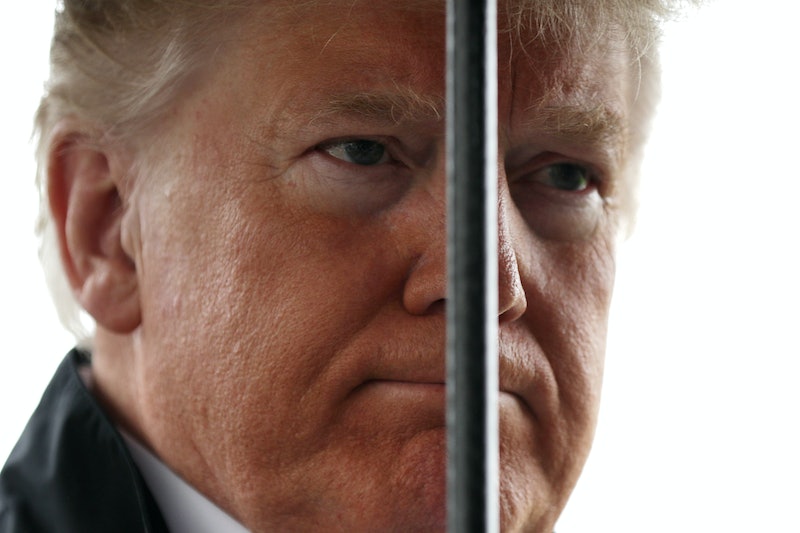 Kellyanne Conway may take to cable news day in and day out for her boss, President Donald Trump, but her husband continues to do his own thing on the internet. On Wednesday morning, George Conway responded to Donald Trump on Twitter to point out that the president was skimming past an important detail in a Washington Post op-ed. Conway took the time to point out the line "Trump lies all the time" from the piece after the president quoted the parts that made him look good.

Marc Thiessen wrote a piece for The Post on how Trump "may be remembered as the most honest president" in modern history. Thiessen based this argument on the number of promises Trump has made as a candidate and seen come to fruition in office — "for better or worse."

Thiessen never said Trump didn't lie, though. And that is what Conway pointed out. "In the second sentence of the same opinion piece, Thiessen also said, 'Don’t get me wrong, Trump lies all the time,'" Conway posted to Twitter, quote tweeting the president's earlier tweet.

Thiessen spells out two of the things he admits Trump has lied about in his piece (there are many more according to Politifact). "He said that he 'enacted the biggest tax cuts and reforms in American history' (actually they are the eighth largest) and that 'our economy is the strongest it’s ever been in the history of our country' (which may one day be true, but not yet)," Thiessen wrote.

But that was, to Trump's credit, not the main focus of the piece. Some of the things that Thiessen, a former George W. Bush speechwriter and fellow at the conservative think tank American Enterprise Institute, mentioned Trump following through on were moving the U.S. embassy in Israel from Tel Aviv to Jerusalem, fighting ISIS, the travel ban, and holding Syria accountable if it used chemical weapons.

The most recent accomplishment for Trump that Thiessen recognized was Justice Brett Kavanaugh's confirmation to the Supreme Court, given his promises to nominate others "in the mold" of Justice Antonin Scalia.

He noted that tax reform was on the president's agenda and he followed through (although critics would call it simply a tax break). Thiessen also mentions the administration getting rid of many regulations, just as Trump promised from the campaign trail.

Thiessen contrasted all these examples with one from President Barack Obama, as if to prove the point. He talked about the Affordable Care Act and how Obama said at the time, "If you like your health care plan, you can keep it." That didn't end up being the case for many Americans.

"The fact is, in his first two years, Trump has compiled a remarkable record of presidential promise-keeping," Thiessen argued. "He’d probably say it’s the best in history — which may or may not end up being true. It’s too soon to tell."

Trump would surely tweet that it is — and Conway would be happy to correct him.