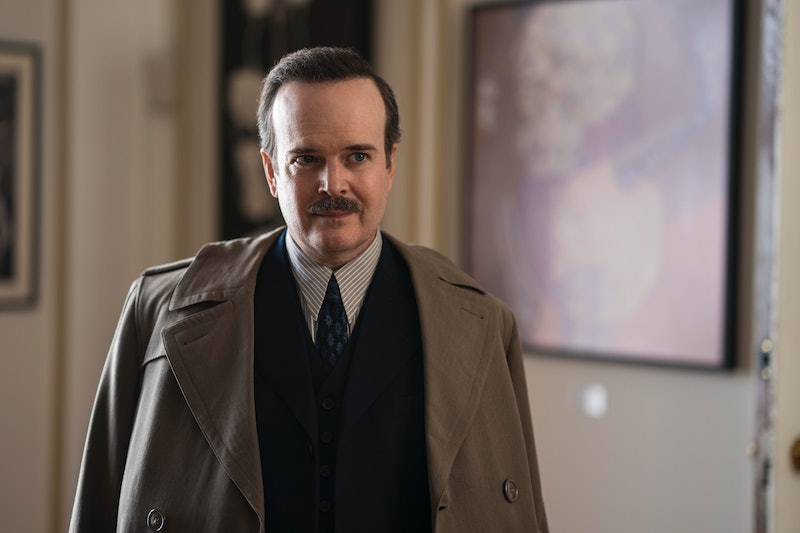 TNT's new mystery thriller I Am The Night brings together some huge names to tell an infamous story. Chris Pine and India Eisley star in the Patty Jenkins-directed project, which is inspired by the real life of Fauna Hodel. Part of Fauna's family history includes her grandfather, George Hodel's trial, and his alleged involvement in the 1947 Black Dahlia murder. (George was never officially tried or charged for the killing, but was tried for a separate case).

According to a project published by the University of North Carolina, Hodel was accused of sexual abuse by his then-14-year-old daughter (and Fauna's mother), Tamar, in 1949. However, he denied her accusation and was acquitted of the charges. DuJour magazine, who interviewed Tamar in 2015, reported that she was sent to a juvenile detention home after the trial.

According to the official One Day She'll Darken site, Tamar went on to have five children, including Fauna, who she gave up for adoption. Tamar died in October 2015, but according to the obituary her brother, Steve Hodel, published for Fauna following her own death in 2017, the two reconnected in Hawaii during the 1970s.

Though George was acquitted, the trial prompted the Los Angeles Police Department to bug Hodel's home, per UNC. According to the Associated Press, one of the transcripts of the recordings obtained during that time reportedly included George saying, "Supposin' I did kill the Black Dahlia. They couldn't prove it now. They can't talk to my secretary anymore because she's dead."

There's not much information about the secretary he's referencing, or the circumstances of her death, but DuJour reported in the same piece that Ruth Spaulding, a secretary at his clinic, was found dead of an overdose in 1945.

According to The Guardian, George was one of six suspects in the Black Dahlia murder, but to this day, the case remains unsolved. However, Hodel's son Steve has repeatedly and publicly asserted that he believes his father was involved in the killing. Steve is a retired police officer who began investigating the homicides independently, and even wrote a book called Black Dahlia Avenger detailing his beliefs. He maintains a website with updated news about his investigation, and has also alleged that his father murdered more than one women, which he refers to on the site as The Los Angeles Lone Woman Murders. However, Hodel was never officially investigated for any other killings.

Though inspired by Fauna's 2008 memoir, One Day She'll Darken: The Mysterious Beginnings of Fauna Hodel, I Am The Night takes some creative liberties when telling its story (for example, the addition of Pine's fictional character, reported Jay Singletary). Still, the show is rooted in real history, and that's not the only personal connection at work behind the scenes. Per The Hollywood Reporter, Jenkins and her husband Sam Sheridan (who wrote and created I Am The Night) maintained a close friendship with the real-life Fauna from 2008 until her death in 2017. "We tried to honor the truth of her character as much as we could," Jenkins told the New York Times. "Hopefully, her wonderful spirit permeated everything."