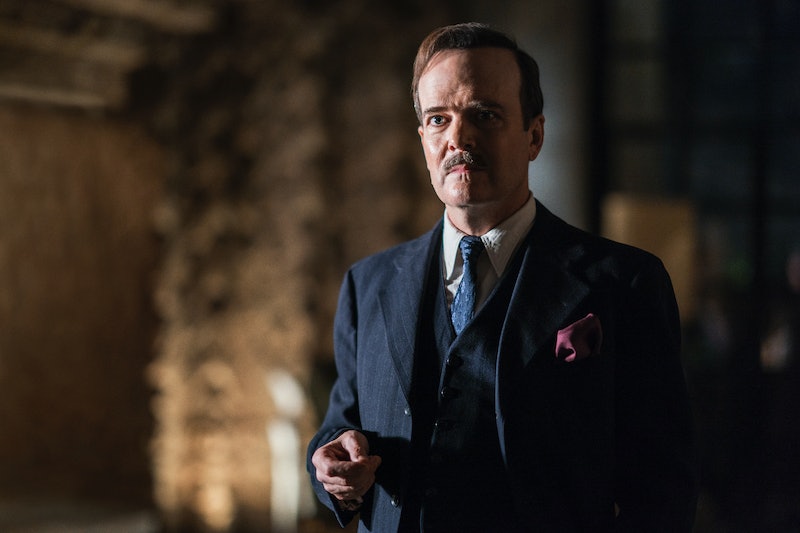 TNT's new thriller, I Am the Night, is based on a true story. And just like the show's protagonist, Fauna, George Hodel was a real person. His son, Steve Hodel, has accused him of being the Black Dahlia killer — a theory the show embraces — but as viewers will soon learn, George's alleged connection to the unsolved 1947 murder is just the tip of the iceberg when it comes to his backstory.

Inspired by Fauna's own 2008 memoir, I Am the Night follows her character as a young woman. After learning she was adopted and has family in Los Angeles, she heads to California to track them down. There, she comes into contact with Jay Singletary (Chris Pine), a reporter who ruined his career after becoming fixated on the Black Dahlia case. As the show's official description reads, "Together they follow a sinister trail that swirls ever closer to an infamous Los Angeles gynecologist, Dr. George Hodel (Jefferson Mays), a man involved in some of Hollywood's darkest debauchery, and possibly, its most infamous unsolved crime."

According to The Hollywood Reporter, I Am the Night director Patty Jenkins and her husband, Sam Sheridan (who created and wrote the show), were personal friends with Fauna until she died in 2017. After her passing, the couple was inspired to bring Fauna's story — and that of her grandfather George — to life in I Am the Night.

Per DuJour magazine — who interviewed Tamar, Fauna's mom and Dr. Hodel's daughter, in 2015 — George was a child "prodigy" who began attending the California Institute of Technology at only 14. The outlet further reports that he began working for the Los Angeles Board of Health in 1938 with a focus on venereal disease, but that he also allegedly performed secret abortions.

The doctor had some famous friends, including Surrealist artist Man Ray and director John Huston (father of actors Anjelica and Danny Huston). According to DuJour, George actually married Huston's first wife, Dorothy, after the two divorced. It was in 1945 that George bought the famous Franklin House, aka the Sowden House, per Curbed, and according to he and Dorothy's son Steve, they lived there until 1950. The exterior of this unique building, designed by Lloyd Wright, is featured in I Am the Night.

Hodel died in 1999 and was never convicted of the Black Dahlia murder, but his son Steve, a retired detective, has said he believes his father killed Elizabeth Short, aka the Black Dahlia. As The Guardian reported, Steve didn't begin to investigate his father's alleged involvement until after his death, but with the help of a Los Angeles Times reporter, Steve got access to the files of one of the original officers who worked on the case. According to that file, The Guardian continues, the LAPD had six suspects and George was one of them.

Per the University of North Carolina, George's aforementioned daughter, Tamar, had previously accused him of sexually abusing her, and though he was ultimately acquitted on charges of incest, the trial did lead police to bug his home in 1950. The Guardian further reports that transcripts of recordings obtained during this time were included in the file Steve uncovered, and that in one, George reportedly said, "Supposin' I did kill the Black Dahlia. They couldn't prove it now. They can't talk to my secretary any more because she's dead." As Steve wrote in his 2003 book Black Dahlia Avenger, he believes his father killed more than one woman. Along with Short, Steve claims that Hodel murdered anywhere from seven to 20 women between the years 1943 and 1949, which he refers to as the Los Angeles Lone Woman Murders.

While I Am the Night may present these accusations as fact, it's important to remember this is all speculation. For example, The Washington Post reviewed Steve's Black Dahlia Avenger book in 2003 and questioned Tamar's credibility. According to The Washington Post, Tamar had accused 19 men of sexual assault — including younger men in the neighborhood, her own father, and Huston — while she lived at the Franklin House in 1949. During Hodel's trial, Tamar's mother testified that her daughter was a pathological liar. However, her half-brother Steve alleged that unspeakable and inappropriate things occurred at the Franklin Avenue home, including promiscuous sex and drug use.

Since George died two decades ago, the truth surrounding these allegations remain murky, but you can see why he's remembered as a controversial figure. See how I Am The Night interprets his life when it premieres Jan. 28.

More like this
Here's What Jeffrey Dahmer's Dad Has Said About His Other Son, David
By Grace Wehniainen
Where Is Lionel Dahmer Today? Jeffrey Dahmer’s Father Reflected On The Serial Killer’s Death In 2020
By Brad Witter
Glenda Cleveland Died 2 Decades After Trying To Turn In Neighbor Jeffrey Dahmer
By Brad Witter
Alleged Cult Leader Larry Ray Is Awaiting Sentencing Following His Conviction
By Brad Witter
Get Even More From Bustle — Sign Up For The Newsletter