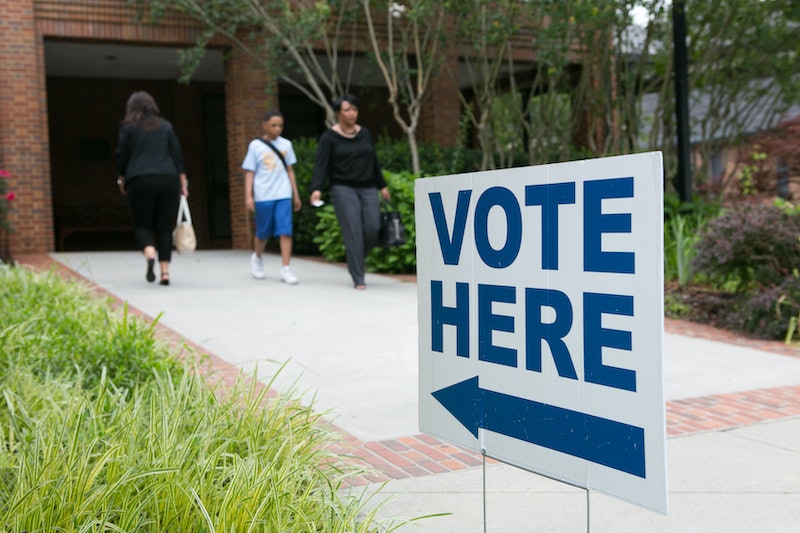 When it comes time to choose Georgia's next governor later this year, some voters may be forced to drive up to 30 miles round trip in order to cast their ballot. That's because one Georgia county plans to close polling places in areas where up to 97 percent of voters are black, Slate reports. Making it harder for black residents to vote in November's competitive gubernatorial race could negatively impact Democrat Stacey Abrams' bid to become the first black woman governor in America.

"This issue is extremely personal for me," Abrams wrote in statement this week. "I grew up hearing my parents’ stories about how they had to fight for their right to vote in the Jim Crow South."

The Randolph County officials trying to close seven of the county's nine polling places claimed last week that the sites weren't in compliance with the Americans With Disabilities Act, which requires that polling places be accessible for people with disabilities. However, Sam Levine at HuffPost reports that no evidence suggests the polling places aren't accessible.

“There is no document, report or analysis studying the handicap accessibility of polling places in Randolph County and the cost of fixing them" within the past year, a lawyer for the country said in an email to HuffPost.

Roughly 7,000 people live in Randolph County. More than 60 percent of residents are black, and 30 percent live below the poverty line, per the 2017 U.S. Census. The county has also historically voted for Democrats in both state and federal elections, according to recent data compiled by Politico. Because of the county's voting history, it would benefit Republicans to close polling places in the area, thus forcing prospective voters to travel much further on election day (a challenging task for low-income people without a car).

Abrams' opponent, Republican Brian Kemp, has previously been accused of working to suppress voter rights during his tenure as Georgia's secretary of state, including reportedly purging minorities from voter rolls, The New York Times reported in 2016.

"Hackable polling machines, voter roll purges, refusing to register voters until after an election, the use of investigations to intimidate groups registering minorities to vote — Mr. Kemp knows it all," Carol Anderson, professor of African-American studies at Emory University, wrote in a New York Times op-ed last week.

Kemp did publicly oppose closing the Randolph County polling places after the news gained negative attention, however. The American Civil Liberties Union of Georgia did as well, but took a much stronger stance in a letter it sent to the Randolph County Board of Elections and Registration earlier this month urging it to keep the sites open.

“This proposal is reminiscent of Georgia’s ugly, discriminatory past, and that is where it needs to stay,” Andrea Young, executive director of the ACLU of Georgia, said in a statement. “We will fight to protect every Georgian’s right to exercise their sacred, constitutional right to vote in every election.”

Although Randolph County represents a small fraction of Georgia voters, closing 78 percent of its voting polls would disproportionately impact poor black voters. And if the practice becomes more widespread, Democrats would face a major obstacle in what's already an uphill battle to flip the governor's mansion.

More like this
Joe Lycett Just Took HIs David Beckham Qatar Protest To A Whole New Level
By Sophie McEvoy
Iran Has Issued A Death Sentence Over Mahsa Amini Protests
By Catharina Cheung, Darshita Goyal and Maxine Harrison
What To Know About Martin Bashir After Watching 'The Crown'
By Bustle UK
Footballer Jake Daniels Shared His Thoughts On A World Cup Boycott
By Sam Ramsden
Get Even More From Bustle — Sign Up For The Newsletter