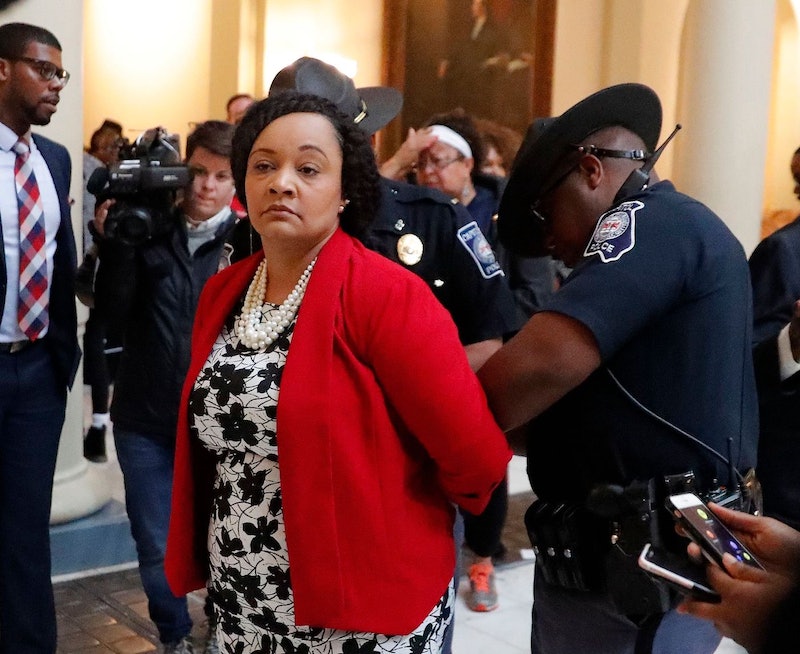 Protesters at the Georgia State Capitol on Tuesday called for all ballots to be counted in the state — where the governor's race remains contested — until some of protesters were arrested by authorities. The key word here, though, is "some." Georgia state Sen. Nikema Williams was arrested, even though state Rep. David Dreyer wasn't. Afterwards, Dreyer spoke out about the reason he saw for this discrepancy: she is black and he is white.

Williams said she was arrested after the crowd of protesters was told to disperse. But that's not how she saw it. "I stood peacefully next to my constituents because they wanted their voices to be heard, and now I’m being arrested," Williams told reporters.

After Williams was detained, Dreyer, one of her colleagues in the state legislature, told reporters he was with protesters at the same time as Williams with the hope of getting the police officers to deescalate so that they could "continue to express [them]selves."

That didn't work, though, and some protesters, including Williams were arrested. "For some reason, Sen. Williams was treated differently than I was," Dreyer told reporters. When asked what that reason was, Dreyer said:

That explanation matches what Williams said was the reason for the discrepancy. She added that she had lots of time to reflect on what happened while she was detained. "I joined them down on the floor, and I was singled out as a black female senator standing in the rotunda with constituents in the capitol in a body that I serve in," Williams told reporters after she was released.

One of the reasons she wasn't released earlier, Dreyer said, was that Williams and the other protesters were charged on "state charges," not simply with citations. That limited a judge's ability to release her. He also said that she had been left in a van for a very long time on a cold and windy day.

Generally, Dreyer spoke of the authorities' overreaction. "For some reason, I saw Capitol police lined up three abreast, row after row after row, looking like they were trying to stop a riot, when we were standing up for people’s right to vote," Dreyer also told reporters while Williams was detained. "So this is not democracy; this looks a lot more like an authoritarian government. And it seems like that’s happening a lot these days, doesn’t it?"

Dreyer was not the only member of the legislature to speak out. "When a sitting senator, who is the vice chair of the state Democratic Party, is thrown into a paddy wagon at the state capitol it is a stark reminder that our right to freely assemble is at risk," state Sen. Nan Orrock told The Atlanta Journal-Constitution.

Williams does not regret her actions. "I am incredibly proud and will continue to stand with the citizens of Georgia to demand that their votes be counted," she told reporters after being released.

As for the election, a judge ruled the results can't be certified before Friday.