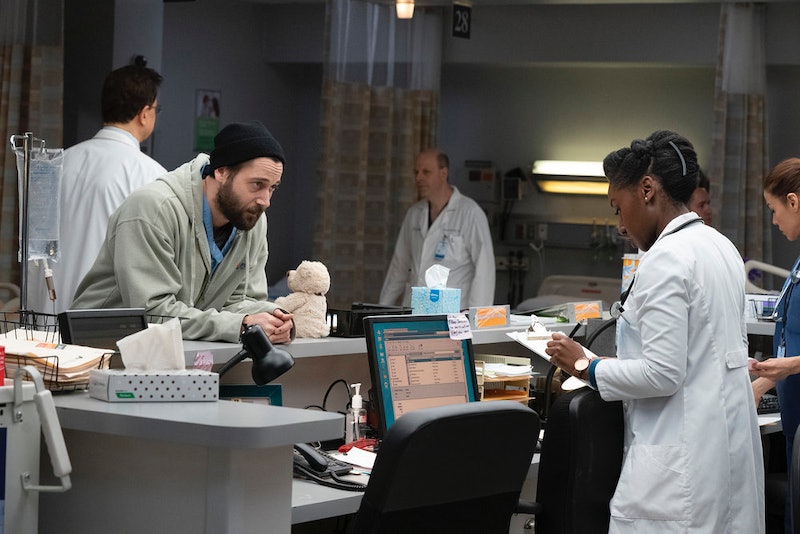 New Amsterdam Season 1 ended with an ambulance crash and the possibility of multiple fan-favorite casualties on the show. Now that Season 2 is here, fans will finally have some answers, but that doesn't meant they're necessarily going to like them. It turns out that it was Georgia, Max's wife, who died in the New Amsterdam Season 1 finale and it's so, so sad.

It was anyone’s guess as to who succumbed to their injuries following that ambulance crash. Really, anyone — even the cast. At the end of Season 1, executive producer Peter Horton told TV Line that the actors on the show didn’t know that Georgia wouldn't make it through the crash.

“To be fair, more than one person dies. You have seen the lawyer who stole the ambulance, he’s clearly dead,” executive producer David Schulner added. “One of our key cast is [also] dead, and that’s the question for the hiatus.” It wasn't just a question for the hiatus; the writers kept fans guessing as to who it could have been almost the entire way through the Season 2 premiere.

Every time you were sure that you should start mourning someone, the writers revealed that they had been saved, forcing a fan to move onto their next theory, only to have that debunked as well.

Season 2 opens up months after the crash, showing how Max is moving on after the crash, interspersed with flashbacks to the night of the trauma. In the opening scene, he and Georgia are singing to baby Luna and all seems right in the world. So, it wasn't her! Must have been Sharpe.

Helen was in the ambulance in Season 1, and, after seeing Max speaking to Dr. Castillo and not Helen about his treatment, it would have been easy to assume she died. But New Amsterdam’s best cancer doctor was actually off doing speaking engagements and raising money for the groundbreaking treatments that saved Max’s life.

Lauren was thrown from the ambulance following the crash, and the last that viewers saw of her in Season 1 was her, lying on the ground, severely injured and unconscious. But she walked into (albeit with a cane from her injuries) her emergency room toward the end of the episode, ready to resume work, with Floyd telling her that he “got her” and kept her ER waiting for her. So it had to be Georgia, who Max is apparently hallucinating.

Just when Max’s cancer is cured and his baby is born, he loses his wife. He’ll have a lot to process in the coming months, as will the other characters, Schulner told the New York Post. “I think the trajectory of this season is about grief and recovery. The [ambulance] accident … has forced each character to re-evaluate their lives — even for characters who weren’t directly involved in the crash,” he said. “Every character is going to have a ‘Come to Jesus’ moment, for lack of a better phrase, with the aftermath of the accident.”

Georgia’s death will be something that everyone on New Amsterdam has to work through, and if the season premiere is an indication, it will be in surprising and tense ways.