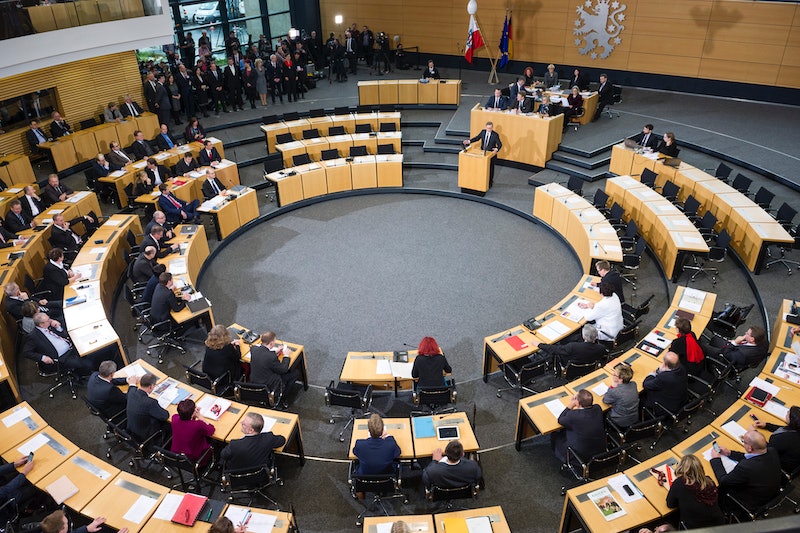 Earlier this week, German lawmaker Madeleine Henfling showed up at the state parliament of Thuringia in east-central Germany to cast a vote in the plenary hall. However, Henfling was quickly kicked out of parliament because she had her baby with her, CNN reported, despite there being no official rule in Thuringia banning babies and children from being inside the building.

On Wednesday, Henfling — a member of the Green Party in Germany — tried to vote while carrying her son, who is only six weeks old, in a baby sling. According to CNN, the session was then put on hold for 30 minutes while members of parliament discussed the child's presence. In a move that has sparked swift backlash across Germany, Thuringia's state parliament president, Christian Carius, ultimately told Henfling that procedural rules prohibited babies from being inside the plenary hall. That is not strictly true, German broadcaster Deutsche Welle reported, but the state parliament president has the authority to approve or deny visitor requests, and in the case of Henfling's son, Carius chose not to approve.

"I simply wanted to take part in the vote," Henfling told Deutsche Welle. "The parliamentary president could have agreed. ... I feel like a second-class parliamentarian just because I have a child to take care of."

"I didn't think that President Carius would lay in that hard and argue about child welfare," Henfling added. "That's pretty harsh."

Carius also told Henfling that parliamentarians should find suitable child care options for "reasons of child protection," but as Deutsche Welle and CNN both pointed out, the state parliament building in Thuringia does not currently offer any child care services for lawmakers and their children. According to The Washington Post, members of the far-right Alternative for Germany party and of the conservative Christian Democratic Union party — to which German Chancellor Angela Merkel belongs — applauded Henfling's forced departure.

Nonetheless, Henfling returned to the state parliament on Thursday with her son. This time, however, she brought her mother with her — an option she did not have the previous day, she told Deutsche Welle, because her mother hadn't been available. But asking her mother or other people to take care of her son during votes isn't a "sustainable solution," Henfling told The Washington Post, and she and the Green Party are considering taking this case to court. Henfling also suggested to CNN that Carius did not understand her position as a mother:

It's a typical old man's thinking. I know a lot of men who think differently than this. But for someone to say: You should just give your 6-week-child to a babysitter, especially if you are still breastfeeding them, that's just not reality. Not for a mother. He doesn't know what problems you have with a child. The easiest thing is really to take the child with you at this age because they sleep all the time.

A few years ago, Save the Children included Germany in its list of best countries for mothers in terms of maternity leave policies, representation of women in parliament, and minimal maternal death rates. Germany also offers a relatively generous family leave program, according to Business Insider. Mothers can take a year of family leave after giving birth, with roughly 60 percent of their last pay — and an additional two years after that, though without the extra money. Despite these protections for mothers, however, those who came to Henfling's defense have made it clear that there is still quite a bit of work to be done in Germany in order to achieve genuine equality.