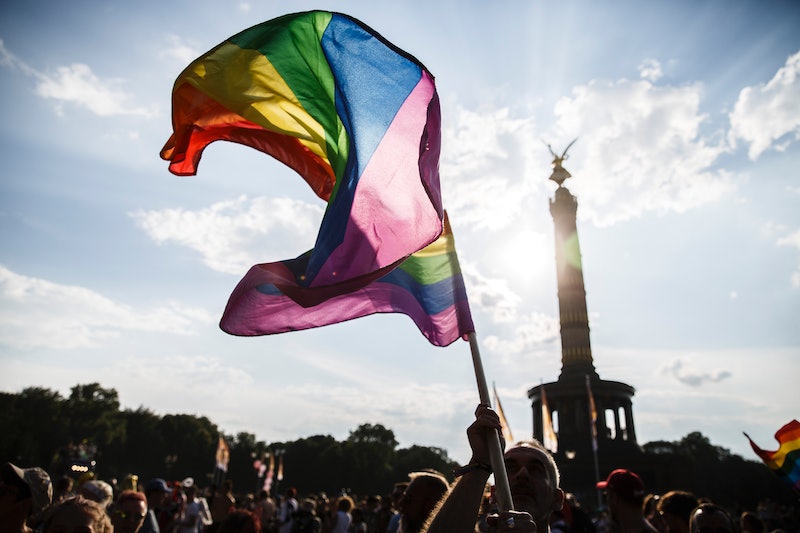 In 2013, an intersex person in Germany launched a legal challenge to be allowed to change their gender in the country's birth registry. A little more than five years later, Germany's third gender law is going into effect, making it the first country in the European Union to offer a "third gender" option on birth certificates.

According to German broadcaster Deutsche Welle, roughly 80,000 people in Germany are intersex. Starting this year, they — along with parents of intersex babies — will be able to select a "divers" classification on birth certificates.

Since 2013, parents of intersex children have had the option to leave the gender box on birth certificates blank. This will remain an option under Germany's new law, CNN reported, but the country's top court ruled last year that this was not enough. In November 2017, Germany's constitutional court ruled that lawmakers must recognize a third sex from birth, arguing that providing only the binary "male" and "female" options is unconstitutional.

Lawmakers subsequently had until the end of 2018 to decide on what a third option would be, and to implement the necessary changes. As Business Insider pointed out, this ruling primarily affects intersex people in Germany — and not transgender people — because it is allowing people to select a nonbinary sex classification, rather than gender. As a result, LGBTQ rights advocates have called on Germany's new law to be more inclusive, according to CNN.

According to VICE, Germany's third gender law currently requires physicians to certify "gender variations" in order for a person to change their gender classification in the birth registry. Activists have called for this medical approval clause to be removed for several reasons. Intersex people have historically been subject to unnecessary and traumatic medical interventions, and requiring medical approval also prevents the third gender law from being more inclusive of transgender and nonbinary people who don't identify as men or women.

Advocates are nonetheless hopeful that the new law will create more visibility outside the gender binary and that it will serve as a first step to more inclusive gender laws, CNN reported. German advocacy group Dritte Option — translated as "Third Option" — has campaigned for a third gender option to be introduced on birth certificates, passports, and other official documents for years. According to Dritte Option's website, they supported this initiative "to create space and visibility for all genders."

Although Germany is the only country in the European Union to implement such a law so far, other European countries — Denmark, Malta, Ireland, Belgium, Portugal, and Norway — currently offer transgender individuals the option to retroactively change their gender markers on their birth certificates, although they do not have a third gender option on other official documents. Countries outside Europe, however — such as Australia, New Zealand, Canada, India, and Nepal — already have legislation in place similar to Germany's new gender law.

Advocates have heralded Germany's new law as progress, but are urging the country to go further by abolishing gender registration altogether, in order to be more inclusive of all genders and gender identities. They see the new law, which went into effect on Tuesday, as a first step toward that goal.