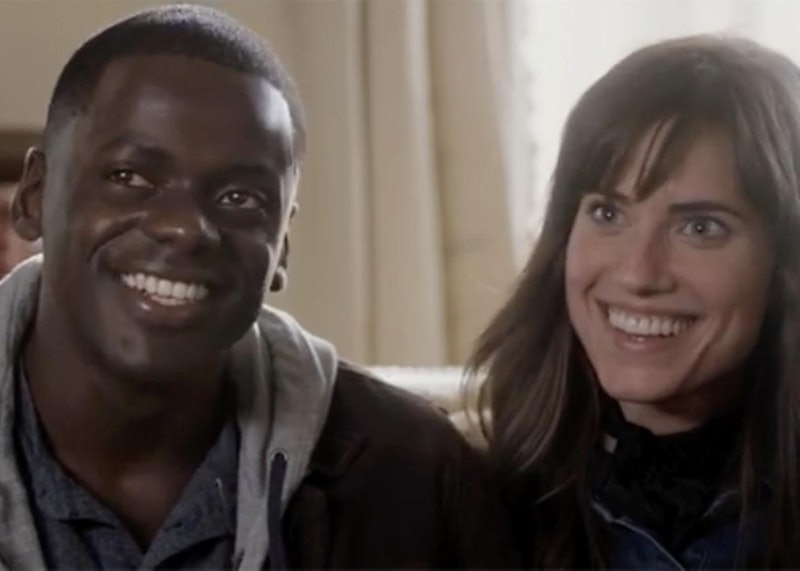 When the first trailer for Jordan Peele's horror film Get Out dropped many months ago, it was apparent the film would pack a powerful punch. Incepted from one half of the talented comedic duo Key and Peele, Get Out isn't a comedy at all, but instead focuses on a black man's oh-so terrifying weekend away at his white girlfriend's Stepford-like family estate. The film brilliantly serves as both an effective horror film and a social commentary on race. When I sit down with the film's (newly blonde) co-star Allison Williams during the film's Los Angeles junket in Beverly Hills, she makes it clear that this film is a movie with a particular message that we need today.

"It is subversive, it deals with race, it’s so modern and topical," Williams says, pulling her knees up onto a white leather chair. "When this script came along I was like, 'This is exactly what I’ve been waiting for. This needs to be made now.'"

Of course, as two white women having a conversation about race, we walk a strange, delicate line. Neither Williams nor myself have ever experienced what it's like to be a black man living in America, and we never will. But Peele's Get Out, opening Feb. 24, helps us — if just for the 103 minute run time — imagine what it would be like under the specific circumstances the film creates.

"I think horror really, unlike any other genre, puts you in the shoes of the protagonist because you’re aligned to them in their survival," the Girls star says. "The act of [making] the protagonist a black man subverts the typical, embarrassing trope of the black guy dying first in horror movies."

She makes a valid point: Killing the black character first — if not by the end of the third act — in horror films is an unfortunate trope that has persisted for decades. Peele turns this on its head by making his protagonist — the one character viewers are supposed to empathize with — a person of color.

"The audience is expected to feel what he’s feeling. It gives the audience a kind of a tutorial of what it would feel like, maybe, to be a black man in this situation," the 28-year-old says.

Because the film feels so relevant, Williams admits that she momentarily worried the film wouldn't come out in time, while shooting the picture over a year ago. "I talked to Jordan multiple times since we wrapped and I was like, 'I wish it was coming out now. I wish it was coming out now.' And he just kept saying, 'It will still be relevant in February.' Which is so sad and so true."

Sad, indeed. The inequality found in America in 2017 is still startling. According to a Pew Research Center Study from 2016, 4 in 10 black people are doubtful the United States will ever have racial equality. The same study reports that 4 in 10 white people think racial equality will eventually happen in America. Additionally, about the same amount of white people — 38 percent — say enough changes have already been made.

Clearly, this film takes aim at the latter statistics.

"My hope is that having a room full of strangers go through this together will help improve awareness [for] people [who] don’t always talk about these issues," Williams says. "Because it’s not easy to talk about until you just start talking about it and then it’s not so scary. But, as Jordan said, our way of talking about race is broken, so why not try an avenue to get people to talk about it?"

Get Out, as Williams and Peele have said again and again on their press tour, is indeed a film we need to experience now. It's a unique exploration of a contemporary interracial relationship, an eye-opening look at the subtle (and not so subtle) racism people of color face constantly, and at the end of the day — it's also a damn good horror film.

More like this
Michelle Williams Laughs Often About Motherhood Thanks To 'The Fabelmans'
By Marina Watts
'Wakanda Forever' Is Already Opening Doors For Mabel Cadena
By Grace Wehniainen
Emma Corrin Spoke Out Against “Clickbait” Headlines Surrounding Gender Conversations
By El Hunt
In 'The White Lotus,' Leo Woodall Gets His Moment
By Gabrielle Bondi
Get Even More From Bustle — Sign Up For The Newsletter