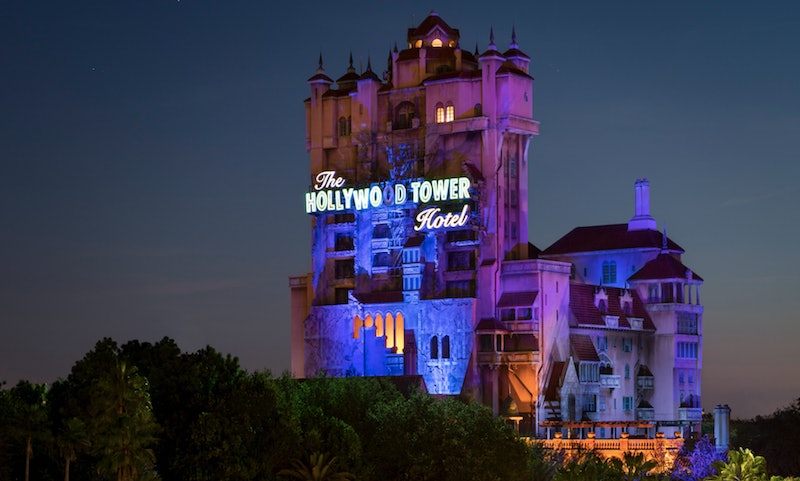 I don’t generally have any regrets about my own wedding, but to be perfectly honest, a small and somewhat absurd part of me is currently wondering in a very tiny voice, “…Why the heck didn’t we get married at the Tower of Terror???”

I discovered this delightful surprise while perusing the Disney Fairy Tale Weddings And Honeymoons website the other day in search of additional information about the new Coronado Springs resort wedding venues at Disney World. Although I did know that the Orlando resort — which, with four theme parks, two water parks, and 25 resort hotels, among other entertainment offerings, is by far the largest Disney park resort — has quite a few different venues available for ceremonies, receptions, rehearsal dinners, and other wedding-related festivities, I was somewhat surprised to find that the total number of venues on the property is a whopping 48 — and as I was scrolling through the full listing of venues on the Disney Weddings website, my heart pretty much stopped the moment I saw one labeled, “TOWER OF TERROR COURTYARD.”

I love the Tower of Terror. The theming. The level of detail in the environment. The storytelling. It is glorious. And the idea of using as a wedding venue? That is even better.

Designed to put riders directly inside an episode of the cult classic (and also longtime favorite of yours truly) television show The Twilight Zone, the Tower of Terror is set inside the dilapidated remains of the Hollywood Tower Hotel. According to the ride’s lore, the hotel was once the pinnacle of luxury during Hollywood’s Golden Age — until one night in 1939. While a vicious storm raged outside, five people — a celebrity couple, a child star, the child’s nanny, and a bellhop — stepped inside the hotel’s elevator, only to fall victim to a lightning strike. When the lightning hit the elevator, it caused the elevator to plummet… and also an entire wing of the hotel, along with the five people inside the elevator, to vanish. Lost forever, they now wander a dimension somewhere between our world and the next — a dimension known as… the Twilight Zone.

Riders of the Tower of Terror wend their way through the long-abandoned hotel lobby, have the backstory explained to them by Twilight Zone creator Rod Serling in the hotel's library, and then take a ride in one of the Hollywood Tower Hotel’s old service elevators. In many ways, it's a standard drop tower ride — but the theming and storytelling of this one is truly astonishing. The Florida version, which is located inside the Hollywood Studios park, was the first version of the ride to open, way back in 1994 — and although the Tower of Terror does exist in many of the other Disney parks (many of which I’ve been lucky enough to ride at some point), none of these other versions have ever quite lived up to the original for me.

As such, you can imagine why I might be somewhat disappointed in myself for not having discovered much, much sooner — as in, when my spouse and I were planning our own wedding several years ago — that the courtyard in front of the “Hollywood Tower Hotel” at Hollywood Studios is absolutely a place where you can exchange your vows.

According to the venue’s page on the Disney Fairy Tale Weddings And Honeymoons website, the Tower of Terror Courtyard is available as a ceremony venue if you book the Wishes wedding package — the most expensive package Disney Weddings offers, with a high degree of customizability and the price tag to match. (Wishes wedding start at $12,000, but they can easily run north of $50,000; heck, if you really pull out all the stops, they can be $100,000 or more, according to a Washington Post report from 2017.) The courtyard can accommodate between 10 and 100 guests for ceremonies schedule to begin one and a half hours after the Hollywood Studios park closes for the day.

The best part about the whole thing is that the Disney Weddings website listing makes almost no mention of the spook factor inherent in using the Tower of Terror as your wedding locale. Instead, it positions the space as a way to amp up an “Old Hollywood Glamour” theme: According to the listing, the venue will “transport [you] back in time to the 1930s, the ‘Golden Age of Hollywood,” with the “towering hotel and the hanging chandelier [illuminating] the timeless courtyard” while the “lush greenery and vibrant flowers that surround the space create an intimate environment for your ceremony.”

The proverbial icing on the (wedding) cake, though, is the caption for both photos in the gallery. It reads, “Say ‘I do’ in front of the Hollywood Tower Hotel that’s the perfect backdrop for your nuptials.” It is completely un-ironic in tone, and I love it. Yes, do say “I do” in front of a GIANT TOWER OF DEATH said to be responsible for dooming five innocent souls to an eternity of torment! That is, in fact, the perfect backdrop for my nuptials! How did you know that’s exactly what I was looking for???

I will give the listing this, though: The single, solitary nod to the ride itself — beyond the use of the word “transport” in the whole “transport you back in time” concept, which I suppose you could make the argument for being a reference to the fate of the Tower of Terror’s victims (they were, after all, transported to the Twilight Zone by that lightning strike) — describes the venue as “a sophisticated backdrop for your wedding ceremony that will completely immerse you and your guests into a different dimension.”

Get it? Because the Twilight Zone is another dimension? A dimension not only of sight and sound, but of the mind?

According to Carrie Hayward, who has written extensively about what goes into planning Disney weddings and events on her websites, Disney Travel Babble and Carrie Hayward’s Fairytale Weddings Guide, and runs the Disney Wedding Podcast, the Tower of Terror has three areas of varying sizes that can be booked for these kinds of events: The Small Terrace, which can host 10 people for dinners and 15 people for receptions; the Large Terrace, which has a capacity of 30 for dinners to 45 people for receptions; and the Courtyard — the same space used for ceremonies coordinated via Disney Weddings — can hold between 72 for dinners and 100 people for receptions. (Note that Disney weddings typically involve booking separate venues for ceremonies and receptions, so you may not be able to have both your ceremony and your reception at the Tower of Terror Courtyard.)

It’ll cost you, though. Back in 2011, when Hayward wrote a detailed post explaining how she had planned an anniversary dinner party on one the Tower of Terror’s terraces, pricing included a $500 venue rental fee for either terrace or a $2,000 venue rental fee for the Courtyard, as well as food and beverage minimums of $1,500 for the Small Terrace, $4,500 for the Large Terrace, and $3,00 for the Courtyard. You can even buy out the ride itself on top of these fees if you like; in 2014, the price for doing so was an additional $6,600, per the DisBoards forums. But all of these prices have undoubtedly gone up in the intervening years, so you’ll need to get in touch with the Disney Events Group for updated costs.

The results looked phenomenal, though — you can see photos from Hayward’s dinner here — so if you have the sort of disposable income required for an event of this magnitude (and, of course, spooky things/old Hollywood glamour are your jam), you… probably won’t regret it.

If you’re interested in planning a wedding or other event at the Tower of Terror, you can reach out to Disney for more info via either the Disney Fairy Tale Weddings And Honeymoons service or the Disney Event Group. Just try not to get stuck in another dimension, OK?