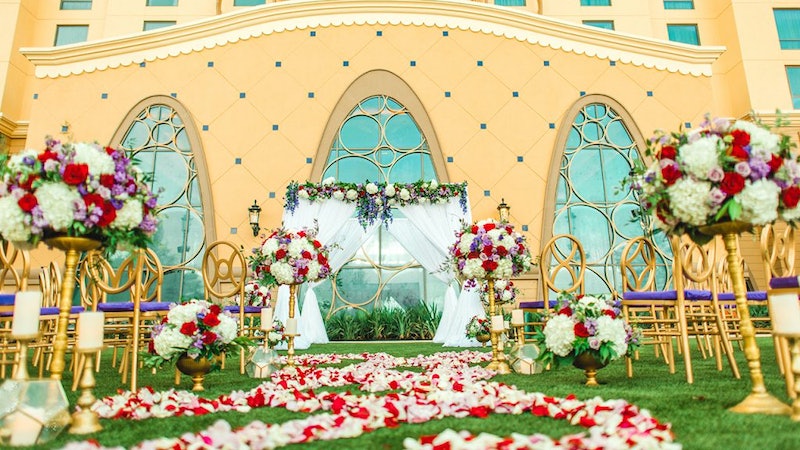 If you’ve always dreamed of having a Disney wedding, I have some excellent news for you: A bunch of new wedding venues just opened at Walt Disney World, according to the Disney Parks Blog. Based at the Orlando theme park mecca’s Coronado Springs resort hotel, the four new venue options range from the grand and very public to the intimate and private — and if you’ve been hoping to check out the newly-refurbished Coronado Springs and its brand new Gran Destino Tower, now you can do that and get married all in one go. A dream is a wish your heart makes, right?

Coronado Springs originally opened in 1997 as the first Disney World convention center resort priced in the “Moderate” tier. (The other on-site resorts with full convention centers — the Grand Floridian, the Contemporary, the BoardWalk Inn, and the Yacht and Beach Club — are all in the “Deluxe” pricing tier.) It’s also the largest in terms of its convention facilities’ size; Coronado Springs includes more than 220,000 square feet of flexible meeting and event space, several ball rooms, and exhibit hall, and 45 “dynamic breakout rooms,” according to the Disney Meetings And Events website.

In 2017 — right at its 20-year mark — the resort began undergoing a multi-year expansion and refurbishment, with the guest rooms receiving a refresh, additional restaurants opening up on the property, and most importantly, a whole new section: A 15-story addition called Gran Destino Tower. The expansion project concluded with the opening of Gran Destino Tower in July 2019.

As it turns out, a bunch of new wedding venues opened up with the conclusion of the expansion, too, per the Disney Parks Blog. There are four total, all of which can be used for a variety of different purposes, and three of which can host your actual ceremony. The grandest of the bunch is undoubtedly Destino Plaza; located right at the base of Gran Destino Tower (and pictured up top), you can choose to have either tower or Lago Dorado — the Golden Lake — as your backdrop. Usable for both ceremonies and receptions, it can hold between 10 and 150 people, so whether you want to go big or keep it small, you’re good to go.

Lantana Courtyard, meanwhile, is solely for receptions — but you can use it for rehearsal dinners and farewell brunches in addition to full-on wedding receptions, so it still offers some solid flexibility. Part of the larger Lantana venue, which also features a pre-reception area and indoor reception spaces called the Lantana rooms, it can hold between 10 and 100 people.

Then there’s La Mesa Patio, which is perfect if you’d rather keep your wedding away from the prying eyes of passersby. (Nothing draws attention quite like a Disney wedding.) A private courtyard, the patio is surrounded by palm trees and other greenery and decorated with twinkling lights. Good for ceremonies, receptions, rehearsal dinners, or farewell brunches, it has a capacity of 10 to 140 people — and if you’re feeling extra fancy, you can also reserve the adjacent Monterrey Ballroom and let your guests roam between the two spaces all night long.

And lastly, there’s Casitas Courtyard, a flexible space right in the center of Coronado Springs that can be used for ceremonies, receptions, rehearsal dinners, or farewell brunches. Want an intimate ceremony? Arrange your guests’ chairs in a semi-circle. In the mood for something more traditional? Arrange them in rows and use the fountain located in the space as your backdrop. Notably, this space has the biggest capacity; it fits between 10 and 200 people.

The three venues capable of hosting ceremonies have five possible time slots available ranging from morning to night; you can choose to hold your ceremony at 9:30 a.m., noon, 2:30 p.m., 5 p.m., or 7:30 p.m. Due to the fact that they’re outdoors, all four venues also come with contingency plans in the event of rain or other inclement weather: According to the Disney’s Fairy Tale Weddings And Honeymoons website, a decision about whether to move the event indoors “will be made at least five hours prior to your event.”

It’s worth noting, though, that the new Coronado Springs venues are only available to you if you book the Wishes package — which, of course, is the most expensive Disney World wedding package. This package does come with a ton of bells and whistles the other two packages don’t, including tons of customization options and access to both a Disney Wedding Planner and planning services for your menu, flowers, entertainment, reception décor, and transportation — but depending on how elaborate you want your wedding to be and how many people attend, it can get pretty pricey.

The lowest possible price for a Wishes package wedding, which includes just 10 guests (the minimum for the package) plus the spouses-to-be, is $12,000, according to Disney itself — but they can get much, much higher. Consider, for example, the effect the venue you choose for your ceremony can have on the price tag: Fees for just that venue alone — not including your reception venue! — can range from $4,000 for a resort hotel venue to $50,000 and up for the Magic Kingdom After Hours option.

I mean, if you have that kind of disposable income and money is no object when it comes to your wedding, go for it; if, however, money is an object for you, then just, y’know, be aware that a Disney World Wishes wedding isn’t going to be your most cost-effective option.

There are a whopping 48 ceremony and reception venues scattered throughout Disney World, by the way — so even though which ones are available for you vary based on the package you choose, you’ll have no shortage of options. Want a literal fairy tale wedding? You can do that at Disney. Want a magical elopement with no more than your four favorite people present? You can do that at Disney, too. For more info, check out the Disney Fairy Tale Weddings And Honeymoons website.

More like this
Heinz Just Relaunched A Bean-Tastic '90s Fave
By Sam Ramsden
Are Sagittarius & Sagittarius A Good Match? Astrologers Weigh In
By Kristine Fellizar
The First Trailer For 'That '90s Show' Includes So Many Nods To The Original Series
By Jack Irvin, Alyssa Lapid and Grace Wehniainen
24 Photos Of The 'Love Actually' Cast Then & Now
By Grace Wehniainen
Get Even More From Bustle — Sign Up For The Newsletter