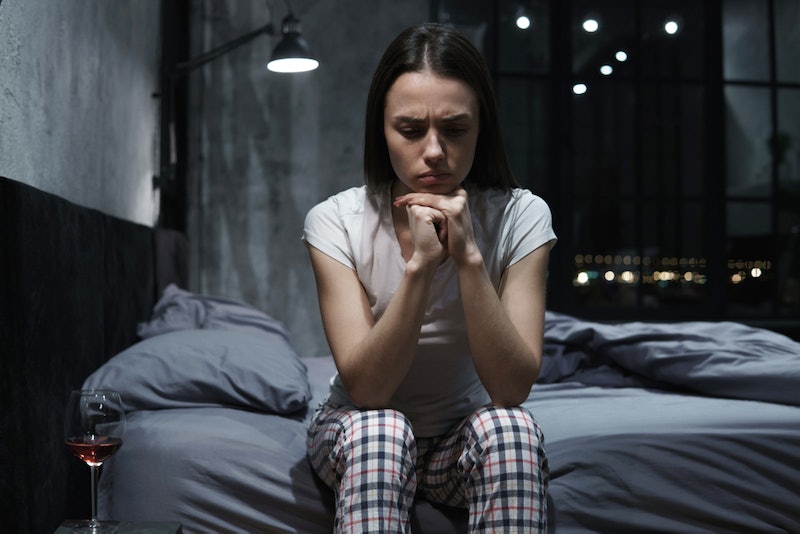 If you frequently find yourself getting up to use the toilet at night, it's likely you're not as well rested as you'd prefer by the time your alarm rolls around. And if you're baffled by the cause — perhaps you've already cut down your evening fluid intake in an effort to resolve the issue — a new study might offer the answer. Scientists in Japan have concluded that evening trips to the toilet could actually be a sign of high blood pressure.

Dr. Satoshi Konno, of the Division of Hypertension in Tohoku Rosai Hospital, Sendai, Japan, said in a press release, "Our study indicates that if you need to urinate in the night — called nocturia — you may have elevated blood pressure and/or excess fluid in your body." Dr. Konno added, "If you continue to have nocturia, ask your doctor to check your blood pressure and salt intake."

To test the association between nocturia and high blood pressure (or hypertension), the researchers carried out a study of 3,749 people. They compared their blood pressure measurements with the results of a questionnaire the participants completed, assessing their evening bathroom habits. The researchers defined nocturia as one or more trips to the bathroom per night.

"We found that getting up in the night to urinate was linked to a 40 per cent greater chance of having hypertension," Dr. Konno said. "And the more visits to the toilet, the greater the risk of hypertension."

However, the study did not "prove a causal relationship between nocturia and hypertension"; moreover, the findings might not be applicable outside of Japan. Dr. Konno added, "The relationship may be influenced by various factors including lifestyle, salt intake, ethnicity, and genetic background."

What's more, high blood pressure isn't the only health issue associated with a need to urinate at night, and you needn't rush to conclude you have hypertension because you're experiencing nocturia. According to the Cleveland Clinic, other issues like sleep disorders — particularly obstructive sleep apnea — could be to blame, or it could be down to the medication or supplements you're taking (excessive vitamin D can cause frequent urination). The Mayo Clinic notes that urinary tract infections (UTIs) can also increase your need to go to the toilet.

Alternatively — and this might shock you — your nightly bathroom sojourns could simply be the result of drinking too much before bed. Alcohol, coffee, and other caffeinated beverages are especially likely to result in nocturia, the Cleveland Clinic says.

The National Sleep Foundation recommends consulting a doctor if you're getting up two or more times a night to go to the toilet, since you're unlikely to be getting an adequate amount of rest. Keeping a record of how often you use the toilet at night might be helpful, the nonprofit suggests. Your doctor might ask for a urine sample, and could run a test on your bladder.

On the other hand, if you've got a nightly habit of necking a cold brew at 10 p.m., you might just consider giving that up.