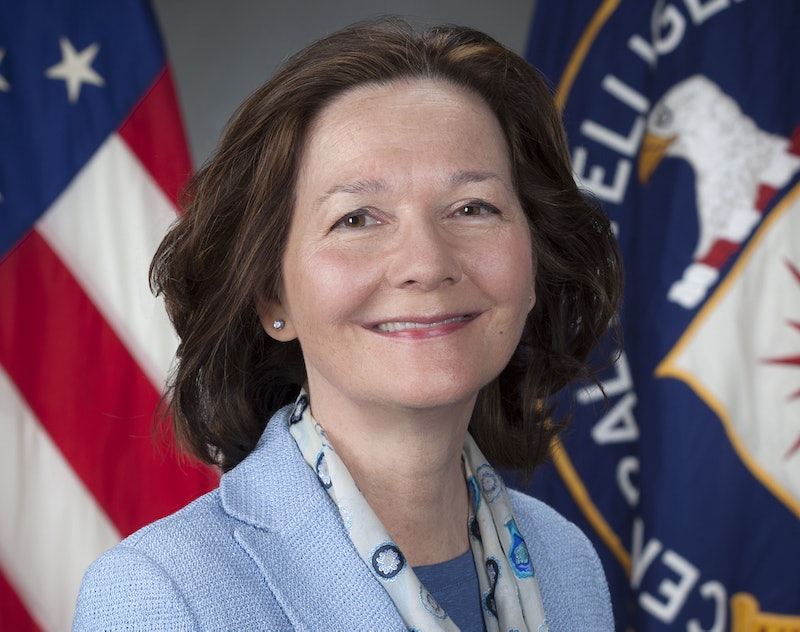 If approved, Trump's nominee for CIA director would become the first woman to head up the nation's foremost intelligence agency. However, her appointment has some worried because of her history at the organization. Incoming CIA director Gina Haspel has a nickname that draws on the exact red flags that critics have noted about her.

Former CIA counterterrorism officer John Kiriakou recently wrote a piece in The Washington Post describing how "enhanced interrogation techniques" were used by the CIA. (Notably, the former officer had been imprisoned, in part because of his role in revealing that the CIA had engaged in acts of torture on terrorism suspects.) In his piece, Kiriakou discussed his experience with torture at the CIA — and about how Haspel was involved. According to Kiriakou, he and others in the agency referred to her as "Bloody Gina," a nod to her work in the CIA's "torture program."

Haspel has worked at the CIA for over three decades, but human rights advocates are disturbed that she's now been tapped for the position at the head of the agency because that work has involved, among other things, heading up one of the CIA's "black site" prisons.

The "black site" prisons were secret overseas sites used for torturing suspects in order to gain information, whose locations spanned eight countries and were kept hidden from everyone except the president and a small number of other high-ranking officials. Once information about them became public, a Senate Intelligence Committee investigation into the subject found that the torture techniques used were not effective in gaining information and that the decisions that led to the creation of these prisons amounted to a series of "terrible mistakes."

Now, some of the senators involved in that investigation have come out strongly against Haspel's nomination. Sen. Dianne Feinstein published an open letter on Twitter calling for the details surrounding Haspel's work to be declassified because of her involvement in "one of the darkest chapters in American history." Sen. Rand Paul made his opposition to her appointment very clear, tweeting: "I'll do whatever it takes, including filibuster, to stop the nomination of Gina Haspel."

So far, it's been very unclear what exactly Haspel was involved in. The current reporting, summed up by BuzzFeed, is that she definitely oversaw a black site prison located in Thailand and that at least one prisoner was tortured during her time overseeing the prison. She was not personally involved in the torture, though, and her supporters, including former CIA director John Brennan, note that the Justice Department had approved the use of "enhanced interrogation techniques," a phrase that it later became clear referring to torture. Buzzfeed also reports that she was part of a move that ended up destroying dozens of video tapes showing suspects being tortured, although CIA officials who later investigated that process cleared her of any wrongdoing in the case.

Because of this lack of transparency, civil rights groups have joined Sen. Feinstein in claiming that the only way for the Senate to fairly judge whether or not she is qualified to head up the CIA is for her career history with the agency to be released.

Another lingering question surrounding her appointment is the fact that her involvement in the black site prison likely violated international laws surrounding the treatment of prisoners. German officials have even filed a warrant for Haspel's arrest if she traveled to Europe because of her alleged involvement in torture, which would certainly end up being problematic for a potential CIA director.

Going back to her nickname, there's no telling exactly where it came from until her work history is declassified, and perhaps not even then. Nicknames are not a reliable way to judge a person and their history — however, it's less common that they come out of nowhere.