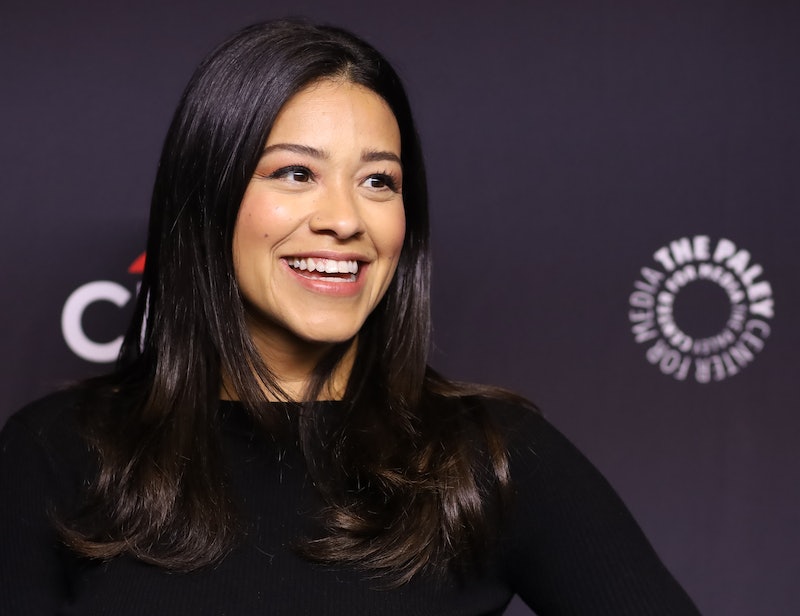 During a mental health discussion at the Kennedy Forum, audiences learned that Gina Rodriguez stopped filming Jane the Virgin for her mental health. At the June 11 event, Rodriguez got candid about how her depression, anxiety, and suicidal thoughts took their tolls while she was filming the final season of her hit CW series, Jane the Virgin. The actor told NBC News' Kate Snow about the "tumultuous" season that emboldened her to focus on her mental health.

"There was a point where I couldn't… push through every single time anymore, and I'm one of those human beings… where I'm like, 'I'll handle it later. I'll deal with it later. I'll figure it out later. I just have to do this now.' All the while you're dealing with your silent little dragon in your head," Rodriguez told Snow, per People. "And it came to a point, and this season was the first season where I had to stop production. I had a really tumultuous season, and I was unafraid for the first time to be like, 'I can't.'"

Rodriguez added that she felt emboldened to discuss her mental health due to her fanbase of young girls who may be experiencing the same thing. "It was the reason why I took this talk," she told Snow. "It has to be a part of the conversations I have with these young girls. I can't just tell them to go out and make their dreams come true and then to ignore everything else."

Rodriguez has been candid about her mental health struggles in the past. In a February 2018 interview with Self, the Jane the Virgin star opened up about how her diagnosis with Hashimoto's disease, an autoimmune disorder that affects the thyroid gland, contributed to her "debilitating panic attacks and anxiety." She told the publication about the tolls of not taking care of herself, "[Hashimoto's] affects so many aspects of your life. I've had it for so many years… that rebellion of not taking care of myself can't exist anymore."

"I started dealing with the idea of — that same concept that I think your husband was talking about — everything is going to be better when I’m gone. Life will be easier. All the woes will be away, all the problems … Then I wouldn’t have to fail or succeed, right? Then all this surmounting pressure would go away. It would just go away."

At the event, the actress also got incredibly candid about suicidal thoughts. "I felt that before, not too long ago, and it's a very real feeling. It’s just new territory. For me, it was very new territory," she told the NBC correspondent.

Rodriguez rose to fame in 2014 as Jane Villanueva in the CW telenovela series Jane the Virgin, which follows mom-to-be Jane after she's accidentally inseminated during a routine doctor's visit. The fifth and final season is slated to wrap up later this summer. Recently, she starred in the Netflix film Someone Great, a charming rom-com that navigates heartbreak and friendship.

Following the discussion at the Kennedy Forum, Snow gave Rodriguez a hug and commended her for speaking her truth. Rodriguez then replied, "It feels brave right now. It feels like I'm at the top of Mount Everest, but it feels good."

As the National Institute of Mental Health has noted, depression is one of the most prevalent disorders in the country. Given these statistics, it's commendable that Rodriguez is using her platform to make the subject matter all the less taboo.

If you or someone you know is experiencing suicidal thoughts, call the National Suicide Prevention Hotline at 1-800-273-8255 or text HOME to the Crisis Text Line at 741741. You can also reach out to your local suicide crisis center.