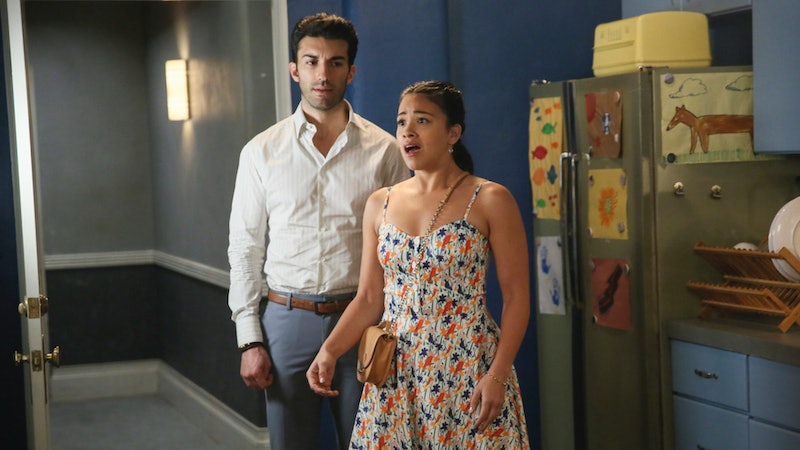 This article contains spoilers for Season 4 of Jane the Virgin.

Fans have been reeling from the shocking reveal at the end of the Jane the Virgin finale for months, and finally, it seems as if there will finally be answers to the biggest mystery of all. The first trailer for the final season of Jane the Virgin focuses on Michael's fate and possibly even teases another major telenovela-style twist.

In case you need a recap on the show's many twists and turns, Michael (Brett Dier), suddenly and tragically died in the middle of Season 3, as the result of a sudden spike in his blood pressure after being shot by Sin Rostro in the Season 2 finale. Jane (Gina Rodriguez) mourned the loss of her husband and longtime love, and eventually memorialized their love story in a best-selling romance novel. And — and more importantly to some fans — after she moved on from Michael's death, Jane eventually realized that she was in love with her son's father, Rafael (Justin Baldoni). In fact, he was about to propose when the two of them discovered that Michael wasn't dead after all.

And if viewers are still reeling from that discovery, they're not alone; the first trailer for Season 5 shows the Villanueva family reacting to the shocking turn of events, with Rogelio de la Vega (Jamie Camil), even fainting after discovering that his best friend is "back from the dead."

In true Jane the Virgin fashion, the trailer mixes its dramatic, telenovela twists with plenty of comedy, including Jane telling someone that the family isn't moving, "because my husband just came back from the dead." Even more hysterically, Rogelio spends some time repeating his name as dramatically as possible, in order to hopefully jog Michael's memory of their beautiful bromance. And while the moment is played for laughs in the trailer, it could be a clue that the final season of Jane the Virgin has one more classic telenovela twist up its sleeve.

Despite their long-standing friendship, Michael appears to have no recognition of Rogelio in the trailer, which could support the popular fan theory that Michael has amnesia after his "death." After all, amnesia is such a popular trope in soap operas that Michael even faked having amnesia after waking up in the hospital in the beginning of Season 3. In April 2018, show runner Jennie Snyder Urman revealed that the show purposefully had Jane's grandmother, talk about stereotypical telenovela tropes in order to distract viewers from the major reveal; it wouldn't be completely out of the realm of possibility for the show to be getting ready to set up yet another major surprise.

“We were very careful about not tipping it. Setting the table for an expectation of a telenovela plot twist," she told Refinery29 at the time. "We were certainly priming the audience and trying to purposefully lead them in one direction so that ultimately [Michael's return] was as big of a surprise as it could be. ... There’s even a further line that I decided to save for the beginning of act 5," Snyder Urman revealed to the outlet. "Jane sees Michael, and I wanted to end on him, so we would leave the audience with the maximum gut punch and not too much time to process." Process what, exactly? Amnesia? It could be.

In 2017, Snyder Urman also revealed that Michael's death and eventual return had been planned since the very inception of the series, which she explained to The Hollywood Reporter after the Season 3 twist. "It was also a decision made very early on, when I thought about our story as a whole. And even in Season one, I knew it would be a hard thing to actually do, which is why there was a line (which many of you noticed) about how Michael would never stop loving Jane," Snyder Urman told the outlet at the time. "Honestly, I put that line into the script at the last minute to hold our feet to the fire, to make sure we went through with it."

More recently, star Camil admitted that Snyder Urman has had the entire series mapped out since the beginning, which seems to confirm that the major Michael twist has been part of the show's telenovela DNA since the start. "We respect Jennie Urman and her vision [so much]. Since day one, she knew and was super clear that Jane The Virgin would have a life-span of five seasons," he told Bustle.

While fans will have to wait until Jane the Virgin returns on March 27 to find out for sure how and why Michael was able to return from the dead, it's clear that the show still has plenty of twists and turns in store for its final season.

More like this
'Succession' Season 4 Will Be An "Absolute Banger" According To Cousin Greg
By Bustle Staff
'The Crown' Season 6 Has Suspended Filming "Out Of Respect" For The Queen's Death
By Bustle Staff
The Banned 'Friends' Ad Shows Monica As You’ve Never Seen Her Before
By Sam Ramsden
Ashton Kutcher Wants Danny Masterson “To Be Found Innocent” In Rape Retrial
By Jake Viswanath
Get Even More From Bustle — Sign Up For The Newsletter
From hair trends to relationship advice, our daily newsletter has everything you need to sound like a person who’s on TikTok, even if you aren’t.