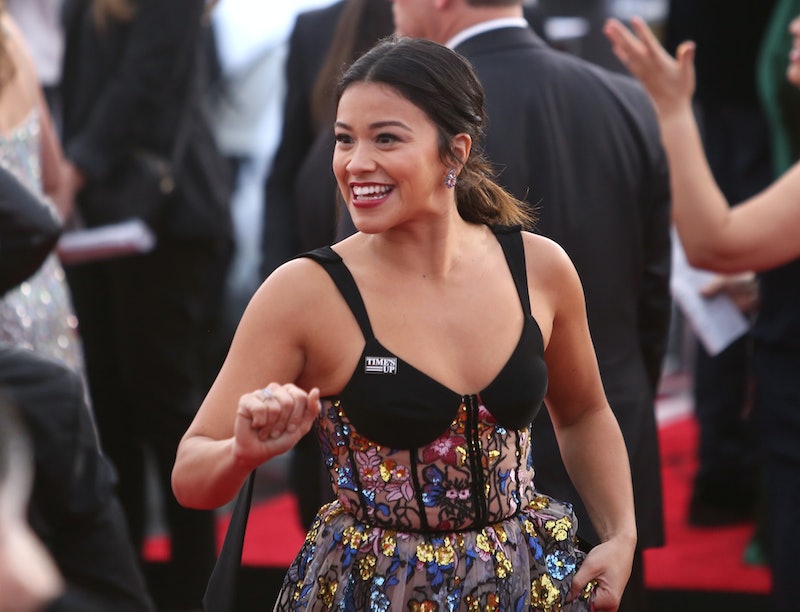 Since her breakout role in The CW’s Jane the Virgin, Gina Rodriguez has been a symbol for Latinx excellence in entertainment for many people. From her inspiring “I can and I will” speech when she won the 2015 Golden Globes Award for Best Actress in a TV Comedy, to her philanthropic side hustles, she has been a beacon of success and light for many — especially those who share her Puerto Rican roots.

But Rodriguez has also long been criticized for actions that have been perceived as anti-Black. In 2017, she posted a photo on Instagram of her hanging out with other white-presenting Latinx entertainers in Hollywood with the caption, “Fiercely Latina. #Latina Power.” When many people on Twitter criticized the lack of Latinx diversity present, Rodriguez claimed that Afro-Latinx entertainers, like Orange Is The New Black actor Dascha Polanco, were invited to the function but didn’t show. (Polanco later tweeted that she had never received an invite.) Then there were her comments that Latinxs “need [their] own Black Panther,” her assertion that Black female actors make more money than Latinx female actors, and that time she interrupted Yara Shahidi to say “all women,” in an interview where Shahidi was specifically asked about being a role model to Black women.

Most recently, during an interview on Sway In the Morning, Rodriguez broke down in tears as she addressed the backlash against her, saying, “The Black community was the only community I ever looked towards growing up. We didn’t have many Latino shows and the Black community made me feel like I was seen. So to get 'anti-Black' is to say I’m anti-family.” She continued, saying that her father is a “dark-skinned” Afro-Latino, so the criticism was especially rough for her. This only brought further backlash for the actor when people pointed out that her father's skin, while darker than Rodriguez’s, is still very light.

But this attitude, as disappointing as it is to many, is also not uncommon. As a Puerto Rican myself, I have seen firsthand how discussions about colorism in the Latinx community can sometimes sweep the topic of race under the rug. In Puerto Rico, there’s a common ideology that there is one multiethnic race — a blend of genes from the white colonizer, African people who were kidnapped and enslaved, and the island’s native Taíno people. In Puerto Rico, Puerto Ricans are Puerto Rican — not any particular race.

As an Afro-Boricua, or Puerto Rican, who benefits from looking racially ambiguous, I experienced this flattening of my identity myself. My grandmother would constantly dote on me for having all of the “right” features: Medium-light skin, curls that made my hair big but not too big if styled correctly, and full lips that were “just full enough.” While the idea of ambiguity might sound nice in theory, it ultimately silences any further question about how racial makeup influences one’s lived experiences. It also simultaneously emboldens white-presenting folks, such as Rodriguez — perhaps unknowingly — to be ignorant of their own privilege. This myth of “mestizaje,” or racial mixture, doesn’t just contribute to the erasure Afro-Puerto Ricans experience on a daily basis, but also continues to feed the underlying racism that exists in Latinx culture.

As Latinx folks perpetuate this idea that “we are beyond race,” Afro-Latinx people in America and Black people across Latin America are being erased. When you look at Spanish-language entertainment, the majority of the actors are white-presenting people: As Kat Lazo of “The Kat Call” said, “Just Google ‘top novela stars’ and you’ll realize [they are] more on the European side.”

The problem extends beyond representation, as many Black communities in Latin America don't have their basic standards of living met. Many live in immense poverty due to discrimination in academia and the workforce, experience hate crimes from white Latinxs in their countries, and aren’t receiving the adequate healthcare they need to survive. While the culture preaches a colorblind mentality, its people internalize all of these images and prejudices. Our family members will remind us that we are a mixture of all of these races, but in the same breath tell us that we should be marrying lighter skinned Latinx people “para mejorar la raza” — or uplift the race. This is the exact ideology that has been used to oppress Black folks internationally. It’s precisely why many Afro-Latinxs may identify with their Blackness before their Latinidad.

“Afro-Latina is a term that I use for convenience purposes, when I’m saying ‘I’m a Black woman while culturally I feel my community is in Latin America,’” Ain’t I Latina founder Janel Martinez told Oprah Mag. “But we were Black before these terms, and we are Black after.”

Instead of unifying people under the pretense of one culture, the mestizaje myth does exactly the opposite: it tells Black folks that if you choose a colorblind mentality, you don’t care to see them or their problems at all. In order to truly move forward as a culture, we really only have one option. It's important for those with privilege step back and listen to Black folks. You can’t consider the Black community “family” until you start inviting them to the table to eat.