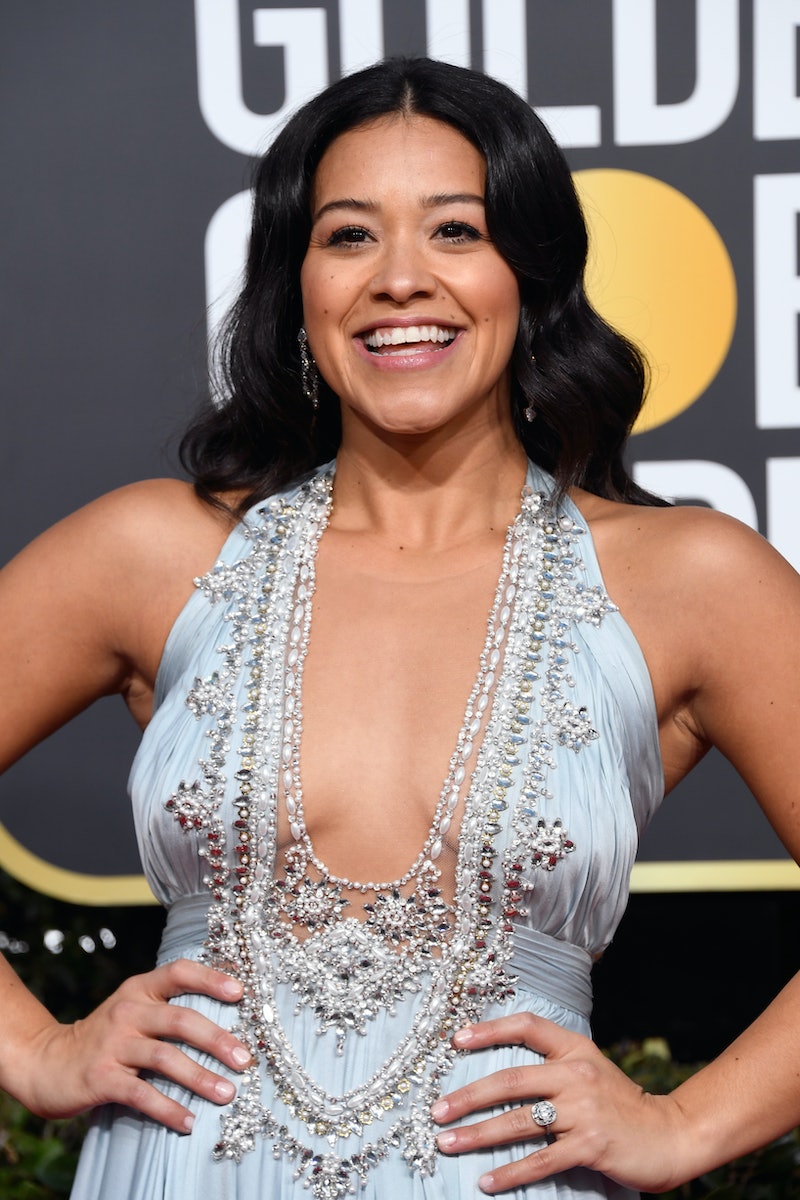 Unlike her character's nuptials on Jane the Virgin, Gina Rodriguez's recent wedding comments show her special day to future husband Joe LoCicero won't be over-the-top. At the Wednesday premiere in Hollywood for her Netflix movie, Someone Great, Rodriguez briefly discussed wedding details with Entertainment Tonight. During her interview, The CW star made it clear that she's not focusing on materialistic stuff.

"Pizza, hopefully Joe and my family. That's about it. I'm a simple girl."

This truly sounds like the perfect wedding. What more do you need besides the groom, loved ones, and the delicacy that is pizza? Rodriguez definitely knows what she's doing and how to throw a celebration that will be please most everyone.

It certainly seems that the Carmen Sandiego actor is ready to say "I do" to LoCicero without all of the frills and hassle that usually comes with wedding planning. Plus, it sounds like Rodriguez wants her nuptials to be about love and the things that make her happy, rather than the details that a wedding usually becomes about, i.e. money, flowers, favors, table settings, etc.

Ever since saying yes to LoCicero's proposal and confirming their engagement to People in August 2018, Rodriguez has stated that all she cares about is marrying the love of her life. At one point she even wanted to avoid the wedding planning altogether and just show up on the day. As she told The Talk in September 2018, "So, as of this Sunday, I feel like we're going to elope. It is such much drama." She continued,

However, after she heard everyone else's ideas for her wedding, she was like, "Well, I don’t know about that."

Believe it or not, but in January Rodriguez revealed she almost married LoCicero after the Golden Globes. While chatting with USA TODAY, she dished,

"[At] the Golden Globes, I loved my dress so much. It was the first time that I was like, 'Can I purchase this dress after I wear it? I want to own this dress.' And Joe was like, let's just go right now! You're done up, I'm done up. Let's do it!"

However, they didn't get married. "And then we went to the after parties instead," she said. "But it could've been that night! If I didn't have to direct the next day..." She also said that the wedding will be small and they probably won't elope. "If you tell people you're eloping, that's not really eloping," Rodriguez noted.

Not only does it seems like the JTV star is helping plan her wedding, but she's also trying avoid any unnecessary drama, while ensuring the the wedding remains about love and happiness. Whenever or however Rodriguez and LoCicero get married, there's no denying their day will be focused on the most important elements, including pizza.